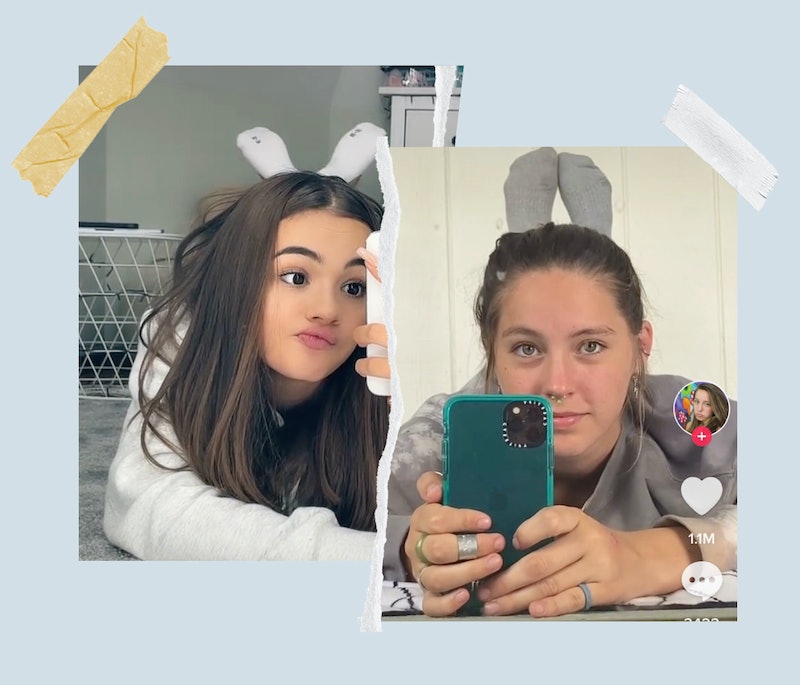 Every day TikTok gives us more questions than answers. What is a “simp”? What is baked feta pasta and why is it viral? Now, we must turn to Google to ask a question we never thought we’d have to ask: “what is the Bugs Bunny challenge on TikTok?” If you’ve seen a lot more feet on your For You page — and aren’t part of, uh, Foot TikTok — this trend is probably why.

For starters, it has nothing to do with the new Space Jam movie or the redesign of Lola Bunny that had some people asking why the cartoon rabbit wasn’t *checks notes*... sexy anymore? The challenge is dubbed as such because it features a song that includes the lyrics “Bugs Bunny” and involves making your feet look like bunny ears.

Each video starts with the person lying on their stomach, usually facing a mirror. Then, they pop their feet, usually in white socks, over their head to make them look like little rabbit ears. Finally, they flex, point, and wiggle their feet to further emphasize their new lil ears. And that’s it. That’s the trend. Well, there is a more salacious/thirst trap-y second half to the trend which some people have chosen to omit from their TikToks. You can see it if you scroll through the TikTok audio. Whether you view those is between you and the TikTok gods.

But what does Bug Bunny have to do with any of this? The trend features a slowed-down version of the song “Гучи”, which translates to “Gucci,” by Russian artist Timati featuring Egor Kreed. (The part recognizable from TikTok starts at 1:48.) The lyrics heard in the TikTok challenge roughly translate to “I'm the dirtiest rabbit, Bugs Bunny/Throwing money in the sauna, bucks in the bath/I mix Mentos with Cola for fun.”

The phrase “баксы в ванне,” which translates to “bucks in the bath,” sounds a lot like “Bugs Bunny.” It’s a pun. The challenge is based on a pun.

Though the trend appears to still be fairly new, Egor Kreed, one of the artists on the song, has done the challenge a couple times. Once, he did it with tiny pigtails atop his head. One thing to keep in mind if you plan to try the Bugs Bunny challenge: Make sure the bottoms of your socks aren’t disgusting.