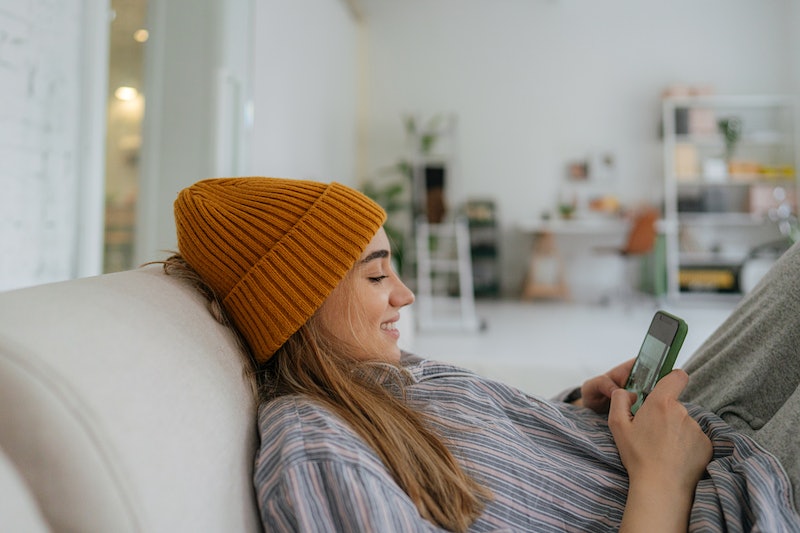 Instagram can be an awesome place to while away a few minutes — where else can you see somebody feeding their cat ice cream in Japan? — but it also has a problem: fake followers. Accounts with thousands or millions of followers might have artificially inflated numbers because of followers who aren't exactly, well, real: they're created, by bots, companies, or individuals, to artificially boost follower numbers and make accounts look popular. This harmless-seeming trickery can have serious consequences — both for the dynamics of the platform as a whole, and individuals who think, "Who can even tell if I buy fake followers, anyway?"

“We have a strong incentive to aggressively remove counterfeit content and block the individuals responsible from our platform," Raki Wane, Instagram's policy communications manager, tells Bustle. "We continue to proactively fight against bad content, including content that may offer counterfeit goods, with sophisticated spam detection and blocking systems." Wane says the company's artificial intelligence system performs a million sweeps a second (!) to catch and remove spam and fake accounts, including blocking millions of fake accounts when they try to register. Wane says third party services or apps that generate fake likes, follows, or comments can also be detected by the company's technology.

Why Are Fake Followers An Issue, Anyway?

False accounts on Instagram are a far-reaching issue with some real consequences. In 2019, WIRED estimated that fake Insta followers cost brands $1.3 billion through paying "influencers" whose follower lists were inflated. A 2019 study estimated that over half of U.K. Instagram users had done some kind of Insta algorithm fakery, including buying followers or likes. Fake accounts are often part of broader networks created for a purpose, like making a particular band popular, rather than isolated actors. They may also be based in one country but follow and comment exclusively on content posted from another, like the U.S.

Bots and faux followers can sometimes be accumulated for less malicious reasons. A new podcast might buy fake followers to make it look as if they've already got a big fanbase, so people will be more likely to tune in. But they can also be dangerous. Instagram and Facebook produce a monthly Inauthentic Behavior Report on how fake followers on their platforms are used to "manipulate public debate" on everything from the U.S. election to the coronavirus.

It's much more challenging to identify fake followers as a consumer — an average Jane with an Insta account — than as a moderator. "Our systems examine thousands of account attributes and focus on detecting behaviors that are very difficult for bad actors to fake, including their connections to others on our platform," Wane says. For the average person scrolling through Instagram, there are two obvious signals that might indicate there's fakery going on: if an account receives a ton of new follows from accounts that were created really recently, or if the followers' accounts have been dormant for months until they're called into action to follow a particular person or brand.

Just receiving an influx of new followers isn't enough to determine that an account is being artificially boosted. After all, people do become overnight sensations or go viral, and they can attract thousands of legitimate new followers in a short period of time. Just because there's no profile picture or photos and they comment once in a blue moon doesn't mean they're fake; they could just be a grandma from Grand Rapids who rarely uses the app.

What Happens To An Account That Buys Fake Followers?

When it comes to the consequences of fake followers, there's not one hard-and-fast punishment. Instagram assumes users aren't actively trying to game the system, so people get the benefit of the doubt. On the individual level, accounts proven to be paying for fake followers (or selling them) can be punished by being locked out of the account, for example. If Instagram notices patterns of repeated abuse, they can ban the user permanently.

But what if spammers or bots are following you all on their own? If you notice that you're getting followers who seem suspicious, or spot some accounts that seem suss, Wane suggests unfriending or blocking them and reporting anything that doesn't seem right. And remember: If the next big thing on Insta, complete with millions of new followers, seems too good to be true, it might be. Or, you know, they might have just gotten a really cute cat.