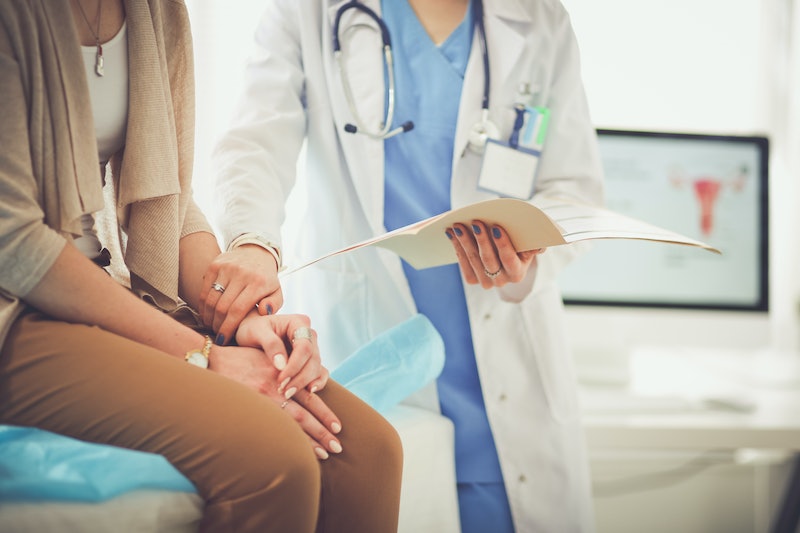 In this week's Sex IDK column, Emma McGowan, certified sex educator and writer, answers your questions about tying your tubes when you're young.

Q: Why wouldn't my doctor tie my tubes before I was 30? I was ready at 23, but had to wait. I have never wanted children and am very glad I had a tubal ligation three years ago.

When it comes to the decision to get your tubes tied (aka get a tubal ligation, aka permanently sterilize yourself) you’d think it would be a “my body, my choice” kind of situation, right? After all, you’re the one who would have to either carry a fetus to term or get an abortion, should you become pregnant. But despite that fact, it’s actually really common for doctors to deny people with uteruses who don't have children or who are young a tubal ligation. You are not alone in this one. Following the June 2022 decision by the supreme court to overturn Roe v. Wade, you may have some questions regarding tubal ligation and if it’s something that may be the right choice for you.

So why do doctors deny this medical procedure to so many women and other people assigned female at birth (AFAB)? There are a few different answers to that question, depending on who you’re talking to. To some people who have been turned down, the answer is pretty clearly sexism. There’s a cultural belief that all women and AFAB people will want to be mothers — some day, if not today. And so doctors may tell people that they shouldn’t do an irreversible procedure because they just don’t know their own minds yet, even if you've known you don't want children since the first time your mom tried to hand you a baby doll.

Other reasons doctors might give are that the person doesn’t have kids yet, or maybe a future spouse might want kids, or they might regret it. It’s all different notes in the same song: Someone other than the person requesting the surgery knows better than they do.

Kae Burdo, an AFAB nonbinary person and sex educator, tells Bustle that they’ve never wanted to be pregnant or give birth. That’s not to say they’ve never wanted kids; they actually already care for the children of some of their partners, as well as their younger siblings. They’re also married to a woman who could biologically carry a child. They knew that a pregnancy would trigger gender dysmorphia for them, but they tell Bustle it took three tries to finally get a referral for a tubal ligation.

First, Burdo was given the same reason so many other women and AFAB people are given: Getting your tubes tied is permanent — and you may regret it later. The second time, the doctor said that she didn’t want to do it because “IUDs were working” for Burdo and therefore she didn’t want to perform an “invasive” procedure.

However, while the IUD was doing its job of not getting Burdo pregnant, it was also very invasive for them. They expelled their first IUD and the second one embedded in their uterine wall, which resulted in two providers pulling three times to get it out, as well as such heavy bleeding that Burdo thought they were going to have to go to the ER. It was after that horrifying experience at age 28 that Burdo asked for sterilization the third time — and then, the doctors didn’t hesitate. They gave them a referral and, after the 30-day waiting period required by Medicaid, Burdo got their sterilization.

One thing that Burdo wasn’t told was that the risk of sterilization failing is higher when a person gets the procedure done at a younger age. According to the U.S. Collaborative Review of Sterilization (CREST) study, which followed up with 10,685 sterilized women for up to 14 years, the efficacy of sterilization varies based on the type of procedure (there are nine types of tubal ligation) and the age of the person getting the procedure done. The researchers found that the risk of pregnancy was highest among women sterilized at a young age who had one of two procedures: bipolar coagulation (in which an electric current cauterizes a small section of the Fallopian tube) and clip application (in which clips are placed on the Fallopian tubes, blocking them off).

Which begs the question, why don’t doctors just say that? Personally, I’d be much more responsive if a doctor told me, “A tubal ligation is more likely to fail if you do it now, so let's wait a couple years,” rather than, “But what about your future hypothetical husband?”

If after a patient has been counseled and she wants to go ahead with a tubal ligation, then there is absolutely no medical reason why she shouldn't get [one].

Dr. Jen Gunter, an OB/GYN, women’s health advocate, and author of The Vagina Bible, tells Bustle that it might not be just sexism — or even the potential failure rate — behind doctor’s advice to wait. She points to a 1999 study from Center for Disease Control (CDC) researchers that included 11,232 women aged 18-44 years who had tubal sterilizations between 1978 and 1987. Of the women under age 30, 20% regretted having the surgery. Gunter says that 20% is “high with surgery” and points to the less than 1% regret rate for people who have had abortions as a comparison.

“This doesn't mean a woman under 30 shouldn't have a tubal [ligation],” Gunter tells Bustle. “It just means she need to be appropriately counseled about other options, such as IUDs, the Implant, DMPA, and vasectomy [for a partner with testicles]. These are the methods with similar efficacy as a tubal ligation.”

For some people considering tubal ligation, that pre-surgery counseling may feel like “pushback,” Gunter says, but because 20% is a high rate of regret, “it would be negligent not to mention that rate or to not discuss other options.”

“If after a patient has been counseled and she wants to go ahead with a tubal ligation — barring medical reasons that she shouldn't have an anesthetic or surgery — then there is absolutely no medical reason why she shouldn't get a tubal ligation,” Gunter says. “This process of counseling does not need to take years or months. While I don't do tubal ligations any more, I used to ask women of all ages to give my counseling about other methods a few days consideration before booking the surgery.”

For people who want to get a tubal ligation and are concerned about being rejected, Burdo suggests if you’re refused by a provider, make sure it’s noted in your chart “so you can point to a consistent history of asking.” That can bolster your argument as you continue to ask for the surgery with other doctors.

Ultimately, the decision to have a tubal ligation should be in the hands of the person requesting it. But depending on your doctor, they may deny it because of sexism — or they may just be offering you other options as due diligence. It’s your job to determine what you want to do with that information.

Rocca, et al. (2015) Decision Rightness and Emotional Responses to Abortion in the United States: A Longitudinal Study. PLOS One, https://journals.plos.org/plosone/article?id=10.1371/journal.pone.0128832#sec006