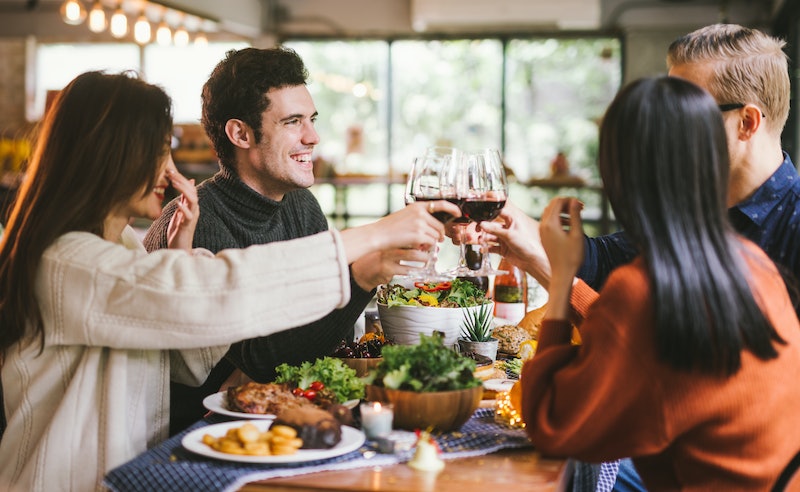 As the Americans are gearing up for their Thanksgiving festivities — defrosting turkeys, deciding where on the couch they’re going to take their post-feast naps, and making battle plans for storming their favorite electronics superstores — Canadians are looking ahead to a totally normal, late-autumn weekend. And it’s not because they are cantankerous Scrooges who hate giving thanks — actually, Canadians got on the gratitude train early and had their Thanksgiving celebrations way back in October.

In fact, some have even argued that Canadians hopped on the Thanksgiving train really early — as in, first — decades before the Americans did. In 1578 — more than 40 years before the American pilgrims — English explorer Martin Frobisher held the first Thanksgiving celebration by a European in North America in Newfoundland. He and his crew were giving thanks for their safe return from a treacherous exploration of the Northwest Passage. Some people (mostly Americans) have argued that Frobisher’s Thanksgiving doesn’t count as the first Thanksgiving because a proper Thanksgiving is officially held in gratitude for a good harvest, not for surviving a dangerous icy hellscape. But since fighting about who held Thanksgiving first seems to go against the spirit of the holiday, I think we can all just shake hands and agree that the indigenous peoples of North America were giving thanks for good harvests and bountiful food long before the Europeans showed up.

Thanksgiving was observed sporadically by Canadians in the 17th and 18th centuries and with more regularity in the 19th. The day was finally formalized as a national holiday in 1879. So, what’s the difference between Canadian versus American Thanksgiving?

In Canada, Thanksgiving Day is the second Monday of October. Canadians automatically get that Monday off in most parts of the country, but in Atlantic Canada (Prince Edward Island, New Brunswick, Nova Scotia, and Newfoundland and Labrador), it’s an optional holiday, so some businesses might give employees the day off, but others might not.

In the U.S., many people argue (unsuccessfully) that Christmas decorations shouldn’t go up until after Thanksgiving, but in Canada, there is no such barrier. The lights and wreaths start showing up the day after Halloween, if not before.

The actual day of celebration has moved around several times throughout history, but today, Monday is officially Thanksgiving Day in Canada. As the second Monday of the month, it also lines up with the U.S.’s Indigenous Peoples’ Day and Columbus Day.

Even though the official day is on Monday, it’s generally accepted that you can have Thanksgiving dinner at any point during the weekend. So if you want your full extended holiday to bask in the post-meal coma, you can plan ahead for a Friday or Saturday feast.

Now, Canadians celebrate Thanksgiving for similar reasons to Americans: It’s a time to gather family and friends for a festive meal. But this hasn’t always been the gist of the holiday in Canada. Following the 1578 story of explorer Martin Frobisher, this special meal was held to thank God for a safe journey. After that, there wasn’t much of a Thanksgiving Day until the 19th century, around the time when Charles Darwin caused a stir in common-held religious beliefs with his On the Origin of Species. This prompted the protestant ministers of Canada to seek an official holiday to thank God. The idea took root during the American Civil War: Thanksgiving became a day to spend in church (on a midweek day) to thank God for being Canadian and safe from the war.

Thanksgiving In Canada Is Not As Big A Deal As It Is In The U.S. — Especially If You’re In Quebec

Canadians enjoy Thanksgiving and see it as a time to visit with family and friends, but on the whole, they’re generally more low-key about it than folks in the U.S. Canadians are not as likely to travel across the country to celebrate with family, for example. In Quebec, Thanksgiving, also called “Action de Grâce,” is even less important; many Quebecers don’t celebrate the holiday at all.

The Food Is Similar At Canadian And American Thanksgiving Tables...

In general, Canadian Thanksgiving traditional food is fairly similar to that of the U.S. Turkey is usually eaten for Thanksgiving in Canada, though some choose to eat ham, chicken, or other proteins. The turkey is usually accompanied by stuffing, sweet potatoes, corn, gravy, and fall veggies like squash. The standard dessert is pumpkin pie. Sounds familiar.

...But Some Of The Recipes Are Slightly Different

While many of the dishes are the same for both Canadians and Americans, the usual Thanksgiving recipes are a little different. For example, in the U.S., pumpkin pie is generally a very sweet dessert, but in Canada it’s spicier, made with plenty of ginger, nutmeg, cloves, and cinnamon. Stuffing preparation also varies by region: In Canada and the northern states of the U.S., it’s made with rice and bread crumbs, while cornbread is a popular base in the southern states, and oysters in eastern areas.

The Sports Traditions Are Surprisingly Alike

As it turns out, Canadian Thanksgiving traditions are not all that unlike those in the U.S. Like Americans, Canadians watch football on Thanksgiving. The Canadian Football League hosts the Thanksgiving Day Classic, a double header that airs on national TV. The tradition was picked back up in 2021 after a two-year hiatus: In 2019, the games were not scheduled due to a proposed earlier start date to the CFL season, and in 2020, all the lockdowns put a halt to the event. Thankfully (no pun intended), the Thanksgiving Day Classic is back and here to stay.

The Parades Are Smaller At Canadian Thanksgiving

Since the holiday isn’t as big of a deal in general, there isn’t a massive parade like Macy’s Thanksgiving Day parade in New York City. Thanksgiving parades in Canada are generally smaller, local events. But they do have one — the Kitchener-Waterloo Oktoberfest parade — that is nationally televised, but it’s not solely for Thanksgiving, as it is an Oktoberfest celebration.

It’s Not A Big Shopping Holiday In Canada

Canadians don’t have a giant shopping day following their Thanksgiving; the biggest discount shopping day is Boxing Day, the day after Christmas. However, Canadians have picked up on American Black Friday to a certain extent, and the November discount day, along with Cyber Monday, is gaining ground in Canada. Apparently, it became popular for Canadians who lived near the US/Canadian border to travel south to take advantage of the steep discounts available in the US after its Thanksgiving. In order to encourage them to stay (and spend their money) in Canada, some Canadian retailers have started offering discounts on Black Friday, too.

For many Canadians, a long walk in the outdoors is an annual Thanksgiving tradition. Because Thanksgiving is in mid-October, it’s the perfect time of year for walking and leaf-peeping. In many parts of the U.S., it’s already too cold by late November to do a lot of outdoorsy stuff on Thanksgiving. However, many Americans are known to lace up their shoes and head outside for the annual Turkey Trot 5K race that’s held in multiple cities throughout the U.S.

Since the 19th century, Canada has proclaimed specific reasons to be thankful. For many years the reason was simply “Blessings of an abundant harvest,” and for the last 50 or so, the holiday has been celebrated “For general thanksgiving to Almighty God for the blessings with which the people of Canada have been favoured.” However, here and there — especially in the early days — there were more precise reasons, including the “Cessation of cholera” in 1833 and the “End of sanguinary contest in Europe” in 1814.

More like this
30 Clever Ways To Slide Into Your Crush's DMs
By Griffin Wynne, Carolyn Steber and Lexi Inks
Nicola Coughlan Shared A Lady Whistledown Excerpt From ‘Bridgerton’ Season 3
By Grace Wehniainen, Alyssa Lapid and Sam Ramsden
How To Turn Your Small Living Room Into A Cozy Nook For The Holidays
By Jessica Goodman
9 Tips For Hosting A Holiday Party In A Small Apartment
By Anna Davies
Get Even More From Bustle — Sign Up For The Newsletter

This article was originally published on November 20, 2015