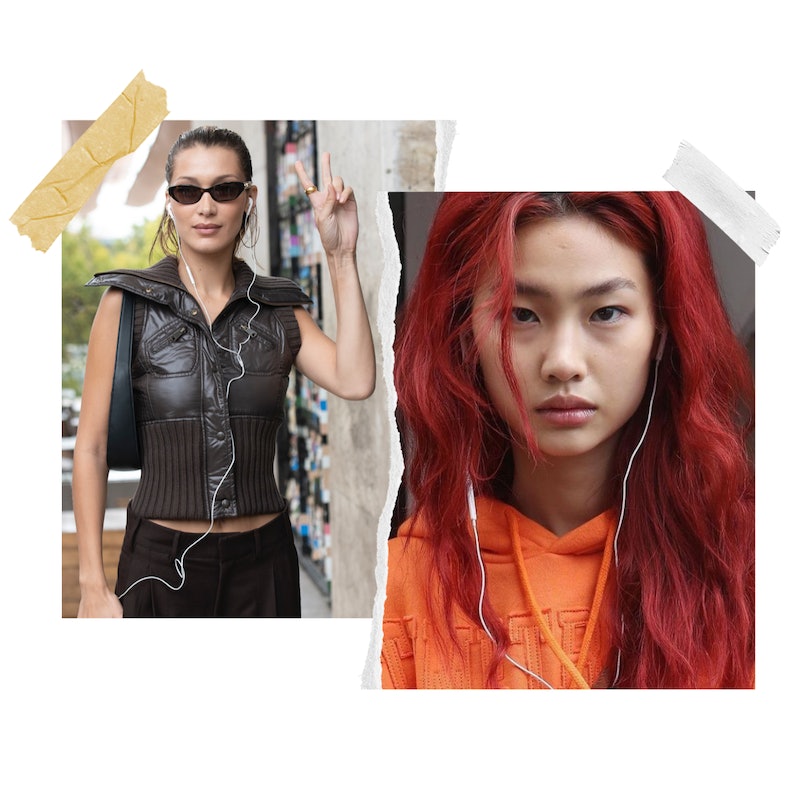 It didn’t take long after Apple came out with their wireless AirPods in 2016 for the internet to meme them into the unofficial headphones of the 1%. Of course, as with any new Apple product, they soon became ubiquitous. But as these tiny devices have grown in popularity, even becoming the world’s bestselling earbuds, a certain cadre of tastemakers are making wired headphones chic again.

First recognized by Vogue in 2019, the reentry of wired headphones into celebrity streetwear has gained newfound traction since TikToker @thedigifairy posted a viral “trend forecast” video on the topic at the end of September. Since then, the wired wave has only gained momentum — there’s even a niche @WiredItGirls Instagram account solidifying the trend’s place in today’s zeitgeist. The account’s bio puts it best: “tired: airpods. wired: wired headphones.”

But why are analog earbuds having a moment, now? “The wire exudes an effortless kind of energy,” Shelby, 24, the creator of @WiredItGirls, tells Bustle. “Being unbothered is the true luxury. Usually, the makings of an ‘it’ girl seem unattainable and luxurious whereas a simple wired headphone, anyone can have.” She adds that the current online romanticization of 2014-era Tumblr — where “younger people are looking at music as a whole aesthetic experience” — is also contributing to their zeitgeistishness.

From Lily-Rose Depp to the eternal trend-setter Zoë Kravitz, wired headphones have proven to be the hottest accessory hanging off any celeb right now. It’s all very, “Stars — they’re just like us!” But, if being trendy also means saving money and evading the multistep process of charging your AirPods, I’m ultimately here for it.

Before you cut ties with your corded earbuds, here are some of the trendiest celebs wearing wired headphones to make you reconsider.

Nothing says true “peace” like the carefree luxury of wireless headphones, a brown monochrome ’fit, and throwing up a peace sign for the paps.

No, that’s not Zoë’s costume from High Fidelity, though the retro over-the-ear headphones would be perfect for music buff Rob. Paired with a Canadian tuxedo and sunglasses, this is some textbook subtly chic Kravitz street-style.

That’s right — Squid Game breakout star Jung Ho-Yeon has given the green light to wired headphones. Run with it while you can...

Nothing says cozy like a fur-trimmed jacket, warm cup of coffee, and your trusty wired headphones. It can be tricky to avoid tangling your headphones with your face-mask straps, but balancing the two says, “I’m with the times,” in more ways than one.