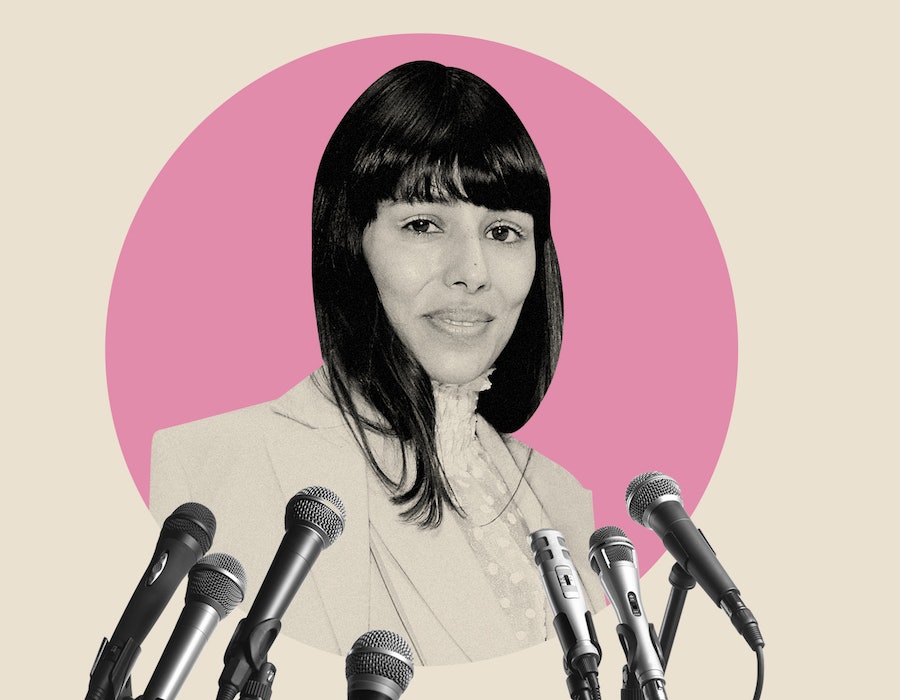 In Bustle’s Quick Question, we ask women leaders all about advice — from the best guidance they’ve ever gotten to what they're still figuring out. Here, Ceremonia haircare founder and CEO Babba Rivera discusses career wins in multiple industries, launching a business in a pandemic, and the worst unsolicited advice she ever got.

Babba Rivera’s not afraid to try something new. As the daughter of immigrants who fled Chile for Sweden before she was born, she was thrust into Swedish culture as the translator for her parents, who only spoke Spanish. “I had a lot of responsibility from a young age, and it’s something that’s shaped me into who I am today,” Rivera, 30, tells Bustle. “Doing something for the first time never scares me because I did that so much growing up. It’s instilled a lot of confidence in me and that confidence led me to be very determined to want to create a life for myself different from the one of my parents.”

Growing up fast at an early age helped Rivera be fearless in finding the best career fit. After a brief stint in the fashion industry, she realized she wanted in on the tech jobs her male friends raved about. A few networking meetings later, she began working with Uber, helping them launch in Sweden. Soon thereafter, in 2015, she was promoted to marketing manager and relocated to the U.S. But even as she started working with other companies to build their brands, Rivera realized that actually, what she really wanted was to start a brand of her own. Her heritage pulled her back to the drawing board.

“I started to feel this void for Latinx representation,” she says. “My entire life, I never saw myself represented anywhere and I grew accustomed to it.” Moving to the U.S. helped her connect with her roots, given that Latinx people account for 18% of the population, but she also felt acutely aware of the lack of representation for such a large swath of the country.

Around the same time, Rivera was on a mission to replace her daily beauty products with “clean” ones; that is, products formulated without parabens, sulfates, or silicone. She found that haircare was the most difficult to replace, without good options on the market. She thought about formulating her own products exclusively with plants, oils, and natural ingredients found in Latin American countries, and Ceremonia was born. The brand, named after the ceremony or ritual of applying beauty treatments in Latinx cultures, launched with its holy grail product: the Aceite de Moska scalp oil in October 2020. They’ve since expanded with a curl activating serum and as of March, shampoo and conditioner. But a lot happened in-between. Here’s how Rivera went from tech boss to beauty brand founder, and what she’s learned about running a business along the way.

What advice did you seek out when you started Ceremonia? Has that changed?

In the beginning, I was really curious to connect with beauty founders who had gone through the formulation process because it’s very different from selling clothes. There are a lot of regulations, testing, etc. I also connected with everyone in the tech industry I had access to to help me on my fundraising journey. Many of them ended up coming in as angel investors themselves, which was a big feeling of validation. People I had some sort of working relationship with in the past believed enough in me that they wanted to put their capital behind Ceremonia.

Did you ever have a backup plan for starting your own business?

Now that you ask, I probably should have asked that myself, but I didn’t. For me, there was never a plan B. I was just fully optimizing for plan A. I knew I was getting myself into the unknown, but was determined to figure it out.

I don’t mind change and I don’t hold on to, “Well it was supposed to be this way.” I’m very like, “OK we’re in a pandemic, and let’s make the best of it, and move on.” I prepared myself to be adaptive versus planning for a plan B.

Who’s your go-to person for advice?

If it’s product related, I go to our Ceremonia community. We have an app where I drop questions and within minutes we have a full-on conversation going about products with customers. I also use my investors a lot. I'm very open with them and I love to tap into them for advice. I find that a network of fellow founders is the most valuable.

I got unsolicited advice when I was fundraising last year. I was pregnant, but it was still early. A potential investor asked me if I had kids. I said “No, I don’t,” and I didn’t even get to continue the sentence before he said, “Good, don’t have kids. At the very least wait five to 10 years to have kids with the business you’re building.”

It affected me pretty hard because I thought maybe I shouldn’t be fundraising. I didn't feel ready to announce my pregnancy either. But then I spoke to female founders who have taken venture capital while pregnant or founded a company with a toddler and that was empowering. It reminded me that I get to pick my investors — and he was not someone I wanted to continue the conversation with.

Is there anything you’d want to tell your younger self about running a business?

Worry less. Because I grew up poor, the second I got my first job I was so scared of losing it and I think I sometimes didn’t fully recognize my own worth. I was just so grateful and terrified to lose what I have. Today, I’m much more fearless. I realize that the fact that I grew up poor is a strength because it means that I know what it’s like on the other side. I’ve gotten out of poverty once and I can do it again. That’s empowering knowledge to have.

My husband always asks me, “What’s the worst thing that can happen?” Whenever you feel like you’re letting fear get in the way, ask yourself this and play out that scenario. Once you say it out loud and play it out, it’s either not likely it will happen, or not even that scary after all.

More like this
Ayurvedic Principles & Family Are At The Root Of Fable & Mane
By Justine Knight
Bondi Sands’ Everyday Skincare Range Just Got Even Better
By Justine Knight
Not Sure How To Style Bangs? Make These Easy Hairstyles Your Go-To
By Olivia Rose Ferreiro
This Week’s New Makeup Releases & More Beauty Headlines
By Audrey Noble
Get Even More From Bustle — Sign Up For The Newsletter