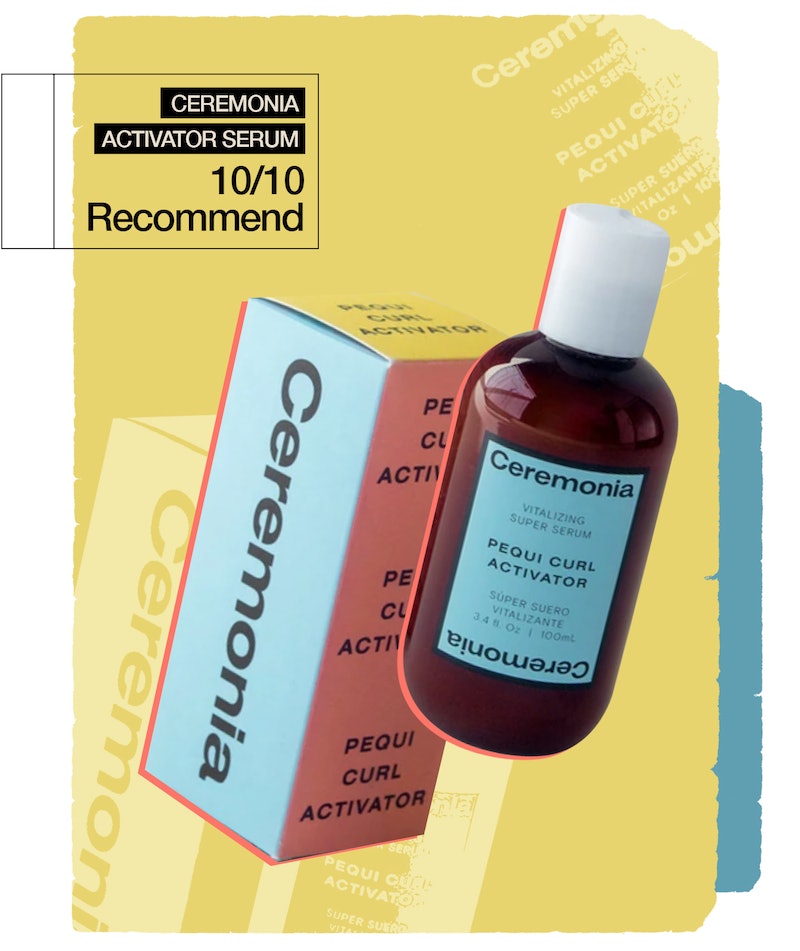 Ever since I grew out of my Shirley Temple curls, my hair has never decided whether it’s straight, wavy, or curly. Most days, it settles on a frizzy mix of all three. I’ve never really known how to get my hair to do what I want it to: Ideally, I’d have Elaine Benes ringlets, but I’ll settle for soft, bouncy tendrils that suggest a Botticelli painting. Is that so much to ask for? Well, with an assist from the new Ceremonia Pequi Curl Activator Serum, it turns out my dream ‘do is achievable.

You know the saying: Curly hair never dries the same way twice. But, with almost nothing but time on my hands during the pandemic, I’ve been experimenting with a styling combo of Ceremonia’s serum and the Curly Girl method, a technique for keeping curls (and waves) hydrated and bouncy. And I’m a lot closer to understanding how to work with my hair rather than against it. Read on for the details of how I tamed my waves.

Long lauded in the natural hair community, the Curly Girl method developed a following on TikTok thanks to a viral audio that went, in part, "My whole life I've been brushing through my hair like this, and TikTok is making me realize that I think I actually have curly hair.” The basic tenets are only brushing your strands while they're wet, preferably while they're being deep-conditioned; styling by scrunching with a curl-enhancing product; and drying by plopping your hair on your head with a T-shirt, rather than a towel. (Rubbing your hair with a towel can mess with the cuticle, leaving your hair frizzier than before. Who knew!)

I adopted the Curly Girl method over the summer and noticed a difference in my hair from the first plop. Where before, my thick hair would air dry into a Mia Thermopolis-y triangle, it smoothed out, allowing individual waves to develop. But for scrunching, I used whatever hydrating creams I had lying around, most of which had been purloined from a colleagues’ desk back when I used to work at an office. It was fine, but sometimes left my hair a little crunchy or oily. Not ideal.

Enter Ceremonia’s newest product, launched on Jan. 25. My interest was piqued by the “curl activator” moniker; if the curls of my youth could simply wake up, I thought, I’d be on the express train to Elaine Benes-ville. The serum contains pequi oil, which is common in other curl-enhancing formulas to help waves sproing to life, while castor oil and murumuru butter provide moisturization. The travel-friendly bottle size suggests a not-so-far-off future where it could join me on trips to visit my family in Puerto Rico, where, thanks to the humidity, my curls tend to perform their best. At its $20 price point, it won’t break the bank to restock, but I’ve also found you don’t need to use a ton of it at a time.

I switched to using Ceremonia’s serum a few weeks ago, and I’m pleasantly surprised by how it’s helped define my hair’s texture through a very dry New York winter. The serum also smells amazing — a little musky, a little sweet. It hasn’t 100% restored the soft spirals my two-year-old self boasted, but my hair now air dries into uniform, soft, bouncy waves. Compared to six months ago — when my locks seemed to dry into second-day hair even though they had just been washed — it’s a vast improvement.

Given that my waves are significantly weighed down by a pandemic-induced lack of haircut, I’m confident that whenever I’ll be able to razor some layers in, they'll have even more body and life. I also love that I’ll be supporting a Latina-owned business with my future purchases. Curl serum + scrunch + tie dye T-shirt is by no means a magic formula for the ultimate hair of my dreams, but it’s a big step up from my pre-pandemic hair routine of doing… absolutely nothing.

More like this
Your Guide To The Octopus Haircut, The Chic Shag-Mullet Hybrid
By Danielle Sinay and Jordan Murray
I Dyed My Virgin Hair “Kendall Jenner Red” & Now I’m A Different Person
By Kimberly Perry
11 Bella Hadid Hairstyles That Prove She's A Beauty Chameleon
By Jordan Murray
"The Sachel" Is The New Haircut To Know Now
By Justine Knight
Get Even More From Bustle — Sign Up For The Newsletter