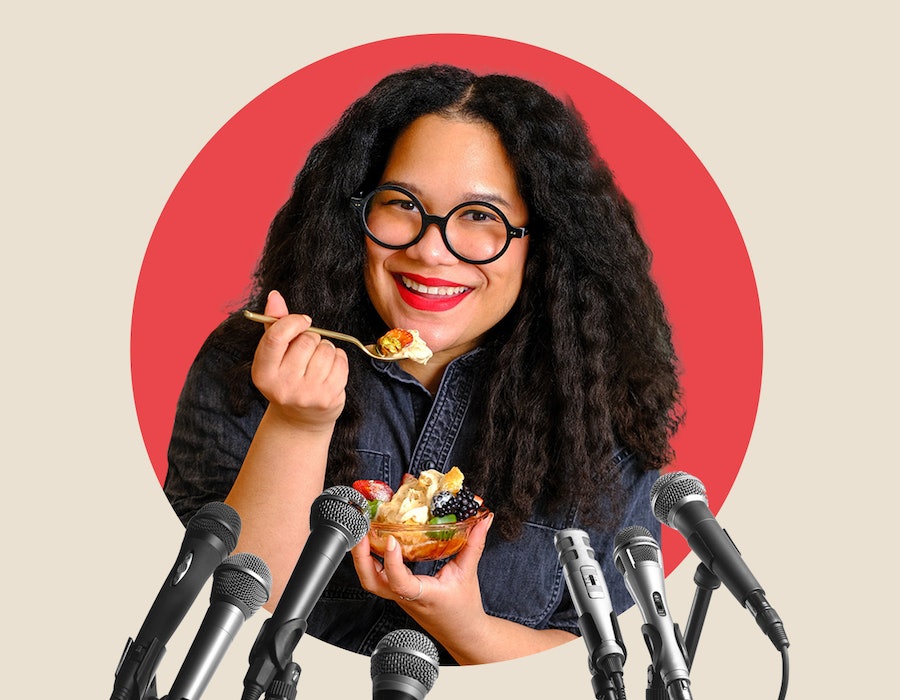 In Bustle’s Quick Question, we ask women leaders all about advice — from the best guidance they’ve ever gotten to what they’re still figuring out. Here, award-winning chef and Bakers Against Racism founder Paola Velez talks about finding the “why” behind her work and her approach to leadership during tough times.

For Paola Velez, “When one door closes, another opens” has become a guiding mantra in her career as an award-winning pastry chef, television personality, and co-founder of the nonprofit Bakers Against Racism. Velez will show you that she’s not the type to just wait around for the next opportunity to arrive, and her work experience shows exactly that. If another door isn’t open — for herself or for her peers — she’ll make one.

Such was the case when Velez was furloughed from her job as an executive pastry chef at Kith/Kin restaurant in Washington, D.C. restaurant at the start of the COVID-19 pandemic. Velez secured unemployment for her entire team before being informed that she couldn’t receive unemployment herself unless she was applying for jobs, which were nearly nonexistent for pastry chefs at the time.

“I was thinking, ‘Oh my god, the system is so backward. I pay taxes, I pay into unemployment,’” she tells Bustle. It didn’t take long for the Bronx-raised chef to look at the bigger picture and realize another group of taxpayers was being failed by the system without any grounds to advocate for themselves: the undocumented workforce.

Velez quickly turned her frustration into action — partnering with D.C.-based nonprofit Ayuda and Latin bar Serenata in April 2020 to create a month-long pop-up fundraiser. Selling donuts inspired by her Dominican heritage under the name “Doña Dona,” Velez raised over $1,000 for immigrant families in the D.C. area. But it was the emotional impact of the fundraiser that moved her the most.

“Folks would DM me saying, ‘Oh my god, you literally just put groceries on my table,’” she recalls, “It was very gut-wrenching.”

On the last day of the pop-up in May 2020, the murder of George Floyd made headlines across the nation. Velez found herself at a loss. “I realized that as long as we have melanin in our skin, we would always be looked at as other,” she says.

Fellow chef Willa Pelini tapped Velez to create a similar fundraising pop-up in support of Black lives, but Velez told her it “wasn’t enough.” Determined to create lasting change, Velez began compiling all of her resources from her Doña Dona efforts to facilitate a decentralized, ongoing nonprofit bake sale for anyone to join. The collective group would be called Bakers Against Racism, co-founded by Velez, Pelini, and chef Rob Rubba in June 2020.

Originally the goal was to involve 80 bakers, but Velez says the organization exceeded those expectations. “It was bigger than me,” she says, “and I try to keep it bigger than me.” Today, Bakers Against Racism has reached over 200 U.S. cities, 40 states, and four continents, raising over $2.5 million and counting for local anti-racist organizations, abortion funds, Ukrainian relief organizations, and more.

As for Velez, she’s still opening doors wherever she can — whether it’s making the cooking industry a safer place for those entering it or trying out new creative projects. Below, Velez discusses tips for building a socially conscious career, what it means to lead without ego, and the best advice she’s ever gotten.

You founded Doña Dona and Bakers Against Racism after you were furloughed from your job at the start of the pandemic. How did you find the momentum to pivot from a typically discouraging career milestone and turn it into such influential projects?

Honestly, I was really frustrated. I had just gotten my James Beard nomination [Rising Star Chef of the Year 2020] and I wasn’t expecting it. My biggest fear is becoming a supernova and burning bright for a short period of time and then just disappearing.

For the first few months of the pandemic, I didn’t even touch flour, butter, and sugar because I was frustrated. I had missed birthday parties. I had missed friends’ weddings. I wasn’t present in my life because I was trying to build a career. Then, it was all wiped away.

I was very numb. But even when I was a line cook in 2013 and felt hopeless, I would give back. I would work at a soup kitchen and I would have bake sales too for the hungry, because I knew [what that was like]. I was working on $7 or $8 an hour back then, and I knew what it was like to have to choose between paying rent and eating. I would give to others because, even if there was no answer in sight, there’s still the ability to help others. It gets me out of my head if I can help another person without feeling like I’m better than them because I’m not.

Building a decentralized organization so focused on collective efforts is a particularly powerful form of leadership. Do you have advice or any insight on how to achieve that?

I really had to come face to face with myself. I had to tell myself that if it’s fame and fortune that I’m looking for, it can’t be with Bakers Against Racism. If the goal is to be famous or to be known as this “activist,” it can’t be me. I can’t be the figurehead for this. [Bakers Against Racism] has to be something that other people can find refuge in, can find help, can find hope, can put their trust in. Especially now that the world is still a dumpster fire.

It’s almost like an ego death, making sure that you suffocate anything that could have intrusive thoughts of making [your mission] about self. A lot of nonprofits sometimes can go astray if the person in leadership doesn’t realize that it’s not about them. It’s about the mission, it’s about the community, it’s about the “why.”

You have created your own unique path in the food industry — constantly folding social justice into your culinary career. What advice would you give to someone who is also hoping to enter their industry with a socially conscious mission?

I didn’t make [Bakers Against Racism or Doña Dona] because I wanted to tell people about it. I knew that it was the right thing. Is [what you’re trying to achieve] activism work, or is it just doing the right thing? Do you want to be called an activist or do you just want to be a chef that wants to give?

Do you have certain people that you frequently go to for advice or guidance?

My close friends, my husband, and folks that aren’t in our industry, because our industry is very behind in HR policies and basic human rights. And then my friends [in the industry] like Rob Rubba. I also do love talking to Cheryl Day [owner of Back in the Day Bakery in Savannah, Georgia].

What is the best career advice you’ve ever gotten?

When I was 19, I would donate my time to elderly homes. I would sit with them, and we would talk. This one really beautiful soul told me, “Paola, when you think about work, you don’t have to strive to be the best. You just have to be good enough, stay consistent, and be good enough. And in that consistency, you’ll become a master of what you’re doing.”

How do you unwind after a long day?

I have no work-life balance. [Laughs.] Going out to eat and supporting my friends and supporting the industry [is how I unwind]. I have been trying to put my money where my mouth is. I think that it’s really important for other chefs to go and support each other. It’s not about competing, it’s about supporting [one another] and eating. That is a true spirit of hospitality that relaxes me. I don’t have to be on, I don’t have to be performing, somebody’s just taking care of me and I get to support them in tandem.