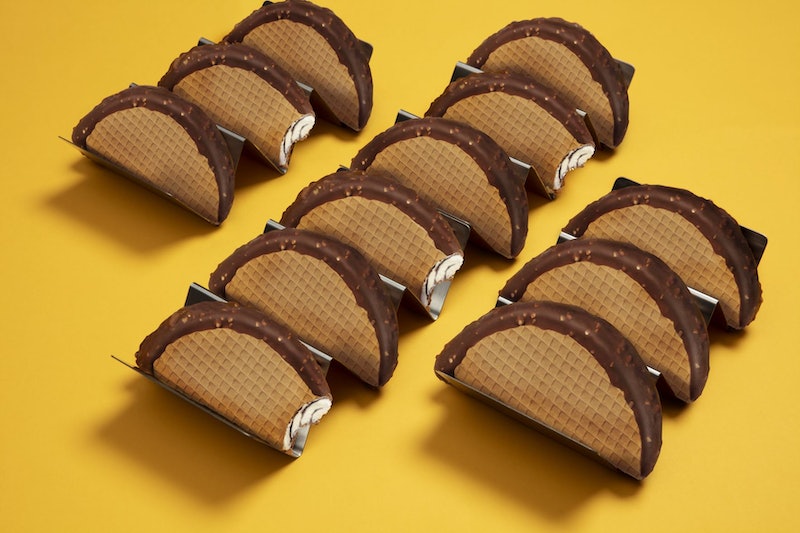 It’s officially the end of an era. For those of you who have exceptional taste when it comes to an ice cream truck treat, you likely already know what I’m talking about. The Choco Taco, a classic Klondike dessert, has officially been discontinued. Cue the wistful sighs from people with a sweet tooth everywhere.

For those unfamiliar, the Choco Taco, which fall under the Klondike dessert portfolio, includes vanilla ice cream with a chocolate swirl in a sugar cone (shaped like a taco shell) that is finished off with a milk chocolate coating and chopped peanuts. It’s similar to a Drumstick in flavor, but is unique in its shape. Choco Tacos were sold in single packages from ice cream trucks or gas station freezers, or in boxes of four at the grocery store.

Klondike made the following statement to Bustle:

The Klondike Choco Taco has unfortunately been discontinued in both 1-count and 4-count pack sizes. Over the past two years, we have experienced an unprecedented spike in demand across our portfolio and have had to make very tough decisions to ensure availability of our full portfolio nationwide. A necessary but unfortunate part of this process is that we sometimes must discontinue products, even a beloved item like Choco Taco. We know this may be very disappointing, but we hope you'll try one of our other great products, including Klondike Cones, Shakes, Sandwiches, and of course, our signature Bar available nationwide.

It’s no surprise that the people of the internet were gutted. Many shared their best memories of eating a Choco Taco (I, for one, always had them at soccer tournaments) and others shared their frustration. For the most part, users on Twitter talked about how upset they were that Choco Tacos were no more — despite not even eating them that often, but for the nostalgic principle of it all.

One Twitter user shared a video of a little boy screaming in the corner of a room with the caption “me finding out the choco taco is being discontinued even though i can’t remember the last time i had one” and it’s a total mood.

Others shared their reactions to finding out why exactly Choco Taco was trending on Twitter.

Some strategized how they’d get their hands on the last few Choco Tacos in stock before they’re wiped from shelves completely.

@ReallyCoolJohn shared another food take, wondering why some strange baked goods are still sold in stores instead of the Choco Taco. Seriously, who is buying Snoballs?!

One user assumed the discontinuation of Choco Tacos was yet another sad fact of our current world along with the current gas prices — although not being able to pick up a sweet, sweet taco is arguably worse.

User @abbythetweet shared their disappointment while also admitting they just discovered what a Choco Taco was: “There’s no FOMO quite like learning what a Choco Taco is on the same day you learn they’ve been discontinued. How is life fair, really?”

Regardless of your connection to Choco Tacos, you can admit losing something so nostalgic of Y2K culture always pulls on your heart strings. And you know what they say, if you love something let it go. After all, you can always just order a Drumstick or Klondike Bar instead when you’re jonesing something sweet.

More like this
I Tried The $20 TikTok Viral Oishii Strawberries — Here's What I Thought
By Sophie Hanson
Trust Me, Pickle Martinis Are The New It Drink Of The Season
By Emma Carey
The Finger Lickin’ Good KFC x HYPE Collab Serves A Bucket Bag For Chicken
By Darshita Goyal
13 Selfie Instagram Caption Ideas That Exude Main Character Energy
By Jessica Booth and Emma Carey
Get Even More From Bustle — Sign Up For The Newsletter