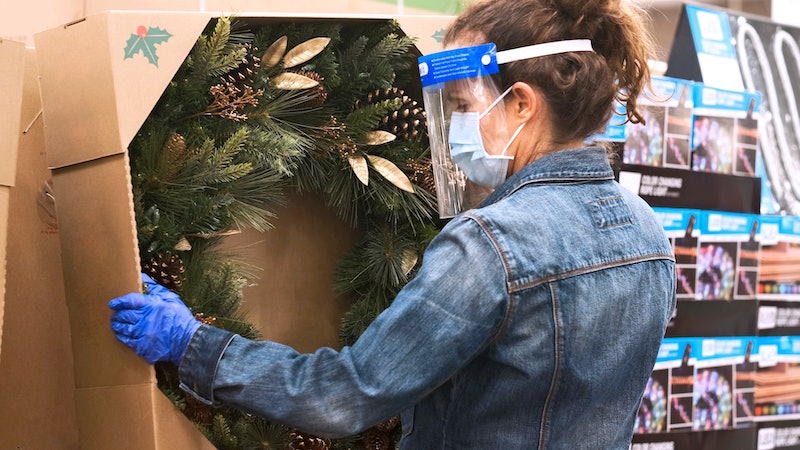 If the last eight months have taught us anything it’s that you can’t plan ahead at the moment. When lockdown first started, I got through it by setting myself little goals. Surely this will just last a few weeks? No? OK. Then everything will be back to normal by September, right? Definitely not. So, what will Christmas 2020 look like? Here’s how things currently stand.

Will Restrictions Be Eased For Christmas?

On Nov. 24, the government announced their plans to ease coronavirus restrictions over the Christmas period. However, due to a significant rise in cases over the past week and the discovery of a mutant strain of the virus, these plans have been cancelled and a new tier has come into force. For those in Tiers 1-3 (the majority of England), the five-day period where restrictions would have been eased has been shortened and will now only apply to Christmas Day. Those now under the new tier 4 restrictions can only celebrate Christmas with their current household/support bubble. In Wales, the law has now changed by law so that only two households are permitted to join together for Christmas Day, instead of three. You can also travel anywhere in England, Wales and NI to meet your Christmas bubble, except for tier 4 areas. In Scotland, it’s advised that that families only meet on one of the five days, and travel between the country and the rest of the UK “will not be legal” other than for “specific exemptions”. Northern Ireland has been granted a slightly longer period between Dec. 22 23 - Dec. 28, in order to allow people to travel across nations, but families can only meet up for one day between the allotted period.

What Are The Rules For Tier 4?

As of Dec. 20, the areas which are now under tier 4 restrictions are:

On top of restrictions set out in the lower tiers, those in tier 4 must adhere to the following measures:

Measures will be reviewed on Dec. 30, however Health Secretary Matt Hancock advised on the Andrew Marr Show that the highest restrictions may not be eased “for some time, until we get a vaccine going.”

Over the Christmas period (Dec. 23 — Dec. 27), travelling to different parts of the UK will depend on local restrictions. Families across the four nations can only meet for one day over the holiday period, and are advised to avoid travelling to tier 3 and 4 areas, and vice versa. As stated by gov.uk, you cannot mix with other households before Dec. 25 except in “exceptional circumstances” which may include travel disruption or a member of your bubble needing to self isolate.

Travel to Wales and Northern Ireland is permitted, but you’ll be unable to travel to Scotland. Per Sky News, First Minister Nicola Sturgeon explained that the ban will cover the entire festive period and that travel within Scotland will be allowed on Christmas Day. Police presence at the Scottish border will be increased, as Police Scotland’s chief constable Iain Livingstone told Sky News, adding that “these highly-visible patrols” will “deter anyone who might be considering breaching the coronavirus travel restrictions.”

In terms of people travelling to England from abroad, due to concerns surrounding the newly discovered COVID strain many European countries have closed their borders to the UK. Countries including Ireland, Belgium, Germany, Italy, and the Netherlands are suspending travel from the UK for at least 48 hours. France has closed its border completely to the UK, meaning freight as well as passengers cannot leave British shores. Prime Minister Boris Johnson will chair a Cobra meeting this morning “to discuss the situation regarding international travel, in particular the steady flow of freight into and out of the UK,” a No 10 spokesperson told the Guardian.

Transport secretary Grant Shapps advised that “the public & particularly hauliers not to travel to Kent ports or other routes to France” in a recent tweet, adding that his “department is urgently working with Highways England and Kent Council on contingency measures to minimise traffic disruption in the area.” Eurotunnel should also be avoided, police have said, and the M20 will be closed between junctions 8-11.

Channel crossing ferry services have been cancelled until further notice, as has Eurostar train services from London to and from Brussels, Lille, or Amsterdam for 24 hours. Trains will continue to operate from Paris to London, and full service is planned to resume on Wednesday (Dec. 23).

Will There Be A Third Lockdown In England?

On October 31, England went into a second lockdown, concluded on December 2 when with the introduction of a toughened three-tiered system, which has since seen the addition of a fourth tier, and will be reviewed every two weeks.

There are currently no plans for a third lockdown in England, but with the likes of Northern Ireland, Scotland, and Wales all preparing for some sort of lockdown after Boxing Day it’s looking more than likely. When asked whether another shutdown could be a possibility, Boris Johnson refused to rule it out. “Obviously we’re hoping very much that we’ll be able to avoid anything like that,” he told Sky News (via the Guardian), but the reality is that the rates of infection have increased very much in the last few weeks.”

Will There Be A Third Lockdown In England?

On October 31, England went into a second lockdown, concluded on December 2 when with the introduction of a toughened three-tiered system, which has since seen the addition of a fourth tier, and will be reviewed every two weeks.

There are currently no plans for a third lockdown in England, but with the likes of Northern Ireland, Scotland, and Wales all preparing for some sort of lockdown after Boxing Day it’s looking more than likely. When asked whether another shutdown could be a possibility, Boris Johnson refused to rule it out. “Obviously we’re hoping very much that we’ll be able to avoid anything like that,” he told Sky News (via the Guardian), but the reality is that the rates of infection have increased very much in the last few weeks.”

What About The Rest Of The UK?

Scotland, Wales, and Northern Ireland have been following their own set of restrictions and lockdowns.

Right now, Scotland is running on its own tiered system, which has five tiers instead of England’s three four. These range from level 0, which is classed as ‘nearly normal’ right up to level 4, which is considered a full lockdown. Currently, 11 areas in west and central Scotland are in level 4. These rules were lifted on Dec. 11, and these areas were moved down to level 3.

As of Dec. 21, Welsh residents are back under lockdown rules after the government pushed the planned shutdown for Dec. 28 forward following the discovery of the new COVID variant. While households will still be permitted to meet up on Christmas Day, they must follow strict guidance to stay at home where possible. “While we want to avoid further disruption to businesses and plans for Christmas,” First Minister Mark Drakeford told BBC News, “our overriding duty is to protect lives here in Wales.” Northern Ireland will also enter a similar lockdown to Wales from Dec. 28 for three weeks. There’s currently no word whether England will enter a similar lockdown after Christmas.

Will A Vaccine Be Ready By Christmas?

On Dec. 2, the UK became the first country to approve the Pfizer/BioNTech vaccine, followed closely by the vaccination programme which began on Dec. 7. Since the rollout started, over 137,000 people have been vaccinated which includes frontline health workers, care home staff, those aged over-80, and vulnerable patients. The vaccine developed by Pfizer and BioNTech reported to offer 90% protection against COVID-19 and the early data from the Moderna vaccine has shown it to offer 94% protection according to U.S. experts. Interim data has come back from the Oxford vaccine and researchers have said it could be 70% effective but if doses were changed that could rise to 90%

More like this
90 Epic Truth Or Drink Questions To Play 'Say It Or Shot It' With
By Bustle UK
Here’s Where The NHS Nurses’ Strike Currently Stands
By Sophie McEvoy
Here’s What Health Means To People In 2023
By Isabella Biedenharn
How Many Burpees Should You Do Per Day? Here’s What Fitness Trainers Say
By Carolyn Steber
Get The Very Best Of Bustle/UK
Sign up for Bustle UK's twice-weekly newsletter, featuring the latest must-watch TV, moving personal stories, and expert advice on the hottest viral buys.