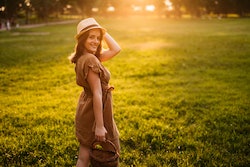 If you're into astrology, you've probably heard of the notion of being born on the "cusp," which usually refers to having a birthday that teeters on the edge of two sun signs' date ranges. But what does it mean if you're born on the cusp of two zodiac signs? Some people who were born around the first or last day of a zodiac sign's season claim they feel like a blend of both signs — but is that really possible?

Well, here's the final say when it comes to cusp signs in astrology: They don't exist. "Cusp signs" are a popular astrological myth. A planet can only be in one place in the zodiac at a time, meaning you can only have one sun sign — because the sun can't be in two places at once. Sorry to burst any cusp-claimers' bubbles! However, if you are born on a so-called cusp of two zodiac signs, there are definitely some things to keep in mind — as this placement could make things a little bit complicated.

Born On A "Cusp"? Check Your Birth Time

When people talk about their zodiac sign, they're usually referring to their sun sign in astrology. But the annual zodiac calendar isn't as cut and dry as a regular calendar (even though it may seem that way when you're reading your horoscope). While horoscopes usually provide clear-cut date ranges for each sign's birthday season, it's not always 100 percent accurate. That's because the sun moves into a new zodiac sign approximately every 30 days, and its movement doesn't align perfectly to the 24-hour clock, either. This means that sun signs don't just change when the clock strikes midnight on a certain date, like a calendar — the exact day and time that zodiac sign's season begins varies slightly from year to year.

For example, I was born in the morning on what's generally thought of as the last day of Libra season, but had I been born just about 12 hours later — in the evening of the very same date — I'd actually be a Scorpio (because the sun moved from Libra to Scorpio at 9:44 p.m. PT on the day I was born). This means that some people who share my exact birth date — same date, same year — are actually Scorpios and not Libras. Trippy, right? However, if a baby was born on my birthday in 2019, they'd be a Libra no matter what their birth time was — since the sun moved into Scorpio around 10 a.m. PT on October 23 last year.

If you more evidence to prove the importance of a birth time, you can also look to Lana Del Rey as an example. As a summer solstice baby born on the day the sun moved from Gemini to Cancer in 1985, Lana's true sun sign was the subject of speculation by both astrologers and LDR stans for years. For a while, she was believed to be a Gemini (based on a now-deleted Instagram comment posted from her account, pictured in the Tweet below). But in June 2019, Lana officially confirmed on Twitter what we've all been dying to know: She's a Cancer.

That said, if you're born on or close to the date of a sun sign change, you'll want to check your astrological birth chart based on your exact birth date and time to make sure you're really the zodiac sign you think you are — because I don't mean to shake the foundations of your entire horoscope-readin' career, but it might not be what you thought. This appears to be what happened to Lana Del Rey sometime between 2013 and 2019 (based on the Tweet above, anyway), but I also personally know several self-proclaimed "cusp babies" who only discovered their true sun sign deep into their twenties, after having someone read their birth chart.

But What If I Feel Like I Have Two Zodiac Signs?

Now you know that cusp signs aren't real, and you simply can't be half one sun sign and half another. But if you're born on the day before or after a sun sign change and feel strongly that you do have personality traits from both signs, there might be reason for it — and it's not because you're a "cusper." Because you have a whole astrological birth chart to explore, it's likely you have other significant points or planets in your neighboring zodiac sign, and that can add an influence into your personality. A professional astrologer can help you figure this out — or alternatively, you can look up your birth chart online, or simply check the exact times/dates for each sun season in your birth year.

Critical Degrees & What They Mean

Even though there are no such thing as "cusp signs," being born within an extremely close proximity to a sun sign change can be significant — although it has nothing to do with a cusp. What it does have to do with is the degree of the zodiac that the sun was at during your exact time of birth. In astrology, each zodiac sign has 30 degrees (0 through 29), and as the sun travels through the sign, it moves from degree to degree. If you're born within the very first or last day of a zodiac sign, your sun is likely at either 29 or 0 degrees of your sign. These two points are known as critical degrees in astrology and they can affect how your zodiac sign is expressed.

"The 29th and 0 degree are known to be sensitive degrees in astrology," astrologer Lisa Stardust tells Bustle. "0 degree of a cardinal sign (Aries, Cancer, Libra, Capricorn) marks the seasonal shift (equinox and solstice). It marks immediate change [and] action. You can be extra sensitive and intuitive if your Sun is in a cardinal sign at a critical degree." This degree is significant for the rest of the zodiac signs, too: "Any sign at 0 degrees increases the qualities and characteristics of the sign," Stardust says. "The closer to 0, the more you exemplify the sign." So if you're born within approximately the first 24-hour period after the sun moves into a new sign, you're more likely to purely embody the qualities of that sign in an unadulterated, unfiltered way (which, interestingly, is quite a contrast to the false notion that being born on a so-called cusp will give you traits from both signs!).

If you're born during the very last day of a sign's season, your sun is likely at 29 degrees. "The 29th degree, also known as the anaretic degree, sparks the need to take time in decision making, as it points to rampant indecisiveness," Stardust says. "There’s a rush here to move on to the next sign, which is why it’s important to hold back." Because the energy of the 29th degree is so close to tipping into the next sign, it can give people's personalities a sense of hastiness and anticipation — which can be high-energy and exciting, but may also require some tempering and self-discipline in order to make sense of. "If you are born between 29 and 0 [degrees], you may experience major difficulties in understanding yourself because you are always running forward and not standing still," explains Stardust. "There’s a spontaneity and impulsiveness that other degrees don’t feel — and sometimes a lack of self-control (depending on the sign)."

Being born on the "cusp" of two sun signs can be complicated — it can make it a little extra challenging to know your true sign, and also likely means you're born at a critical degree that can certainly influence your personality. But what it doesn't mean is that you have two zodiac signs — so let's put that myth to rest once and for all. Now, go triple-check your birth time like Lana Del Rey and get to reading your birth chart!