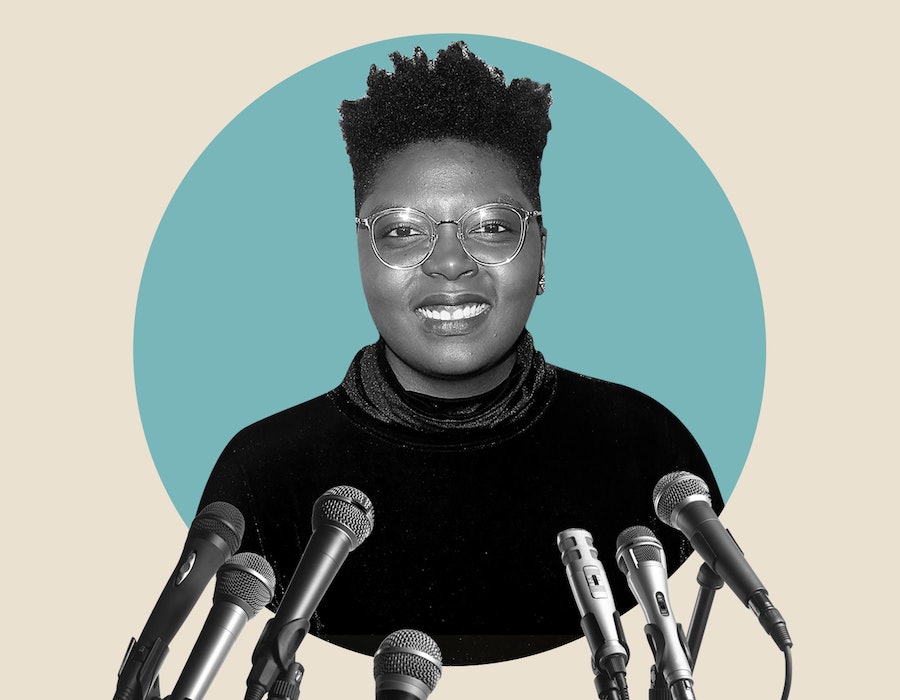 In Bustle's Quick Question, we ask women leaders all about advice — from the best guidance they've ever gotten, to what they're still figuring out. Here, filmmaker Dime Davis tells Bustle about her most defining moment, the greatest lesson her parents taught her, and her advice for aspiring Black female filmmakers.

Despite spending more time at home, Dime Davis, director of HBO's A Black Lady Sketch Show, says she's more inspired than ever before. "I've been able to silence everything a bit," says Davis, who recently made history when she became the first Black woman to receive an Emmy nomination for directing a variety series. "I've had moments in quarantine where I've been stir crazy, but for the most part, it's nice being alone," she says. "Quarantine allowed me a break that I don't know that I would've given myself, even though I needed it."

While she hasn't returned to sets yet due to the pandemic, the Houston native is known for remaining cool when she's behind the camera. "When I'm on set, I'm focused and try to bring good energy," Davis tells Bustle. An executive producer once told her she loved working with her because none of her "sh*t gets in the way." "I loved that because I spend a lot of time self-analyzing and pointing out the flaws that I don't like or no longer serve me, so that I can bring the lovely parts of myself to work, not necessarily the 'dark' parts," she says.

Davis, who started her production company, 3's A Crowd, with actor and producer Elle Lorraine this year, got her start in advertising before getting accepted into the American Film Institute's Directing Workshop for Women. Now she's penning scripts for Lionsgate, Hulu, and TBS and is currently working on turning her 2016 short film, Sugar, into a feature film.

Below, Davis shares the item that's off limits when she unwinds, the best career advice she's received, and how she learned to handle rejection.

How do you stay organized?

DD: There are times when I get intense about making to-do lists, but I’m more of a go-with-the-flow person. If I have to write, I go for a walk, grab coffee, meditate, and then get to work. I like to write in the afternoon or evening into the late night. During quarantine, I work Monday-Thursday, and then Friday-Sunday do whatever else I've got to do. Between quarantine and what’s happening politically, it has weighed a lot on me, so I don’t put too much pressure on myself.

How do you turn off your brain as a creative?

DD: I don't allow my computer in my bedroom anymore. Otherwise, I'll stay up watching YouTube. Every now and then, I'll take Instagram off my phone for however long until I feel like I need to get back on the app. Also, I've allowed myself to watch TV less, which is weird because I'm a filmmaker, but I do make time to watch I May Destroy You. I'm also reading Lovecraft Country. Me and a few friends started a book club during quarantine, but the show premiered before we finished reading the book, so now I'm trying not to have spoilers. It's a whole thing.

DD: Slow to hire, quick to fire. When you're hiring someone who's going to be a viable resource, you need to take your time and make the right choice. But then, if it's not working out, get rid of that person quickly. We're all trying to build toward something, so I don't want to waste time and energy on something that's not a right fit. We shouldn't be in environments that aren't suited for us if we have the privilege to make those choices.

I like to remind aspiring filmmakers that though it may not always look like it, there is enough room for all of us. Your voice matters, your unique stories need to be told.

And what's the worst advice?

DD: Early on in my career, there were boxes, so if you were a comedy writer, you could only do comedy. I always pushed against that idea because it felt false to me. Sketch comedy was not at the forefront of my career or anything I thought that I would be doing. But luckily, the industry started to shift and people who are multi-hyphenates are now accommodated and embraced.

How did you handle rejection early on in your career?

DD: Things changed significantly for me when I learned how to take that anger, frustration, or hurt I sometimes felt and morph it into determination. That's what I needed in order to keep on the path toward my goals.

DD: I like to remind aspiring filmmakers that though it may not always look like it, there is enough room for all of us. Your voice matters, your unique stories need to be told.

What's been one of the greatest lessons you've learned so far?

DD: After high school, I was accepted to Chapman University, a prestigious private school in California, but had to leave after an amazing first year because I couldn't afford the tuition. I went back to Houston and attended a nearby school. I was devastated, but I came up with a plan and worked harder than ever before. I love and value my parents, but they're workers not dreamers. During that time, I learned the value of work itself and what my parents taught me, which is that if you put your head to the ground and grind it out, you can achieve anything.