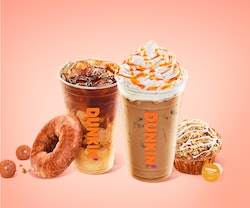 Praise the pumpkin spice gods: pumpkin spice season is nigh. Just how nigh? Well, Dunkin’ is bringing back its pumpkin spice products earlier than ever this year. Starting on Aug. 19 — as in, mere days from now — you’ll be able to get all your Dunkin’ fall favorites, as well as some new classics. Prepare thine pumpkin spice bodies.

As announced this week, Dunkin’ is bringing back all their autumnal delights from pumpkin-flavored coffee drinks to Apple Cider Donuts to Pumpkin Munchkins. Once again, you’ll be able to enjoy seasonal treats like Dunkin’s Pumpkin Muffin, which comes topped with white icing and streusel crumbs. Soon you can start your day with a Maple Sugar Bacon Breakfast Sandwich, which features maple sugar seasoned bacon, egg, and white cheddar cheese served on a warm croissant. Plus, Dunkin’ is introducing the most autumnal of autumnal treats. That’s right: Dunkin’ is releasing its own Pumpkin Spice Latte.

Dunkin’s new Signature Pumpkin Spice Latte combines espresso with pumpkin and vanilla and comes topped with whipped cream, a caramel drizzle, and cinnamon sugar topping. You’ll be able to get it hot or iced, the latter of which is ideal for the not-quite-fall weather. If you’ve yet to give in to the PSL craze, now is as good as time as ever.

Also new to Dunkin’s fall menu is the Chai Latte. The sweetened chai tea blend features cinnamon, cardamom, and nutmeg and your milk of choice. It’ll be a welcome balance to all the pumpkin spice you’re pumping into your body.

This year, Dunkin’ beat out Starbucks in the battle of Who Can Pumpkin Spice The Soonest? While the official date hasn’t been announced, rumor has it that Starbucks is bringing back its PSL on Aug. 28. In the meantime, you can enjoy Starbucks’ pumpkin spice products, which are already back on shelves. And, provided you’re not a PSL purist, you can dedicate your pumpkin spicing solely to Dunkin’ for at least the next week.

Dunkin’s pumpkin spice products are also expected to hit stores soon. Around late-August, you’ll be able to find the Dunkin’ Pumpkin Spice K-cups, as well as packaged pumpkin spice coffee at local grocery stores across the country. For the time being, you can join the rest of the internet in pumpkin spice anticipation.