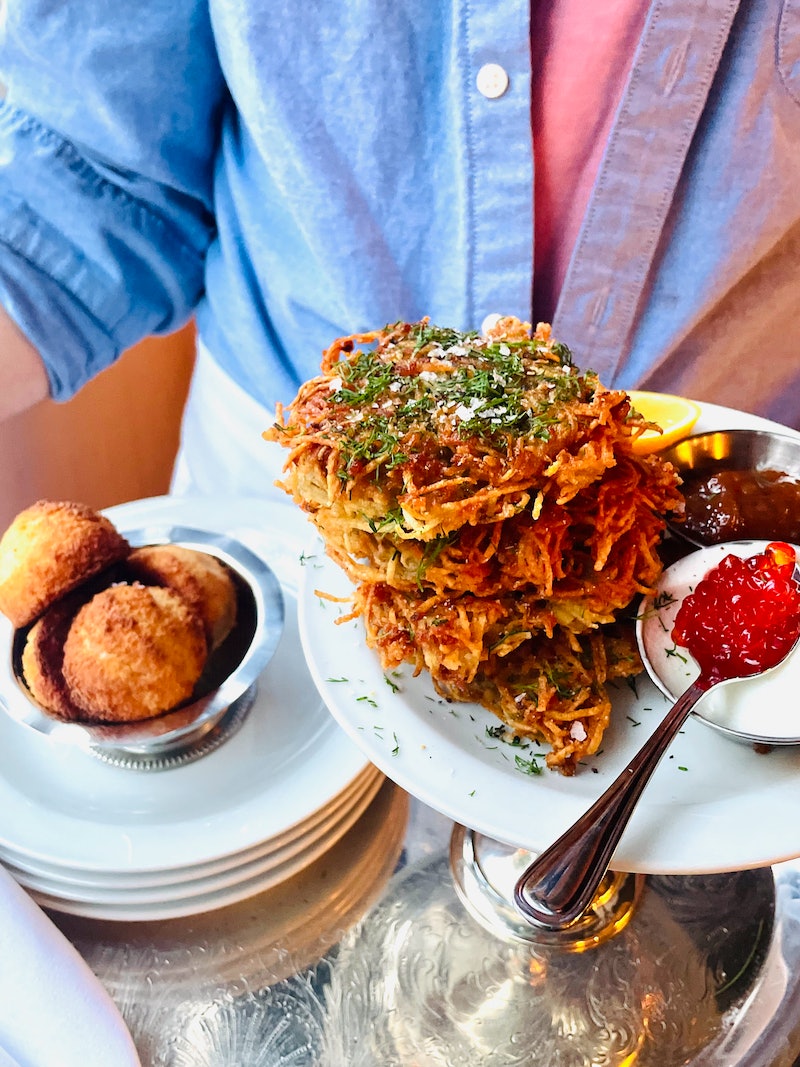 December is prime eating season. And for Jewish households across America, latkes are a Hanukkah staple. The Yiddish name for potato pancakes, latkes commemorate the miracle of Hanukkah, in which a day’s worth of oil at the Temple in Jerusalem is believed to have lasted for eight wondrous days and nights. And thus, Jewish people celebrate the holiday by eating foods deep fried in oil, like potato pancakes and jelly doughnuts, by light of the Hanukkiah, or Menorah, the eight-winged candelabra that symbolizes the temple’s lasting light.

Though every family has their own latke recipe — and many don’t even use a recipe, just riff on memory and tradition – those making latkes for the first time (or likely, first time in a year, at least) may want to work from a step by step tutorial. Stop reading the instructions on the back of the box of your frozen latkes and try your hand at homemade latkes this winter.

Chef Jeremy Salamon, owner of the trendy Jewish and Eastern European restaurant Agi’s Counter in Brooklyn, New York, originally learned to make latkes from his grandmother Arlene at a young age. “She always made them with matzo meal, and I was put to work to form the latkes,” Salamon recalls. Now, as a chef, he substitutes flour for matzo meal when he makes the holiday special at his restaurant. "I like a lighter latke, and feel matzo meal makes for a denser product," he says. Potato-wise, he's a fan of russets, and leaves the skin on before grating “for an added layer of texture.” Of course, any potatoes will do. Those avoiding gluten can swap potato starch for flour in the recipe. And those who don’t want to grate potatoes by hand or via a food processor can sub in frozen shredded potatoes.

To fry latkes, Salamon recommends using a cast iron skillet. “It heats up more evenly than any other pan,” he says. A good perforated spatula will come in handy for flipping and serving.

Cooking latkes is fairly simple – they’ll fry in hot oil in less than five minutes. Salamon prefers Canola oil. “It has a higher tolerance for heat than olive oil or anything else,” he says. It also has a neutral flavor, which means latkes can be served with sweet or savory toppings, such as applesauce (natural or sweetened is fine) or sour cream. At his restaurant, Salamon serves latkes with a horseradish sour cream sauce, smoked trout roe, and dill. At home, he tops his latkes with pickled white anchovies and dill. For an elevated presentation, garnish latkes with fresh herbs, a creamy element, and a salty or sweet element.

For many, frying may be the most intimidating part of making latkes. But a little planning goes a long way. While the oil heats, Salamon suggests creating an “exit strategy” for your finished latkes by setting a wire rack over a sheet pan. This helps the excess oil drain from the latkes and they stay crisp. If you’re making a double or triple batch for a party, preheat your oven to 200 degrees and slip latkes onto a sheet pan in the oven as they’re ready. Alternatively, set up a toppings station and let guests help themselves to hot latkes and dress them up as they’re ready. “No one likes a cold latke,” Salamon says.

Ready to fry up a batch? For four servings of latkes, you’ll need:

In a medium mixing bowl, combine the grated potato, onion, salt, egg, and flour. Mix well with your hands or a large spoon.

Heat the canola oil in a large cast iron skillet set over medium-high heat. You’ll know the oil is hot enough if you (carefully) let a drop of water fall in and it sizzles. If the oil starts to smoke, it’s too hot.

Using a tablespoon, scoop a mound of latke batter from the bowl and carefully drop it into the hot oil. Continue adding scoops of potato mix until the skillet is filled with small mounds.

With a perforated spatula, slightly flatten the latke in the oil. Fry for 2 minutes on either side, flipping with the spatula. Transfer the finished latke to the wire rack. Your latke should be crispy and golden brown.

Continue frying remaining batter. Immediately transfer to a platter and garnish with your toppings as you please.

More like this
Dunkin’s Valentine’s Day Lineup Includes A Drink That Tastes Like Dessert
By Alexis Morillo
12 Aphrodisiac Desserts To Spice Up Your Valentine’s Day
By Kaitlyn Wylde
15 Black-Owned Liquor & Wine Brands To Add To Your Bar Cart
By Alexis Morillo
23 Super Sweet Things To Write In A Valentine's Day Card
By Karen Belz and Lexi Inks
Get Even More From Bustle — Sign Up For The Newsletter
From hair trends to relationship advice, our daily newsletter has everything you need to sound like a person who’s on TikTok, even if you aren’t.