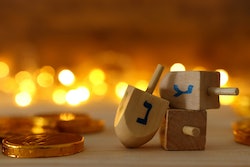 For those observing the Festival of Lights, this year Hanukkah starts on the evening of Thursday, Dec. 10 and ends on Friday, Dec. 18. This eight-day celebration is coming up soon and, like with many Jewish holidays, Hanukkah has a lot of traditions surrounding it. You may have heard about some of the more obvious ones — like the fact that the festivities last for eight days and nights, and that Jews light a special candelabra with nine branches called a menorah. But there's more to Hanukkah than lighting the menorah and getting eight days of presents (which, for the record, definitely doesn't happen in every Jewish household). So, with the power of the internet and my own Hebrew school education, I'm going to explain what Hanukkah traditions mean and what their significance is.

For those very unfamiliar with this Jewish holiday, Hanukkah basically commemorates the re-dedication of the Holy Temple in Jerusalem after the Jews reclaimed it from the Syrian-Greeks, according to Chabad.org. That's a very simplistic explanation, and I'll get into a little more of the story of Hanukkah as I go through some of these traditions. Here are five of the most well-known parts of this Jewish holiday, what they represent, and where they come from.

1. The Menorah or Hanukkiah

I sort of explained what it was above, but the menorah is kind of the most important part of this holiday, so it's worth going in-depth. Although "menorah" is sometimes used interchangeably with hanukkiah, they are different. A hanukkiah is a nine-branched candelabra used on Hanukkah. A menorah, however, is a candelabra with seven branches and is more of a symbolic object that isn't used specifically on Hanukkah — for instance, you'll see it in synagogues year-round. Now that I've spent all that time explaining the difference between a menorah and hanukkiah, I'll try to keep my explanation of its significance fairly brief. So here's the deal: After the Jews reclaimed the Holy Temple from the Syrian-Greeks, they wanted to light the menorah in the temple. The problem? Menorahs were lit with oil back then (no candles), and they only had enough oil to last for one night. So they lit it anyway, and miraculously, the oil burned for eight continuous days — and thus, the miracle of Hanukkah was born. Today, Jews light the menorah for eight nights to commemorate this miracle.

Latkes are potato pancakes that are traditionally eaten during Hanukkah. This explanation is simple: Latkes are fried in oil to remind us of the oil that lasted for eight days in the Hanukkah story. Jews may also eat doughnuts fried in oil (often of the jelly variety) for the same reason.

A dreidel is a spinning top with four sides, each side displaying a different Hebrew letter. The letters stand for a Hebrew saying that in English translates to "a great miracle happened there." Legend has it that during the time in which the story of Hanukkah took place (around 200 B.C.), Jews in Israel weren't allowed to practice their religion — but they continued to do so in secret. So when they would be secretly practicing Judaism and patrols would come by, they'd quickly put away their Torahs and pull out their dreidels, acting like they were just playing an innocent game and no funny business was going on. This actually happens in the Rugrats Chanukah special, and from what I remember, they got that part right.

Gelt, now known as chocolate coins, are often used as gambling chips with which to play dreidel — but they actually have a deeper meaning. According to Chabad.org, following the re-dedication of the Holy Temple, Jews used the original "gelt" (gold) as a way to reward children for Torah study. NPR reported that coins used to be minted for special occasions and were used as an end-of-the-year tip for itinerant workers. As people migrated and customs shifted, people shifted from giving real money as tips to giving chocolate money as gifts to their children. The chocolate gelt is basically a modern take on an old tradition. Honestly, I didn't know that — I really thought we just used it for dreidel. Even I'm learning something.

Ah, yes — the gifts. "You're so lucky you get eight days of presents when I just get one," my Christmas-observing friends used to say to me. First of all, trust me when I say I was not drowning in a mountain of presents for over a week. It would be, like, one per night at most — and I've seen the piles of boxes under many a Christmas tree, let me tell you. Second of all, giving gifts is really not a traditional part of Hanukkah — there is no biblical root to it. Some people believe the gift-giving evolved as a modern interpretation of rewarding children for learning Torah, as I mentioned above. Others, though, believe that gifting became a tradition because Hanukkah usually falls in the same month as Christmas so it became commercialized like Christmas did (especially in the United States). In other words, eight nights of presents is a tradition that's not actually a tradition. But I'm not complaining.

This article was originally published on Dec. 10, 2016