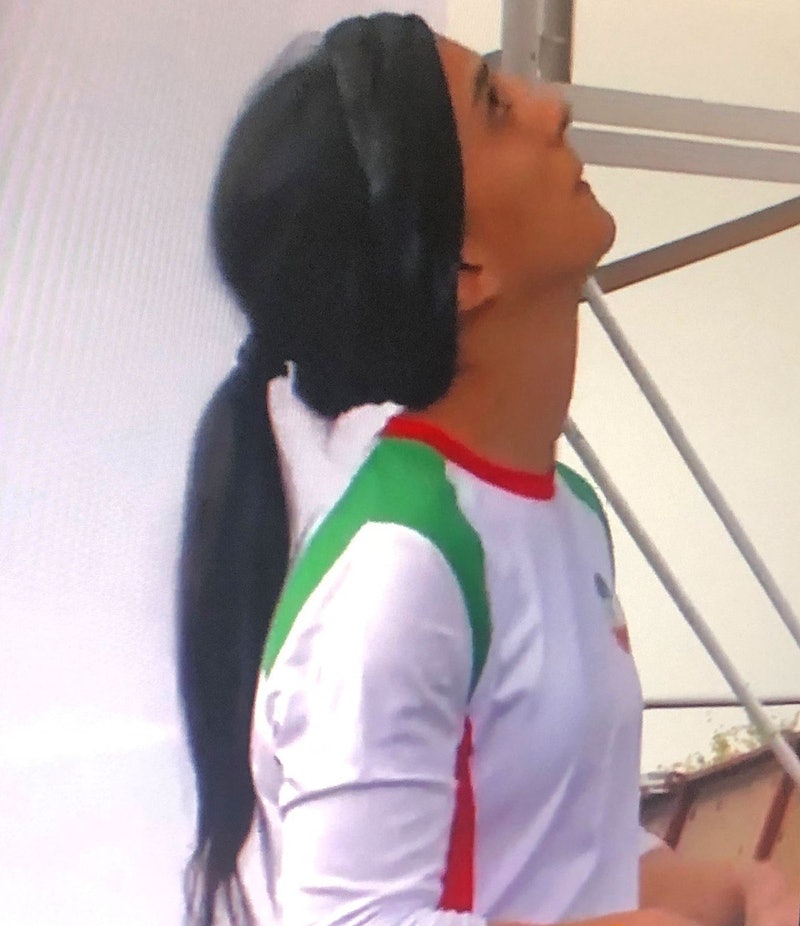 When Iranian climber Elnaz Rekabi was filmed competing in an international tournament in South Korea, Seoul, without a hijab, people paid attention. In light of the Iran protests over Mahsa Amini’s death, tensions continue to rise as many of the country’s women are pushing back against the restrictive laws and demanding change. Many of the protestors have reportedly faced harsh punishments from the government. As such, concerns grew over whether Rekabi, who placed fourth in the IFSC Climbing Asian Championships, may face retribution for competing sans hijab.

Rekabi’s friends told BBC’s Persian service that they had not been able to make contact with the athlete since she took part in the competition on Sunday, Oct. 16. And “well-informed sources” in contact with BBC Persian were quoted as saying that the athlete’s mobile phone and passport had been confiscated by officials ahead of her boarding a plane back to Iran. The Iranian embassy in Seoul denied these reports.

However, an update was posted to Elnaz Rekabi’s Instagram account on Oct. 18, reassuring fans and well-wishers that they needn’t worry, and stating that her hijab was removed unintentionally. The post apologised for "getting everybody worried.” Referring to Rekabi competing without a hijab, the statement read: “Due to bad timing, and the unanticipated call for me to climb the wall, my head covering inadvertently came off.” The post then said that Rezkabi was heading back to Iran "alongside the team based on the pre-arranged schedule.”

BBC Persian journalist Rana Rahimpour has said that the Instagram story itself has “created a lot of concerns” as it “looks like she [Rekabi] is under a lot of pressure.”

On Oct. 19, in the early hours of the morning, Rezkabi arrived home to Tehran, Iran, to cheers from well-wishers. The athlete, who was greeted by her family, spoke to the media gathered outside of the airport. Reiterating the message shared on her Instagram story, Rezkabi, whose hair was covered by a baseball cap, said of her appearance at the competition: "I was suddenly and unexpectedly called on to compete while I was at the women's locker room. I was busy wearing my shoes and fixing my equipment, and forgot to wear my hijab, which I should have worn."

The athlete admitted she had been "feeling stressed and tense" amid the reactions to the video, before saying: “Thank goodness, I've returned to Iran in good health and safe. And I apologise to the Iranian people for the confusion and concerns."

This all comes after 22-year-old Kurdish woman Mahsa Amini, died in Tehran, Iran, on Sept.13, after being detained by the country’s morality police for supposedly breaking the rules surrounding the hijab. Since the 1979 Islamic Revolution, women have been required to cover their hair and bodies with a hijab and loose-fitting clothing. Following Amini’s death, women in Iran, and across the globe, have been taking a stance against the restrictions, with many cutting their hair in solidarity.

More like this
Paul Rudd’s Secret To Eternal Youth Is Something You Can Try At Home
By Darshita Goyal
Here’s What TikTok's "Mascara” Trend Is *Really* About
By El Hunt
11 Super Bowl Instagram Captions To Use On Game Day — Even If You Don’t Like Sports
By Alexis Morillo
Eurovision Has Been Given A Whole New Look Ahead Of Its Liverpool Debut
By Bustle UK
Get The Very Best Of Bustle/UK
Sign up for Bustle UK's twice-weekly newsletter, featuring the latest must-watch TV, moving personal stories, and expert advice on the hottest viral buys.

This article was originally published on Oct. 18, 2022