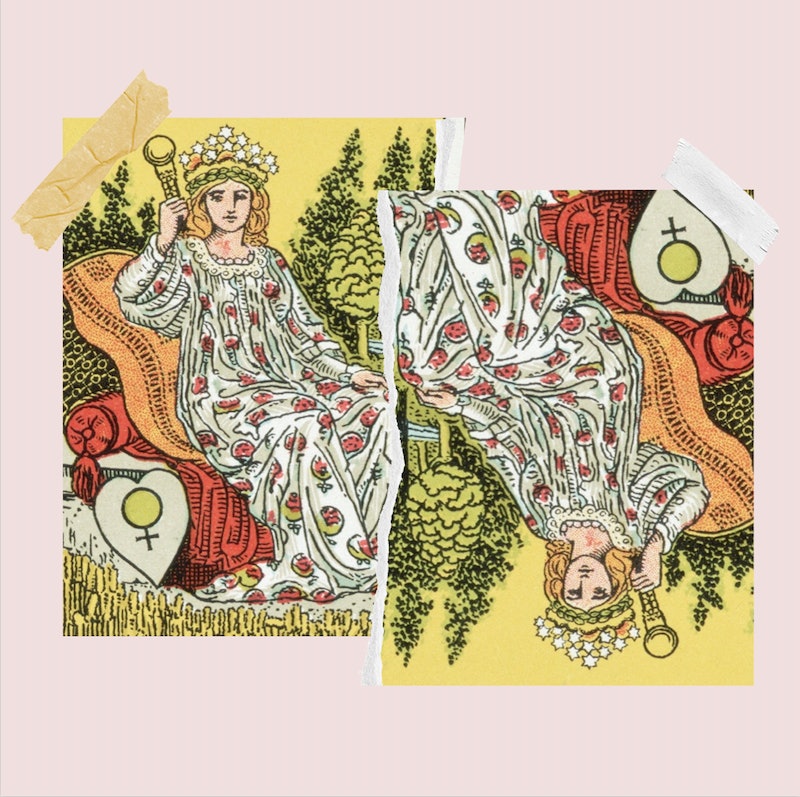 There’s no doubt about it: we’re witnessing a tarot takeover. The intuitive practice has become a cornerstone in Gen Z and millennial pop culture (I mean, have you been on TikTok lately?) — and its popularity is for good reason. Reading tarot can offer us clarity, comfort, and guidance on some of our most pressing questions about life, love, career, and more. If you’ve just picked up your first deck and pulled the Empress card, you probably have some questions.

For starters, you’ll want to get into the tarot basics before understanding the Empress card’s meaning. There are 78 different cards in a deck and each holds certain energies. The tarot deck is divided into two subsets: the minor and major arcana, and the Empress card is part of the major arcana. These cards symbolize different archetypes and important life lessons. If the Empress card has come up for you, it means that basically, you can expect some good tidings.

What Does The Empress Tarot Card Mean?

Tarot relies heavily on the practitioner's intuition. So while each card holds a different meaning, what spread (the arrangement of the cards you pull) the question you ask, and the way a card is pulled (whether the card was pulled upright or in reverse) matter during a tarot reading. Once you get the gist of the energies and symbolism of each card, you can plug it in the spread with the questions you have.

“The Empress is traditionally regarded to be a person or period of time bolstering abundance, creativity, sexuality, and passion,” Laura tells Bustle. “She represents a period when you can expect to see achievement, prosperity, being sought after for your wisdom, and having influence over others to motivate or manipulate.”

What Does The Empress Mean When It’s Upright?

The Empress card is generally a fortunate card representing femininity. “When pulled, an upright Empress represents a natural or educated leader that nourishes people and nature around them with tenderness and comforts. She signifies the embodiment of female qualities such as working well with children, being passionate and sensual, being a responsible parent, and being adept at creativity,” explains Laura. “It touches on female passion in all of its aspects: sexuality, fertility, motherhood.”

If the Empress card comes up for you, it doesn’t necessarily mean you’re on the way to starting a family. This card can work for all sorts of questions. For example, if you’ve asked a question about money and finances, it could represent the creation of money through a new stream of income. If it comes up during a question about career, it could represent your passion at work or a boost of creativity in the workplace. Overall, this card is a positive one, but it tells only one side of a story.

What Does The Empress Reversed Mean?

Remember when I said the way a card is pulled is important? The more you use your deck, the more it gets shuffled, and you’ll find yourself pulling cards upside down, or in reverse. When you pull a card in reverse, this can represent a few things.It can represent the shadow side of the card, or the unfavorable and adverse meaning, Usually, this can be the opposite of its upright meaning. The Empress pulled in reverse can also represent the original meaning, applied to your inner self, depending on the context of the question and your intuition.

“The Empress when in reverse symbolizes detachment, emotional distance, being overbearing or controlling. She may signify creative blocks or other blockages such as infertility, and being barren of passion, emotion, and consciousness,” explains Laura. Whether it represents its flip side of the card’s meaning, or its upright meaning but applied to your inner self, if the Empress card has appeared in reverse, it’s worth paying close attention.

Pulling the Empress card in reverse isn’t necessarily a bad thing, but rather, it reminds you to be mindful of themes of detachment that may be deliberately or subconsciously avoided. Tarot isn’t meant to judge you (although it can seem like it at times). Its messages are meant to sharpen your intuition and to help you dig deep within yourself.