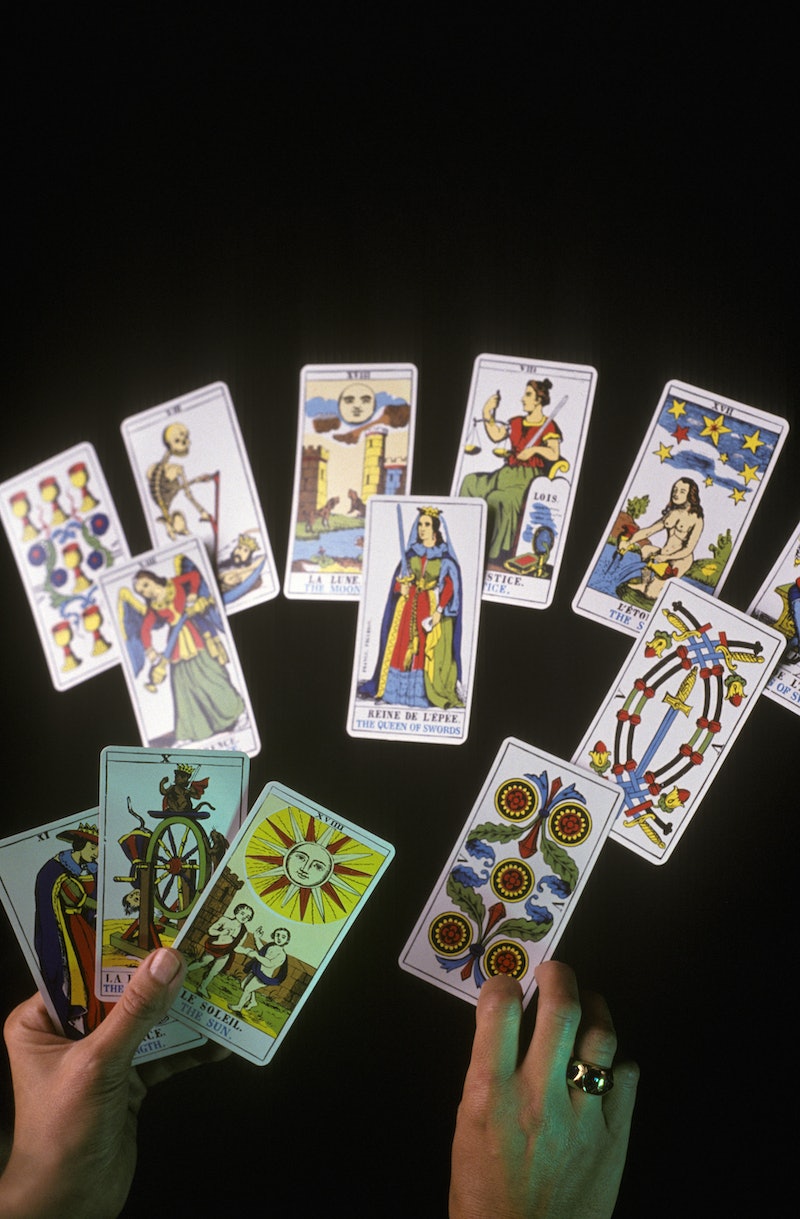 If you've dabbled in astrology long enough to know your sun, moon, and rising signs, then chances are you've also had an experience with reading tarot cards (or at least considered it). While these two practices may only seem similar in that they're both topics you can read about in the occult section of your local bookstore, these mystical arts are very much aligned thematically and symbolically. In fact, each tarot card corresponds to a different planet, sign, or elemental combination in astrology — and there's actually a tarot card for each zodiac sign.

Many practitioners combine tarot and astrology to deepen their practice and get more out of their tarot readings. "Each tarot card has an element, planet and/or zodiac sign associated with it, and learning about these can help tarot students get a grasp on astrology, and help astrologers understand the tarot," astrologer and tarot reader Annabel Gat tells Bustle. "One of the most exciting things to me about divination is the correspondences between the systems."

Tarot and astrology are similar in that both systems can be used to gain insight into yourself, your life, as well as your future. "While astrological divination is based on trackable phenomenon (the moving planets), tarot is random: cards are shuffled and drawn by chance," Gat says. "But both studies are beautiful tools for self-reflection." Tarot, like astrology, uses archetypes and symbolism to weave together a story that can offer us guidance — it's just that one practice uses cards while the other uses planets and zodiac signs.

How Are Astrology & Tarot Cards Related?

It may be helpful to know some basics. Tarot decks are made up of 78 cards, and 22 of those are known as the Major Arcana, which represent deeper and more overarching themes in our lives. The cards associated with each of the 12 signs of the zodiac are all Major Arcana cards. The remaining 56 cards are known as the Minor Arcana, and they're divided up into four suits that correspond with the four elements of the zodiac: wands (fire), pentacles (earth), swords (air), and cups (water).

Most of the well-known correspondences between tarot cards and astrology are based on a system created by the Hermetic Order of the Golden Dawn — an influential esoteric society formed in the late 19th century by a group of occultists. According to the Pagan Grimoire, this system applies Egyptian astrological concepts to the cards’ cosmic meanings and assigns different cards to different planets, elements, zodiac signs, and even specific dates. By understanding the astrological associations of each tarot card, we can add even deeper layers of meaning to our tarot spreads. (Some tarot decks developed by Golden Dawn members or students even include the corresponding astrological symbols on the cards themselves.)

Because there’s a tarot card for each zodiac sign, we can look to our sign’s tarot archetype as a means of self-reflection or for spiritual guidance. If you pull your sign’s card during a tarot reading, it’s a good time to reflect on the positive and negative qualities of your zodiac sign energy and how these traits might be influencing the situation in question. For example, if you’re a Scorpio, and pull the Death tarot card during a reading, you might consider thinking about themes of transformation or rebirth. Even if you don’t apply the knowledge in a reading, knowing the tarot card that represents your zodiac sign can help you channel the energy of both tarot and astrology — and give you a little bit of mystical insight into yourself, too.

The Emperor corresponds with cardinal fire sign Aries. This card is aligned with a take-charge energy of leadership — emperors are rulers with great power, after all. It also denotes impatience, as the Emperor wants to take action on things immediately. This sounds a lot like Aries, the zodiac's fearless leader, known for their impulsive personalities. And just like the Emperor, Aries are very proactive, given that they're cardinal signs.

The Hierophant corresponds with fixed earth sign Taurus. This card represents spiritual tradition, wisdom, and morality. It likes to stick to the tried-and-true methods of doing things instead of straying from the beaten path. Similarly, dependable Taurus is all about going slow and steady. This sign is known for being stubborn, so its energy aligns well with the traditional vibes of the Hierophant.

The Lovers correspond with the mutable air sign Gemini. This card is all about duality, partnership, and making choices. And in a similar fashion to the two lovers, Gemini is represented by the symbol of the twins. Gemini energy easily embodies two opposing ends of a spectrum at once, so duality is its thing. Because the Lovers card typically represents a choice, quick-thinking Gemini is a great match, as it loves to aggregate information to make an informed decision.

The Chariot corresponds with cardinal water sign Cancer. This card is about how we protect ourselves. It's how we take the reins of our situations by setting boundaries and having healthy defenses up to shield us from anything we don't want in our lives/energy bubbles. Cancer is one of the most protective signs of the zodiac, so the protective armor of the Chariot aligns perfectly with its nurturing vibe, and desire to provide safety and comfort.

Strength corresponds with fixed fire sign Leo. This card is all about control and independence, but it also denotes a balanced sense of power — the Strength card radiates just as much compassion as it does control. Similarly, Leo's regal energy is known for wanting to be the center of attention, but its just as generous as it is spotlight seeking. This zodiac royal leads with warmth, passion, and heart, which aligns it beautifully with the Strength card's themes.

The Hermit corresponds with mutable earth sign Virgo. This card is about connecting to inner wisdom, processing things internally, and quietly contemplating information so we can move forward with a deeper understanding. Similarly, Virgo is a sign that wants to thoroughly think things through and do things right. Its analytical and detail-oriented energy wants to improve the conditions of the world around it — and sometimes, retreating Hermit-style is the best way to make those plans.

Justice corresponds with cardinal air sign Libra. This card is another that's fairly self-explanatory — it's all about doing what's right, finding balance, and weighing the pros and cons to ensure a just choice is made. Libra (which is represented by the symbol of the scales) is constantly seeking harmony and fairness, so justice is a huge theme. Like the Justice card denotes, having a balanced give and take is important.

Death corresponds with fixed water sign Scorpio. Just as the Death card is often feared in the tarot, so too are Scorpios in astrology — but these archetypes don't necessarily represent literal death or danger. It's more about a need for intense and potent change. This card refers to deep transformation and new beginnings that can only come with the closure of another chapter. Similarly, Scorpio is the sign of transformation and renewal, and it's unafraid to seek the truth beneath the surface that facilitates change.

Temperance corresponds with mutable fire sign Sagittarius. This card represents moderation, mediation, and the quest for spiritual enlightenment. Similarly, Sagittarius is the truth-seeking sign of freedom and honesty. Sagittarius may be a passionate fire sign, but they're deeply philosophical and spiritual, and are always on a quest for deeper meaning — so their energy aligns perfectly with Temperance's meaningful vibe.

The Devil corresponds with cardinal earth sign Capricorn. Don't worry, the Devil isn't about evil — it's actually about the material world, cost, and consumption. It asks us to evaluate what we're signing away to others, energetically or financially. Like the Devil card, Capricorn's focus is very much on material wealth and success, which is why it's known as one of the most hardworking signs of the zodiac. Of course, it's easy to get lost in materialism, and the Devil asks us to be conscious of that kind of indulgence.

The Star corresponds with fixed air sign Aquarius. This card is all about rebirth, rejuvenation, and the ability to have hope, faith, and wishes. Similarly, Aquarius is the zodiac's forward-thinking visionary. Just as the Star is associated with dreaming up a better future, Aquarius is always using innovation to invent new ideas that'll benefit the collective wellness and carry us into a fresh era. Both Aquarius and the Star remind us of the unimaginable possibilities that lie ahead of us.

The Moon corresponds with mutable water sign Pisces. Just like Pisces, this card is all about getting lost in the depth of our feelings and swimming through the unknown. It's associated with shadow work, or the exploration of all the stuff that's hidden in the shadows of our unconscious. Similarly, Pisces is a transcendental sign that seeks to explore deepest parts of the soul that are hidden from view.