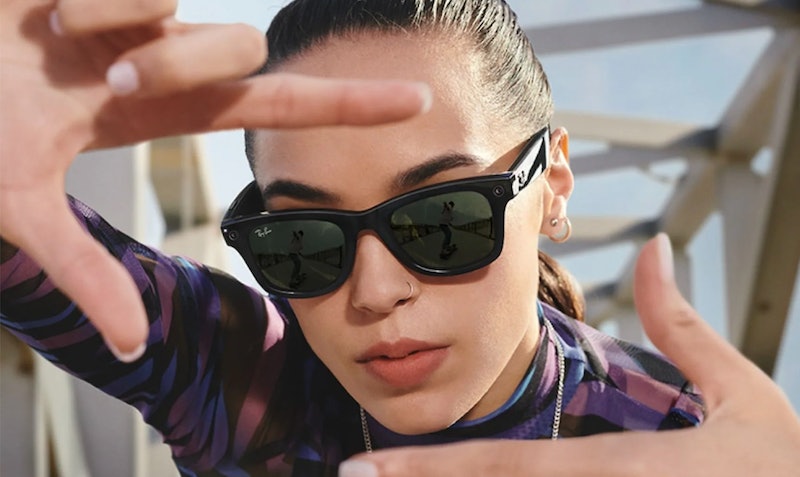 As a glasses-wearer, the only thing I wish my lenses were better at is staying clean. Facebook, however, seems to believe that the experience of glasses-wearing would be improved if your specs could take calls, play music, and, uh, take photos and videos of your surroundings.

On Thursday, the social media company launched smart glasses, called Ray-Ban Stories, which can do exactly that. Starting at $299, the glasses will be available for purchase anywhere you can buy regular Ray-Bans, per the Verge.

You can turn on the glasses’ smart capabilities by saying “Hey, Facebook,” or by using buttons and touchpads on the frame. The 5-megapixel cameras let you take up to 35 30-second videos, and photos or videos you take through the glasses are sent via Bluetooth to an app called Facebook View. From the app, which is free to download for iOS and Android, you can edit your media and share to other platforms. (Like Instagram, which is owned by Facebook!) You need a Facebook account to use the glasses and log into the View app, but the app won’t post automatically to your account.

But wait! Didn’t Google and Snapchat try this exact gimmick a few years back, only to get laughed out of town? Indeed they did! Google Glass, launched to the public in 2014 and sold for a casual $1,500, ended up getting banned from bars, and wearers earned the moniker “Glass-holes.” Snapchat Spectacles, which launched in 2016, cost only $130, but similarly failed to take off in a meaningful way.

Besides avoiding an alliterative name, Facebook’s smart glasses differ from their predecessors in the types of functions they can carry out, as well as in style. The shades come in classic Ray-Ban frames, only with mini lenses on their sides. (Next to the lenses is a white LED indicator light that will turn on when the camera is recording, ostensibly to give passersby a heads up that they’re in the shot.) You can even get your Ray-Ban Stories outfitted with your prescription, should you want to wear them in lieu of actual glasses.

Given Facebook’s thorny history with privacy, however, the idea of wearing the devices casually is giving some people pause. BuzzFeed’s Katie Notopoulos found that though it’s a violation of the terms of service, it’s not difficult to simply tape over the glasses’ indicator light, allowing the wearer to record anyone around them without notifying them. Even without that measure, people could easily mistake the white light for Ray-Bans’ characteristic silver frame decal. Per The New York Times, the View app prompts users to “respect others around you” and ask themselves whether it “feels appropriate” to capture images or video, but frankly, I don’t expect much in the way of “respect” from people in 2021.

For those who were holding out on smart glasses until Facebook made them, you finally have the opportunity you’ve been waiting for. For everyone else, well, it’s Mark Zuckerberg’s world, baby — we’re just living in it.