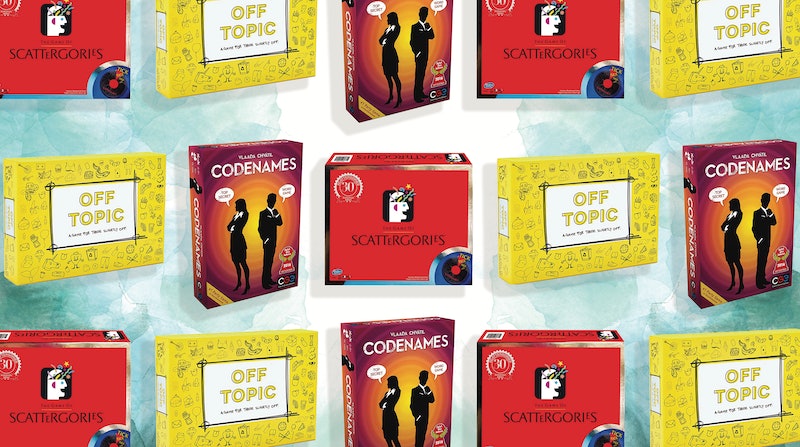 Taboo is a classic party game that involves screaming, shouting, and wordplay, sort of like charades meets Scrabble. It’s a unique pastime that’s difficult to replace — but there plenty of similar games out there that you’re sure to love just as much. If you’re looking for games like Taboo, you’ve come to the right place. The best options are word-based with performance elements and team-playing formats. When putting together this list, I looked for a few key qualities:

Below, you’ll find five games like Taboo that are fun to play and rated highly on Amazon.

1. A Fast-Paced Card Game Where You Have 5 Seconds To Shout Out Your Answers

Number of players: 3 or more

What’s great about it: With more than 8,400 reviews on Amazon, this popular card game is fast-paced like Taboo — players only have five seconds to name things that fit the topic. The pressure is added with a unique timer that features marbles racing down a plastic spiral tower. The silly word-based game has a party feel where everyone yells out impromptu answers, often saying goofy or funny things that will keep your group laughing.

One reviewer wrote: “One of the most entertaining games we own. Great for all ages and different every time we play. Definitely on par with taboo.”

2. This Fun Spy Game Where You Use One-Word Clues To Uncover Secret Agents

What’s great about it: This word-based game is another popular option on Amazon with a unique spy twist. The goal is to use word puzzles to reveal the identities of secret agents that are given to you by a spymaster. Like Taboo, this game is rooted in words that you play with cards in teams, though the pace is a little slower. The well-liked party game, which boasts a whopping 15,000-plus reviews on Amazon, can be played in 15-minute rounds.

One reviewer wrote: "A fun party game that really is simple and quick to get started. I think one of its strengths is the fact you don't really need even number teams as it's just team guessing [...] It's almost like Taboo, which IMO is still the ultimate classic party game. For the price, this is a definite must have in your party board game collection.”

3. This Classic Party Game Where You List Words That Begin With The Same Letter

What’s great about it: Another classic party game, this word-based card game is like Taboo except that instead of naming a word that players are describing out loud, you write down a list of words that begin with that same letter. It’s fast-paced like Taboo, and it makes a great option for parties. It doesn’t have any performance elements but the tempo and the vibe feel similar.

One reviewer wrote: “Bought this game for a family reunion and we had a BLAST playing! ... Loved the ticking timer because it makes everyone stress out just a bit to try to write their lists as fast as possible. Great that so many people could play at once with the six folders and pads. We were also very happy that the lists of words didn't have any off color ones (so, yes, it was safe to play with Nana around!) Scattergories is a such a fun ‘oldie but goodie.’”

What’s great about it: Another cult favorite with nearly 10,000 five-star reviews on Amazon, this fun card game is perfect small and large groups. The idea is to decode incoherent gibberish into recognizable phrases. This fast-paced game features a timer that keeps the pressure on and requires teams to work together to decode the answers. Just beware that some of the cards are NSFW so use discretion about who you invite to play.

One reviewer wrote: “Played this at a game night with friends and loved it enough to buy it for myself! As a bystander it is so funny to hear the other person trying to mouth the words because you hear them saying it but they can't. “

5. This Funny Game Where You Write Down Same-Letter Words And Defend Your Answers

What’s great about it: This group card game for adults is similar to Scattergories but with a twist. Instead of simply writing down words that begin with the same letter, you get points for popular answers. Like Taboo, the fast-paced card game has an unmistakable party feel that involves dice and an hourglass timer. Similarly the previous option, this game has some cards with NSFW themes, so it’s best for adult groups.

One reviewer wrote: "The game is pretty simple, and has a cards against humanity or taboo feel to it. My get together usually include board games, such as CAH, Taboo, Exploding Kittens, Privacy, Rick and Marty, etc. This game will make a good addition to our collection for rotation. Fun game.”

More like this
40 Smarter Ways To Keep Your Home Clean & Organized With Almost No Effort
By Claire Epting
According To Designers, These Cheap Home Updates Make The Biggest Impact
By Dena Ogden
The 5 Best Laptop Power Banks
By Vanessa Spilios
40 Clever Hacks That Fix The Cheap-Looking Eyesores Around Your Home
By Nikol Slatinska
Get Even More From Bustle — Sign Up For The Newsletter