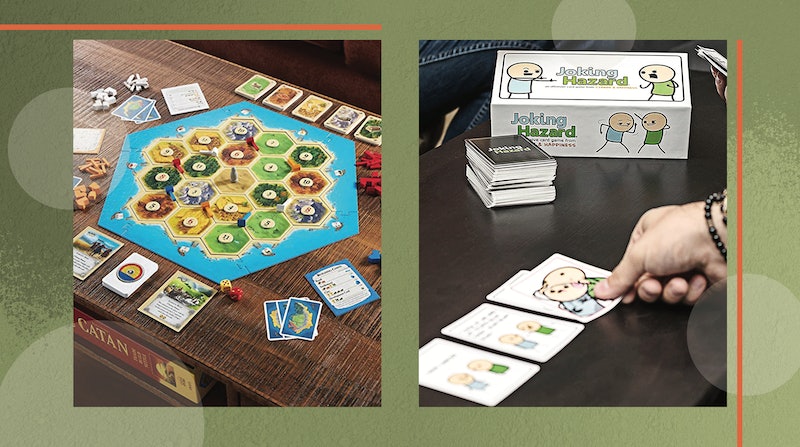 Many adults have come a long way from Candyland and The Game of Life. Now, there are tons of super clever board games that are actually fun to play over the age of six. And the most popular board games for adults offer the right amount of complexity or more adult themes to make sense for a grown-up game night.

Now, just because these games are aimed at adults, doesn't mean they are all outrageously NSFW. You’ll find crime-themed or horror board games on the list that might be a bit much for children, as well as board games like Catan that are just a little more complicated or over-the-top than your average family fare.

On the other end of the spectrum, you’ll find easy-to-play adult party games, which range from mildly suggestive to hilariously unfit for a family setting. These games tend to require almost no setup, utilize rules that make sense in under five minutes, and have room for large groups of players. Whether you want to bust out a classically cheeky game like Cards Against Humanity or learn some new facts about your friends with the revealing The Voting Game, there's something that'll entertain everyone.

Just because you're not a kid anymore doesn't mean you have to leave board games behind. With these amazing board and card games for adults, you'll want to find any excuse to play.

More like this
The 3 Best Universal Remotes For Fire Stick
By Lauren Moison
The 5 Best Smart Speakers For Spotify
By Claire Epting
If You Have No Idea What To Give, Check Out These 75 Wildly Popular Gifts Under $25 On Amazon
By Olivia Bowman
The 5 Best Pillows For Acid Reflux, According To A Sleep Expert
By Maria Cassano
Get Even More From Bustle — Sign Up For The Newsletter

This article was originally published on Sep. 12, 2017