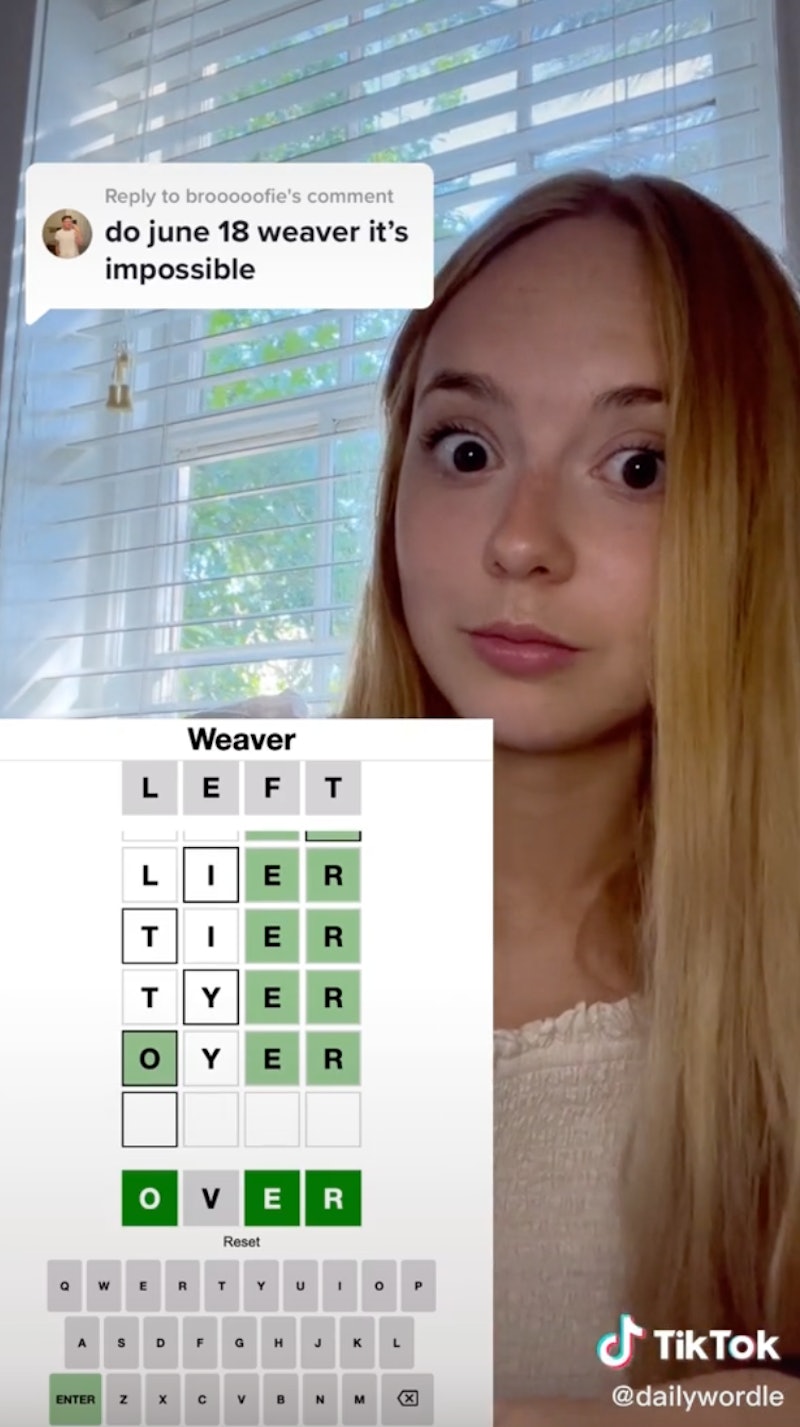 If 2022 has brought with it an obsession with five-letter words, you might be in the market for more games like Worlde — because sadly, you can’t Wordle all day. Whether The New York Times’ acquisition has you preparing for a potential post-paywall world without Wordle, or you’ve just already played today’s puzzle, you might be searching for some similar word games to put your diction buzz to good use.

While Wordle is unique in the fact that everyone has the same word of the day and only gets six tries to guess it, there are many apps and URL-hosted word games to play after Wordle that are similarly fun and intellectually stimulating. What’s more, many games like Wordle allow you to play as much as you want, have various levels and accomplishments to aim for, and let you to play with friends. Add some new word games to your anti-boredom arsenal so you can play a quick round while you wait for the train, or opt to play in lieu of a mindless social media scroll.

From meme-worthy Wordle spin-offs like the Swiftie-themed Taylordle and food-themed Phoodle, to classic brain teasers like NYT’s Spelling Bee or a Lewis Carroll-inspired word ladder, these brain busters will keep you guessing long after you’ve played your Wordle of the day.

Here are 19 games to play while you wait for Wordle to refresh.

If you’re a subscriber to The New York Times, you have free access to Spelling Bee, a word game that looks incredibly simple, but is actually pretty difficult. In Spelling Bee, you’re given a “hive” of seven letters to make words from, all of which must use the center letter. There’s at least one word a day that uses all seven letters, and you rack up points to reach the “Genius,” or winning level. If you guess all the words for that day, you win “Queen Bee.” Like Wordle, Spelling Bee refreshes just once a day, but unlike Wordle, you have unlimited guesses to make as many words as possible.

With Spell Tower, players find words in the tiles to clear piling columns and avoid reaching the ceiling, Tetris-style. Players are rewarded for finding long words with bigger clearings. You can share your score on social media by tapping the Share icon when you’re done, if bragging rights is half the joy of playing for you. Spell Tower is free in the App Store and Google Play.

If you like to be bullied by your games, try Absurdle, an “adversarial” version of Wordle. The game’s designer made it so that program actively avoids giving you hints about the correct word and even changes what the secret word is as you’re playing. The good thing about the browser-based game, however, is that you get unlimited guesses, which means more planing time.

Word Master, a browser-based game, has a very similar vibe to Wordle. You have six guesses to land on the correct word. After each guess, correct letters will turn green if they’re in the correct spot; yellow if they’re in the word, but not that spot; or gray to indicate it’s not in the word. The only difference between Word Master and Wordle is that you can keep playing with multiple puzzles in one day.

If you like your word games with heavy competition, you’ll love Letter Press, an unlimited game you can play with friends or random opponents on the internet. Unscramble tiles to spell words, get bonus points for extra long words, and chat with players in real time. Available for free in the App Store and Google Play.

Hello Wordl operates the same way as OG Wordle. The only difference is that you can change the amount of letters that are in the words (up to 11 letters), and you can tap Random in the upper left corner to get more words in one day. This is a great place to practice your word recall so that you’re in fighting shape for your official daily Wordle.

Call it Wordle (Taylor’s Version). From the weekly Taylor Swift-focused podcast Holy Swift, Taylordle operates almost identically to Wordle: Five letters, six guesses. Each puzzle features a different word from Taylor fandom — whether it’s “SWIFT” or “SCARF.” Swifties should know “All Too Well” how to fill in the “Blank Space” on these puzzles after spending decades deciphering Blondie’s cryptic album announcements.

Created by Lucio Villa, Palabra is another Wordle-alike centered around beloved reggaeton artist Bad Bunny. Though it’s built almost identical to Wordle, Palabra uses six-letter words that are all lyrics from Bad Bunny songs. With each puzzle, a link is provided to the song on Spotify, so you can groove along as you guess.

Your years of becoming fluent in Elvish can finally be put to good use with Lordle of the Rings. Based on the series by J.R.R. Tolkien, this Wordle clone uses five-letter words from the series. (Think: “Frodo,” “Bilbo,” “Rings.”)

Climate change might not be the most lighthearted prompt for a word puzzle, but this Wordle spin-off called A Greener Worldle, created by the International Institute for Environment & Development, is a great way to brush up on environmental terminology.

This game’s not just a typo of the original Wordle — Worldle is a guessing game for geography nuts. You start off with the outline of the country that’s the answer to the puzzle (though you can turn that off for an extra challenge). Every time you guess, you’ll see how far away your answer is from the actual solution — in kilometers and as a percent — and in what geographical direction the final country is.

Can’t get enough of the daily Wordle? Try quadrupling it. Quordle gives you four different words to guess, which you solve simultaneously. (Scroll down to see the last two quadrants.) You have nine guesses to solve all four words, and the keyboard will give you hints as to which letters appear in each quadrant.

If four words is two too many, you can play Dordle, which is just a double version of Wordle. (Or a half version of Quordle, which was inspired by Dordle.)

There is, indeed, a way to play unlimited amounts of Wordle, thanks to Wordle Unlimited. The game works exactly the same as the original, only you can keep playing after you solve the puzzle. Get this game its own browser tab, stat.

Test your Star Wars knowledge with this Wordle spinoff, which uses vocab pulled from the fan-favorite sci-fi series.

If the daily Wordle is just a bit too tame for your tastes, try Lewdle, a version of Wordle that only uses, ahem, saucy vocab. To give you a hint, those among us with the sense of humor of a teenage boy will have a built-in advantage at the NSFW word game — assuming you can stifle your giggles enough to get your guesses in.

Hungry for more Wordle? This version of the OG game has you guess food-related words. When you get the gustatory vocab for the day, you’ll be served a delicious factoid or culinary tip related to that day’s word, and the puzzle will also deliver a surprise weekly recipe. The homage to Wordle was created by cookbook author Julie Loria, who also curates the weekly recipes you’ll see in the game. Need more convincing to try it? Rave reviews come from none other than Martha Stewart herself.

Weaver takes the now-iconic Wordle format and applies it to a daily word ladder. The object of the game, invented in 1877 by Alice in Wonderland author Lewis Carroll, is to turn one word into another, editing only one letter at a time. For example, to change EAST to WEST, you’d change EAST to VAST, then to VEST, then to WEST. Like in Wordle, when you have a new letter correct, it’ll change to green in the grid. Unlike in Wordle, you have as many tries as you like to get to the end word, and can backtrack on your guesses in order to create a more efficient chain. (Your stats will reflect what the “optimal” number of guesses to get from one end to the other should be.) The game has developed a devoted following on TikTok, where videos with the hashtag #weaver have over 89 million views.