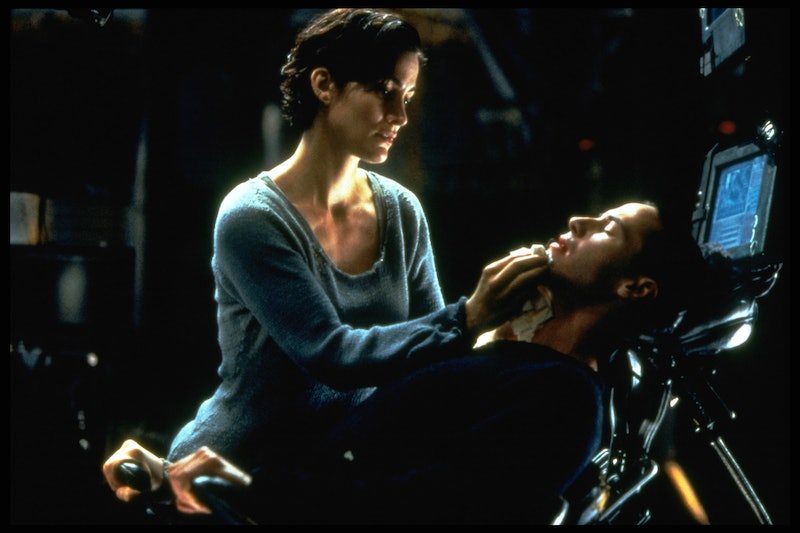 A lush hillside is dappled with sheep, but they've been frozen in place for an hour. A bird is crossing the skyline, but its wings are turned down. These are the kinds of videos you'll find on #GlitchTok — a creepy new corner of TikTok where users share "proof" that we're living in a glitching, Matrix-like simulation. The inexplicable eeriness of these videos is amplified by sci-fi soundtracks and comments sections ablaze with enthusiastic believers. If you were a fan of Randonautica TikTok videos, GlitchTok will scratch a similar itch.

For those who are new to this particular conspiracy theory, the idea comes from "brain in a vat" scenario you might remember from Philosophy 101. It's essentially the plot of The Matrix: that human consciousness is being manipulated by an outside force that's making people believe they live with free will by simulating "normal" life experiences, despite the fact that actually, their brains are hooked up to virtual reality machines, and everything they see is fake. The thought experiment asks people to consider whether perception or reality is a more meaningful part of existence. The conspiracy theory suggests that weird occurrences — missing left shoes, floating birds — are proof that the simulation exists, and it's broken. Since the pandemic began, the theory — that we're living in a glitching simulation — has been thriving on TikTok.

"Quarantine gave people time to reflect and notice these little things that they might not pay attention to in their everyday lives," GlitchTok-er Julia Kong tells Bustle. "GlitckTok is trending because people are starting to be open to the possibility that reality might not be what it seems — whether or not we live in a simulation, it's a fun 'what if' to consider," she adds.

Theoretical physicist Laura Sberna, a Ph.D. candidate at Perimeter Institute for Theoretical Physics in Ontario, Canada, feels pretty sure we're not in a simulation, for the record. "I would be surprised if the creators of such a complex simulation (involving everything we observe on Earth and beyond) would be so sloppy with missing forks and spoons," she tells Bustle. Instead, Sberna is more inclined to believe there's a "simpler explanation" for the glitches going viral on TikTok.

On July 14, Kong posted a storytime video explaining that her kitchen utensils have been going missing, one by one, despite always putting them away properly. Since posting, she's received over 14,000 comments on the video, featuring other lost and found kitchenware mysteries. Collectively, Kong and the commenters attribute this odd occurrence to a glitch in the Matrix. "I'm down to one fork," one comment reads. "I just found a seventh cup, even though I only bought a set of six," another one says.

Kong acknowledges that, of course, these could just be coincidences, but the idea that there's others like her experiencing these "glitches" is a relief. "If life truly is a simulation, then thank goodness! Why worry? Why stress? I say, just play the game, see where it takes you, and have fun!" In GlitchTok, if there isn't an obvious explanation, it's a glitch.

Rory Davis had a somewhat more troubling glitch experience. On July 23, Davis' mother told him to wake up to see a field of unmoving sheep that she'd been watching for an hour. He later uploaded an eerie video of the congregation. Over a million plays later, commenters are still trying to make sense of it. "It was like the scene in The Matrix where Morpheus is explaining to Neo about the matrix and time freezes," Davis tells Bustle. "As someone who firmly believes in science and conclusive evidence I’m actually quite open to the idea of a potential simulation," he tells Bustle. But Davis is still looking for a more logical explanation to make sense of what he experienced.

Quantum physicist Gabriela Barreto Lemos has that logical explanation. "In science we use the Occam's razor principle, whereby we look for the simplest explanation which can be used for the widest variety of phenomena. This Matrix glitch conspiracy theory is rather convoluted." Instead, Lemos and Sberna attribute the sheep's behavior to more logical explanations — like the weather, or a circumstance out-of-frame.

But just because physicists aren't lining up to validate this trend doesn't mean you should stop yourself from tumbling down the glitching rabbit hole, if it interests you. There are thousands of videos to lose yourself in, and comment sections to theorize in. Search for #glitch, #conspiracytheories, #matrix, #simulation, and explore from there — if you want to believe.

More like this
Behind The Hilarity Of The "POV: You Walk Into My Room" TikTok Trend
By Lexi Inks
On TikTok, Tinned Fish Date Night Is The Latest Viral Food Obsession
By Emma Carey
TikTok's Butter Board Might Be The New Cheese Plate
By Emma Carey
Here's How To Get Your iPhone To Update Automatically Forever
By Emma Carey
Get Even More From Bustle — Sign Up For The Newsletter