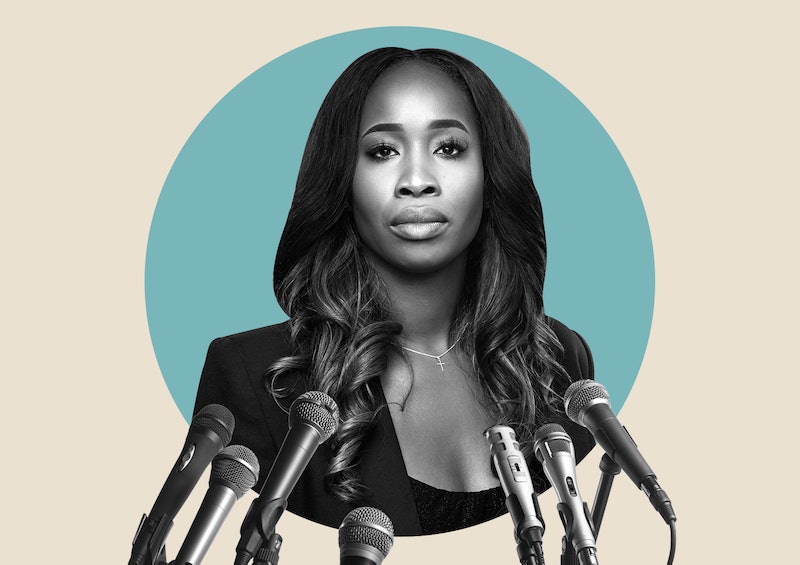 In Bustle's Quick Question, we ask leaders all about advice. Here, Google's Head of Product Inclusion Annie Jean-Baptiste tells Bustle about her new book on product inclusion, recognizing biases, and speaking in meetings.

Ask your Google Assistant if Black lives matter and you'll now hear: "Black lives matter. Black people deserve the same freedoms afforded to everyone in this country, and recognizing the injustice they face is the first step towards fixing it."

That update, released on June 5, is thanks to Google's Head of Product Inclusion Annie Jean-Baptiste, whose job is to make everyone feel validated when they use products and software, whether that's emoji or facial recognition. Jean-Baptiste, who's been at Google for 10 years, began leading product inclusion three years ago after it had been the focus of her 20% Project, an initiative that lets Google employees spend 20% of their time on a project outside their core role.

"The biggest challenge was that there wasn't really a blueprint," says Jean-Baptiste of getting the team off the ground. "We were really trying to figure out, what's the process? What's the infrastructure? How do we help teams ask, 'Who else?' and really build with that inclusive lens."

People across the company were excited. "We've actually created a group called Inclusion Champions, who are 2,000 Googlers from historically underrepresented backgrounds who help us test our products before they launch," she says. Now, with a process in place that focuses on ideation, user research and design, user testing, and marketing phases, she says product inclusion is a long-term commitment.

Below, Jean-Baptiste tells Bustle about Google's new products, being an introvert, and the worst career advice she's ever gotten.

Google announced several new products on Sept 30. Is there anything you worked on that you're most proud of?

I'm proud of the work on the Pixel camera, where all different skin tones show up beautifully and accurately. That's because the team was super intentional about doing a lot of testing. It's important because people are capturing memories of the people, places, and things they most care about. When I use a Pixel and take a picture of my family, who has all different skin tones, it's really powerful that everyone shows up in the way that they want to. That's how technology is supposed to work.

How do you make recognizing biases part of your everyday routine?

We all have bias, and it's important to be intentional about being on a learning journey. You have to know you're going to make mistakes. Humility is important, and so is naming things when you make a mistake — name it, apologize, and be open to feedback. I try to question the "Why?" behind certain perspectives I have or that others have. I've heard that if you ask, "Why?" five times, you get to the core of an issue. Question, respectfully, and then give space to listen.

We should all work to create a safe space for people who show up in different ways.

How do you get pumped up before a meeting or a speaking engagement?

I love power posing. I've been known to do it in the bathroom, backstage, wherever. It really helps to calm me. Recently, I've been doing some improv exercises, which have been helpful for warming up. I'm an introvert, so getting into the right mind frame is important beforehand.

As an introvert, do you have a tip for speaking in meetings?

I had a manager at Google who realized that I was pretty quiet in meetings, but would share my thoughts after via email or in a 1:1 setting. He said, "I'm happy to create space for you in team meetings and you don't have to take the space, but I want you to have that opening." That was helpful to me as a manager tip.

I try to say one thing at the beginning of a meeting I'm attending. Once you break the ice, it takes the pressure off and it's easier to continue participating. But you don't always have to express thoughts live in meetings. We should all work to create a safe space for people who show up in different ways — creating presentations or sending documents to the team afterwards — because that leads to more innovative outcomes.

What did you learn while writing Building For Everyone?

I learned I like to collaborate. Even in something that's supposed to be just me creating, I brought in as many people as possible. I also learned to let ideas flow. I didn't write the book in chronological order. I focused where I was most inspired. Lastly, things don't have to be perfect at the beginning — you can always go back.

Push yourself, but also give yourself grace.

My former manager always said, "Lead with yes, and doors will open." That was powerful and it's been a grounding mantra in my career. As an introvert, I'd shy away from things that felt like a stretch for me — like public speaking — but stretching is one of the ways that you grow. My former manager encouraged me to present at leadership meetings, and I realized I needed to practice public speaking to get better. So I said yes to any speaking opportunity for two years. I still don't love it, but I was able to build muscle around it and improve.

To try to be a carbon copy of people in a company. Of course, you should have a growth mindset and learn new skills, but your strengths are what makes you unique. I probably don't seem like the typical tech person. At first, I thought I had to fit a certain mold, but that definitely wasn't true. There's a stereotype of who works in tech, and the images we've all seen of a "techie" wearing a hoodie was not who I am. Leaning into my heritage, my experiences, and the differences I bring to the table is an asset — we need more perspectives and backgrounds to build better products and services.

What's your advice for young women of color entering the tech industry?

There will be times where you may feel uncomfortable or like there's a lot you need to learn, and that's OK. Push yourself, but also give yourself grace. And make sure that you have a strong community around you. I'm grateful for the people that propel me forward, keep me honest, and pick me up when I need it. Cultivate that community and show up for them, too.