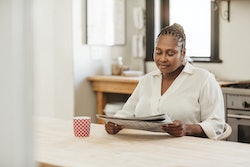 With economic pressures mounting as a fallout of COVID-19, UK newspapers are facing huge losses. The latest is The Guardian, which is cutting 180 jobs, 70 in editorial, including a large section of its Weekend offerings. It’s a terrible loss for journalism, as well as the wider cultural ecosystem of the UK.

For many of us, buying the newspaper is part of our weekend ritual. There’s something relaxing and reassuring about flicking through the colourful supplement sections over coffee, diving into a music review for a band you’ve never heard of, or becoming completely immersed in the celebrity cover interview. It’s a real treat.

The supplements that are being scrapped (Weekend, The Guide, Review and Travel) form a real cornerstone of British culture writing. For decades, they have brought us some of the most iconic covers (hello Spice Girls, 1997), and the most irreverent, witty columnists – Hadley Freeman, Coco Khan, the late Deborah Orr – with diverse perspectives that are hard to find elsewhere, in print or online.

Last week, an article on The Guardian’s site reported that annual revenues were expected to be down by more than £25 million as a result of the global pandemic – however, the paper was in trouble even before coronavirus hit. Recent cuts follow a significant slimming-down of the company back in 2018, when I was a columnist for the Family section. Back then, the entire newspaper was shrunk to tabloid size, Family was moved from a full supplement into a smaller Weekend magazine, and The Observer was also redesigned.

Being a Guardian columnist for just under a year changed my life. It landed me an agent, and my first book deal (which is out in February). It gave my work a global platform, and brought me into the hallowed world of ‘proper journalism’, with a pool of editors who believed in me and paid me properly. It shaped my writing for the better, helping me find my voice and putting me in touch with many others who liked (or disagreed with) my writing.

Black female writers, like me, play an important role in readdressing a media landscape

Black female writers, like me, play an important role in readdressing a media landscape that is 94% white and 55% male. Whether we like it or not, we are the anomaly – but, that also makes us the gatekeepers for potential change in an industry that so often underestimates us.

The Guardian Weekend really cared about obtaining different perspectives, which is why I’m devastated to see it go. In 2018, it teamed up with gal-dem to organise a history-making collaboration. Weekend editor Melissa Denes and deputy editor Ruth Lewy gave gal-dem founder Liv Little, and head of editorial, Charlie Brinkhurst-Cuff the reigns to literally takeover every aspect of the magazine: commissioning writers, photographers, illustrators and editors, and inviting gal-dem into The Guardian offices to layout the magazine, write the bylines, choose the colour scheme and work with production. There was a cover interview with Michaela Coel, a Q&A with Gemma Khan, travel tips for Black women, features on family and relationships; and I wrote a piece on the science and ethics behind DNA testing for people of colour. The magazine bumped up sales of the paper significantly, selling-out across the UK, and proving that there is a hearty appetite for diverse voices in mainstream media.

When I speak to Charlie Brinkhurst-Cuff about that takeover, she tells me it’s one of her biggest career achievements to date. “To collaborate with Weekend, a magazine I have been buying since childhood, and commission a range of non-binary people and writers of colour, was a dream come true. And the success of that project shows how urgently we require change in the industry, but also how hungry people are to see it. Now Weekend is getting scrapped, it’s almost like we are going backwards.”

Indeed, to remove so much culture from the paper in 2020 feels like stripping it of its soul, and I fear it will further discourage a younger readership from investing in print. The Weekend is The Guardian’s most popular offering; as Press Gazette notes, the Saturday edition of the paper boasts circulation 130% higher than on weekdays. It also attracts a younger, more-socially-savvy audience, many of whom buy the paper solely for its lifestyle and culture coverage. Will they bother anymore?

To remove so much culture from the paper in 2020 feels like stripping it of its soul, and I fear it will further discourage a younger readership from investing in print

It’s hard to ask cash-strapped young people to invest in journalism at the moment, but the alternative is the loss of an independent left-leaning paper, leaving the UK with less journalists to disrupt the channels of power, to interrogate the government over the Windrush scandal, or austerity cuts, for example.

Although there are reports that The Guardian plans to produce a ‘new and exciting’ Saturday supplement that will cover features, culture, books and lifestyle, the jettisoning of so much quality journalism from the newspaper, including some of its most diverse columnists, is a significant blow; resulting in even less representation in our predominantly white and middle-class media landscape.

If we want to keep what will be left of The Guardian, it’s not enough to simply lament these losses, we need to support the work of writers we love by sharing their articles, buying the paper, and paying for their work online, too.

More like this
Here’s Where The NHS Nurses’ Strike Currently Stands
By Sophie McEvoy
Gen Z Are Twice As Likely To Identify As Queer, According To New Data
By Sam Ramsden
How To Help Those Affected By The Turkey-Syria Earthquake
By El Hunt
'Consent' Is Not Just One Person’s Story, But Hundreds
By Shahed Ezaydi
Get The Very Best Of Bustle/UK
Sign up for Bustle UK's twice-weekly newsletter, featuring the latest must-watch TV, moving personal stories, and expert advice on the hottest viral buys.