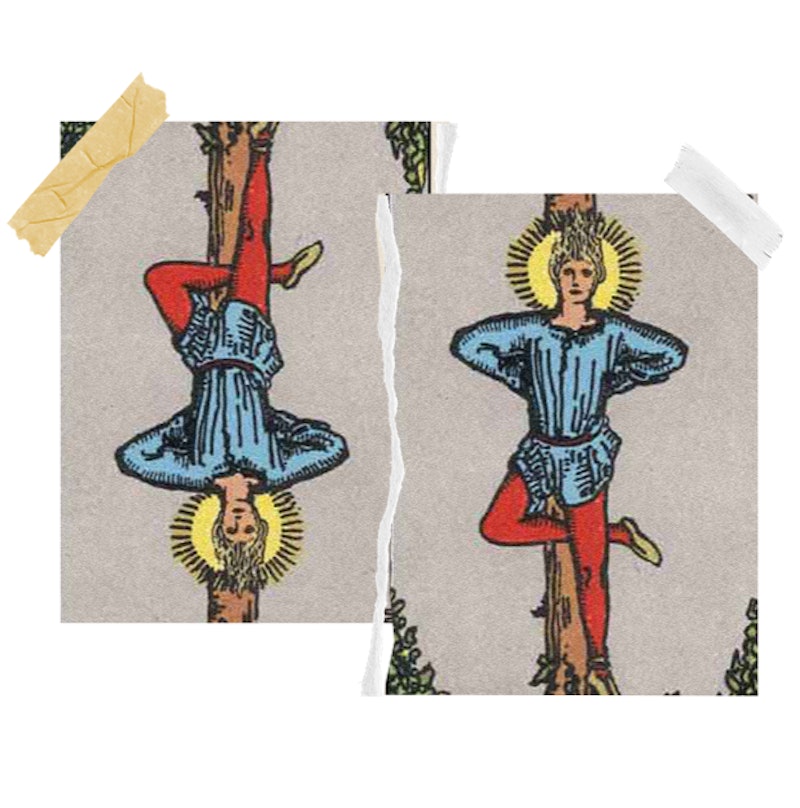 Rider-Waite Tarot
By Kristine Fellizar
May 10, 2022

The tarot may not hold all the answers into what the future may bring, but it is a helpful tool to turn to when you’re in need of guidance. Whether you get a tarot reading done professionally or you’re pulling cards from your own deck, you may come across the Hanged Man. At first glance, the card may seem like a bad omen, especially with the figure hanging upside down by one ankle. It could be easily interpreted as you being stuck in a situation. But according to Michelle Welch, professional tarot reader and teacher, the meaning of the Hanged Man tarot card is much more than that.

“Out of the 78 cards in a traditional tarot deck, the Hanged Man appears within the Major Arcana (think of them as archetypes or major life events) as the twelfth card,” Welch tells Bustle “The number 12 presents psychological or spiritual seeking.” According to Welch, many see the card and immediately interpret it as someone being stuck in life. However, the figure depicted on the card actually originates from the story of the Norse god Odin, who voluntarily bound himself upside down to the Tree of Life. “He did this for nine days without food or drink to gain enlightenment, which is indicated by the halo over the figure’s head,” Welch says.

What Does The Hanged Man Tarot Card Mean?

It’s important to remember that everyone interprets the tarot in their own way, so some may interpret the card differently. The Hanged Man is associated with the sign of Pisces and the planet Neptune, so there may be some creativity involved in your decision making process. Since the Hanged Man is the twelfth card, it may take anywhere from 12 months, to 12 weeks or 12 days before you take that next step on your journey.

What Does The Hanged Man Card Mean When It’s Upright?

Welch interprets an upright pull as the need to slow down and seek more guidance of some kind. “This is by choice, which is why it is more of a disciplined sacrifice or surrender which may result in a delay of sorts instead of merely being stuck in life,” she says. “The Hanged Man upright represents seeing things from a different perspective, which can result in growth by letting go of old ways.”

Garbis, who interprets the Hanged Man as being a card about waiting, sees an upright pull as a pause before a big event occurs. For example, it could be a period of you being single before you meet someone, or a few months of being unemployed before you start a new job.

“The symbol that the man is making with his leg crossed upside down means eventual attainment,” Garbis says. “Since it is a card of waiting, when upright, it usually means that something is going to happen. If you were to ask a yes or no question, it’s not a ‘no’ card, it’s a ‘not yet’ card.” Take it as a sign to have some patience, and what you want will happen.

What Does The Hanged Man Card Reversed Mean?

When the Hanged Man is pulled in reverse, it may indicate more of a struggle than a surrender. You may be asking about a situation that you’re holding on too tightly to, and it’s causing some frustration.

“When reversed, we may not want to see other perspectives to change or grow,” Welch says. “It also may indicate a crossroads where we need to pause to make a decision. This could relate to relationships, jobs, purpose, or any area of life. You might want to ask yourself, ‘What is hanging you up?’”

Garbis adds it’s important to look at the cards around it, or maybe even pull a clarifying card. If the Hanged Man reverse is pulled with the Sun, which represents happiness and fulfillment, the Hanged Man reverse could symbolize enlightenment. What you want is finally happening or you’ve already obtained it.

More like this
The Sun Tarot Card Meaning, Explained
By Brittany Beringer
Here's The Spiritual Meaning Of The May 2022 New Moon
By Nina Kahn
Rihanna & A$AP Rocky’s Astrological Compatibility Proves They'll Be Amazing Parents
By Nina Kahn
The Meaning Of Angel Number 555, According To Numerologists
By Kristine Fellizar
Get Even More From Bustle — Sign Up For The Newsletter