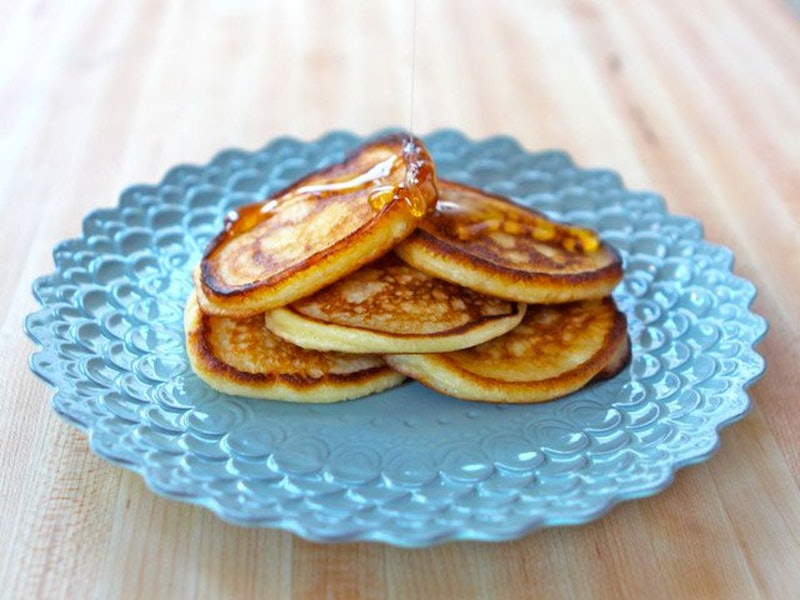 It’s fried, it’s crispy, it’s delicious… and Hanukkah wouldn’t be the same without it. The latke, a fried potato pancake, is one of the most popular foods served during the Festival of Lights. Not only is it a satisfying winter treat, but history of the latke is actually kind of fascinating.

Let me take you back to biblical times. The story of Hanukkah, including the history of the latke, is found in the Books of the First and Second Maccabees. It says that in 168 BC, the Assyrian King Antiochus captured Israel and defiled the Temple of Jerusalem, which was considered the holiest religious site by many Jews. After a battle over the territory, the Maccabees — a group of guerrilla warriors led by a priest, Mattathias, and his five sons — removed the Assyrian idols from the temple’s grounds. In order to see in the darkness, they lit a menorah. They only had enough oil for one night, but miraculously, the menorah glowed for eight nights straight. Three years later, the Maccabees led the fight to liberate Jerusalem from King Antiochus, and they won.

This, of course, explains why people celebrate Hanukkah for eight days, and eat oil-fried foods to celebrate. Now, why this specific dish and not, say, French fries or fried chicken? Latkes come from the story of Judith, a Jewish woman who was known as a heroine for beheading the Assyrian army’s general, Holofernes. How did she do it? She fed him some salty, cheesy pancakes and went in for the kill when he passed out drunk on her wine. After presenting his head to her people, the Israelites were then able to lead a surprise attack on the Assyrian army’s camp, which helped them to save their land.

Some believe that these two events correlate with the other (Judith beheading a general during the time of the Maccabean revolt), but other historians feel that these events took place hundreds of years apart. Either way, the tradition of celebrating Hanukkah with latkes was first documented in 14th-century Italy. However, they were made with ricotta cheese, not potatoes.

It wasn’t until the 19th century that crop failures in Poland and Ukraine led to a mass planting of potatoes. The spuds were so readily available in Ashkenazi Jewish communities that people began making latkes with them, too. Today, most Ashkenazi Jews associate latkes with potatoes.

Make Your Own Latkes Using These Recipes

This quick recipe for Easy Potato Latkes is by Yummly user Jo Cooks and can be whipped up in just 45 minutes. It’s a total classic. As one reviewer puts it, “Great, easy and quick. Very similar to what my mom always made.”

Throw it back to the Middle Ages with this Cheese Latke recipe. It calls for one cup of whole milk ricotta cheese and makes a whopping 17 servings — so there will be plenty to go around your holiday dinner table.

Brighten up your table with Rainbow Latkes. This creative recipe serves up a whole stack:

Alternatively, cut down on prep work by going all in on your favorite flavor.

For a creative twist that doesn’t stray too far from tradition, what about Sweet Potato Latkes? This dish combines sweet potatoes with carrots and onions, and amps up the flavor with dashes of garlic powder and curry powder.

These Curry Vegetable Latkes are made with a base of zucchini, carrot, and onion and infused with tons of flavor, thanks to dashes of curry powder, allspice, cumin, cayenne, and pepper. A dollop of sour cream (or Greek yogurt or tzatziki) on top makes this dish sing.

More like this
An Expert Weighs In On The Viral Raw Carrot Salad Trend
By Alexis Morillo
16 Trader Joe's Appetizers That Are Total Party-Pleasers
By Kaitlyn Wylde
8 Things You Can Do To Appreciate Lunar New Year
By Elizabeth Tsung
Dolly Parton Released 4 New Baking Mixes With Duncan Hines
By Alexis Morillo
Get Even More From Bustle — Sign Up For The Newsletter
From hair trends to relationship advice, our daily newsletter has everything you need to sound like a person who’s on TikTok, even if you aren’t.

This article was originally published on Dec. 22, 2016