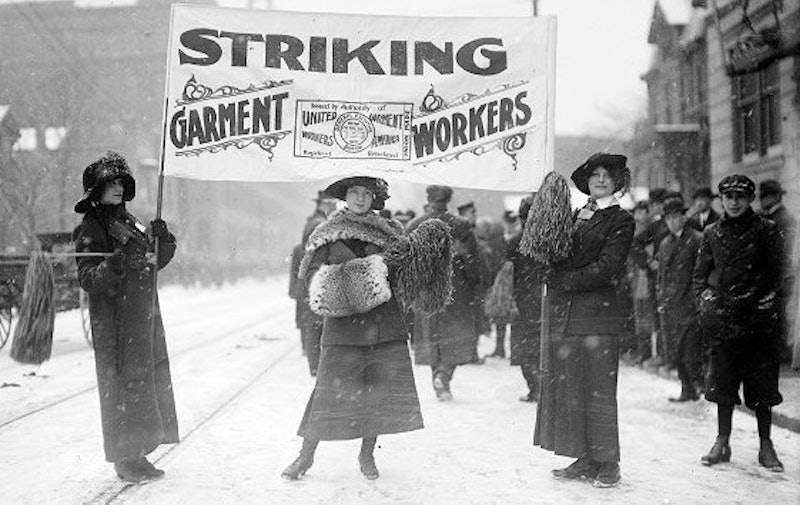 March has been associated with women's rights for over a century, in large part because of the labor movement. "The story of the labor movement is often told through the battles of manly men in jobs for men — miners and sit-down strikers, the Haymarket Martyrs, and so on," Sarah Jaffe, a labor journalist and author of Work Won’t Love You Back and Necessary Trouble: Americans In Revolt, tells Bustle. "But have you heard of the Woolworth's sit-down strike, or the Lowell mill girls? The Uprising of the 20,000? The Atlanta washerwomen's strike?" Women played a huge role in the rise of labor rights in the U.S., Jaffe says, and that's where Women's History Month has its roots.

A mid-19th century protest is credited with kick-starting this association. Female garment workers in New York City staged a massive protest on March 8, 1857, protesting their poor working conditions and low pay, according to the Chicago Women's Liberation Union. Garment work was dangerous and often involved child labor. The organizations behind the strikes, which were repeated on March 8 in 1908 by New York needleworkers and throughout the year, were often dominated by women, including Clara Lemlich, Elizabeth Gurley Flynn, Lucy Parsons and Mary Harris Jones (aka, Mother Jones), who coordinated protests, gave powerful speeches, and traveled the country organizing female workers.

These protests are also why March 8 is International Women's Day, Jaffe says. "A march in New York in February of 1909, commemorating the strikes of women garment workers, inspired Clara Zetkin, a German Communist, and her comrades to call for an annual Women's Day."

In the 1970s, activists began to think beyond the day to the whole month. Much of the drive behind what we now know as National Women's History Month came from a Sonoma, California, activist and history teacher named Molly Murphy MacGregor. In 1978, she and fellow members of the Education Task Force of the Sonoma County (California) Commission on the Status of Women instituted a local "women's history week," where schools and organizations celebrated women's achievements in specially created curriculums. There was even a parade. “We joked amongst ourselves: first the county, then the state, then the nation, then the world,” MacGregor said in an interview with Press Democrat.

The push to have women's contributions to American history more formally recognized expanded from there — with other notable women helping it along. In 1980 MacGregor co-founded the National Women's History Project with fellow activists Mary Ruthsdotter, Maria Cuevas, Paula Hammett, and Bette Morgan, which began a more formal push to take an official period recognizing women's history national. In 1979 Macgregor teamed up with academic historian Gerda Lerner at Sarah Lawrence College to produce a 17-day conference on women's history and its influence, which brought the effort huge publicity from the likes of Ms Magazine, then the foundation of America's feminist press

But MacGregor, Ruthsdotter, and other activists weren't done. The group enlisted the help of Maryland Democratic Representative Barbara Mikluski, who'd later be a Senator. In 1980, President Carter declared the week of March 2-8 "Women's History Week", and Mikluski and another Senator, Orrin Hatch, sponsored a bill to support the idea of the week repeating in 1981, according to the website for the National Women's History Project. It was still only year-to-year, and the National Women's History Project thought they could do better.

MacGregor and the rest of the organization worked hard at state level, and by 1986, 14 different states across the U.S. celebrated the entire month of March as Women's History Month. It spawned new college history lessons, public school curricula, and resources aimed at teaching communities about what women had done for America. At that point, state governments themselves started to lobby heavily for it to be a national event, and in 1987, they finally succeeded.

Women have been working to enshrine March as an energizing time for women's history and recognition for over 100 years. And that legacy continues today. "Recent years have seen the organizing of women's strikes on March 8 around the world," Jaffe says, including 2017's Day Without A Woman, where women withheld their labor in protest of then-President Donald Trump. It's high time to remember how the labor movement was foundational to women's history, and the creation of the month we use to commemorate it. "But since we've declared March Women's History Month, perhaps we can spend more time learning our more radical labor history."

From labor organizers and the anonymous thousands of needle workers in the 19th century to history teachers and activists in the 20th and 21st, National Women's History Month has been a labor of love for countless women.

This article was originally published on March 1, 2018