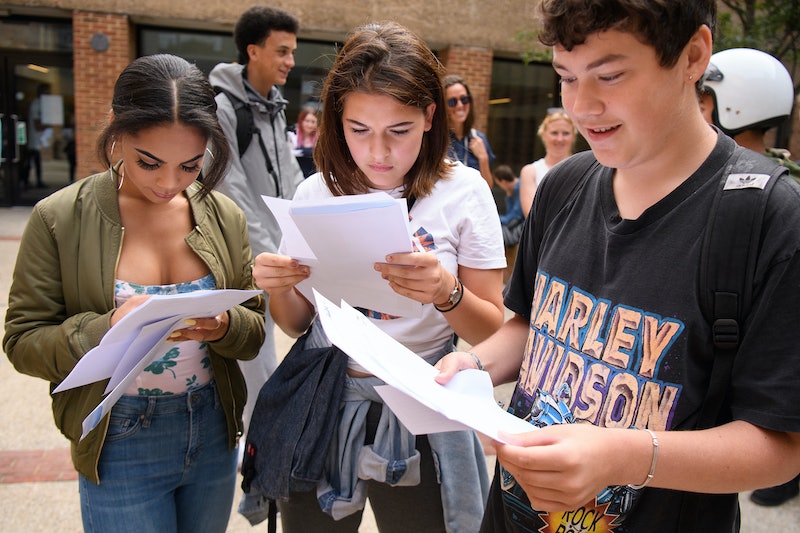 Exam results day always bring with it worry, excitement, and ultimately the ability to decide which step you take next in life. But 2020 brought its own unique set of challenges for students when a global pandemic forced the country to halt. It meant traditional exams and assessments were cancelled for A-Levels and GCSEs at schools and colleges closed across the country.

While some students rejoiced at the thought of no school or exams, for many, there were concerns, especially when the government announced that grades would be decided by their teachers based on mock exams, classwork, and predicted grades. Fears about certain students being at a disadvantage because of racism, classism, and unconscious bias began to mount. Although the school you go to shouldn’t affect the grades you get and your start in life, this year was proof that it does. According to one study conducted by the universities of Birmingham and Nottingham, of the 500 students spoken to, 81% of students from private schools were satisfied with the results compared to 67% from state schools.

And already in Scotland, one of the first places to get results in, there has been an influx of disappointed students after a quarter of teacher’s predicted grades were marked down through the government’s standardisation process. On August 11 the Scottish government decided to reinstate 124,000 downgraded results – but it still set a worrying precedent.

In England, disappointment could be even greater, as there is an expectation that 39% of teachers’ grade assessments will be marked down, the Guardian reports.

So if you aren’t happy with your results, or think that something might have gone awry, here’s how you can appeal your GCSE and A-Level results:

How Have Grades Been Calculated?

In England and Wales grades are being dictated by an algorithm. Schools and colleagues submitted a ‘centre assessment grade’ for each of their student’s subjects as well as a rank order of each student by subject, based on which students they believe are most secure receiving that grade. The centre assessment grade was based on mock results, homework, and classwork, and other relevant evidence. From there, the exam board standardised the grades based on previous national results in the subject and your school or college’s results in recent years.

In Scotland it was announced by the Scottish Qualifications Authority (SAQ) that coursework from National 5, Higher, and advanced Higher students wouldn’t be marked. Instead teachers were told to use their judgement to estimate a grade and band for each student. The SQA then “checked and validated” the estimations to “ensure consistency across schools and colleges, and with results from previous years.” As a result, 124,000 pupils had their results downgraded but, as stated above, those have now been reverted and the SQA is taking teachers’ predicted grades as final.

Similarly in Northern Ireland teachers were asked to predict grades. These grades were passed onto the Council for the Curriculum Examinations and Assessment (CCEA) who determined final grades. If a school receives a result and feels it’s wrong for a particular student, mock grades can be used.

What Are The Reasons You Can Appeal?

In England you can appeal if you believe there was an administrative error in calculating your result or you think bias or discrimination played a role in the result you got. Sadly, however, the gov.uk website states that “you can’t appeal your grade because you don’t agree with the centre assessment grade or rank order position submitted by your school or college.” All they suggest for students unhappy with their result is re-sitting the exams in the autumn.

In Wales, you can appeal if you think there has been an administrative error, if you think there was bias or discrimination in calculating your result, or if exceptional circumstances affected your performance or grade. See here for more details on that.

In Scotland, grades are now based on your teachers’ predictions. At the time of writing (August 13) it is not yet clear how students can appeal the decision made by their teachers.

For Northern Ireland, the CCEA simply states that you can apply for a review of your results if you have a “query” about them.

How Do You Appeal Your A levels & GCSE Results?

In England, students must speak to their school to ask them to submit an appeal on their behalf. Ofqual states: “If your school or college won’t submit an appeal to the exam board on your behalf, it must have a process in place for you to ask for a review of that decision. You should frst raise this with your school or college. If you wish to complain, you should speak to the exam board for further guidance.”

Students in England can also ask to substitute their grades with what they received in mock exams, provided they sat their mocks under exam conditions and could be “validated” by the school. At the time of writing (August 13) there is no firm guidance on how students can formally ‘accept’ their mock results.

If you are appealing in Wales, a request for review can be sent by your school or college on your behalf. If that review still doesn’t yield the results you were hoping for, you can ask for a further, independent review, so long as you submit the request within 14 days of the first review’s outcome.

As previously mentioned, in Scotland, grades are now based on your teachers’ predictions. At the time of writing (August 13) it is not yet clear how students can appeal the decision made by their teachers.

In Northern Ireland, the Chief Executive of the CCEA has said that this year “it is not possible to ask for examination papers to be reviewed as would be normal.” However, schools can use results from your mock exams to appeal if they feel a pupil's grade is wrong. Schools will handle appeals but students have the right to access the information used to inform their grades. You can also complain to the exam board if you feel you’ve been treated unfairly.

What Is The Deadline For GCSE & A Level Result Appeals?

In England, Wales, and Northern Ireland the deadline is September 17. In Scotland, the deadline was August 21, but now that marks have been reverted back to teachers’ predicted grades, the appeals process will likely be different. At the time of writing (August 13), no official guidelines have been issued on that.