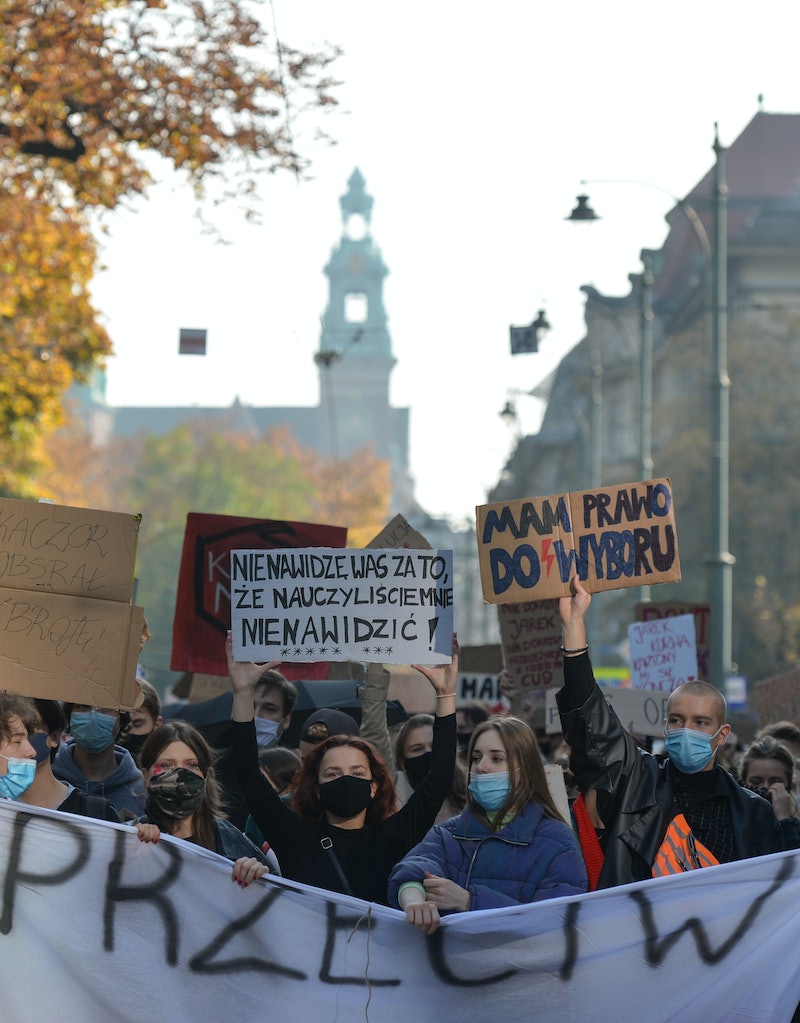 In October 2020, Poland passed a law that deemed abortions in cases of foetal defects to be unconstitutional. Despite having to delay its implementation due to tens of thousands of people protesting against the law change, the new restriction officially went into effect on Jan. 27. Prior to this, Poland’s abortion laws were already very restricted compared to the rest of Europe and the Council of Europe’s Commissioner for Human Rights Dunja Mijatovic has written on Twitter, “Removing the basis for almost all legal abortions in Poland amounts to a ban and violates on human rights.”

Find out more about the ruling, the protests, and what you can do to help below.

The New Abortion Ruling In Poland

Prior to Oct. 22 abortion was legal in Poland if the pregnancy was a result of rape or incest, if the life of the mother was endangered, or if the baby would be born with serious foetal defects. This could include serious developmental or physical disabilities. The New York Times reports that the latter account for 1,074 of the 1,100 legal abortions performed in 2019.

However, on Oct. 22 the highest court in Poland ruled that abortions conducted due to foetal defects would now be unconstitutional. Chief Justice Julia Przyłębska said that having an abortion for this reason amounted to “eugenic practices” and that the constitution in Poland protects the right to human life.

The court ruling approved legislation made by lawmakers in Poland’s Law and Justice Party (PiS) — the largest political party in Polish government — on Jan. 27. This means women seeking an abortion can only do so if their life or health is at risk or if the child was conceived through incest or rape.

Per BBC News, in 2019 98% per cent of abortions in Poland were conducted because of “foetal abnormalities”, meaning that the law has “effectively banned the vast majority of pregnancy terminations.” Women’s Rights Groups have estimated that each year 200,000 abortions are performed illegally in Poland or by Polish citizens travelling abroad, and the new ruling will likely see this figure increase. Doctors found to be performing illegal abortions under the new ruling may face jail time.

The Protests In Poland

Since the ruling, tens of thousands of activists have taken to the streets of Poland to protest the decision. Elsewhere, people have turned up outside the Polish embassies in London and in Kyiv to show solidarity too.

Last year, Polish protestors marched with signs that read “this is war” and “I wish I could abort my government,” with some dressing as characters from The Handmaid’s Tale. They have blocked streets in the capital city Warsaw and across Poland and have planned more and have continued mass demonstrations planned throughout this week into the new year. Following the certification of the law in January, thousands marched in Poland’s streets. Warsaw’s mayor Rafal Trzaskowski voiced his support for the protestors, “calling on women to reject the decision in the streets,” per the BBC. Some women have also gone on strike, it’s been reported, though no official figures are available on that.Similar action was taken in 2016 when Poland’s government were debating a total ban on access to abortions.

The governing Law and Justice Party has been criticised for their links with the Catholic church which are thought to undermine the independence of the court. In Poland, doctors can already deny patients access to contraception or legal abortions on the basis of their religious beliefs.

Marta Lempart, a leader of the Polish Women's Strike, led the mass protests against the abortion ban. On Feb. 11 she told The Associated Press she had been charged for her involvement in the action against the new laws. ABC said that some of the charges against her include the “malicious obstruction of a religious service after protestors had interrupted Mass services. Similarly, she’s charged with praising vandalism of churches. She also faces the charge of causing an epidemiological threat for organising protests during the coronavirus pandemic and insulting a police officer. She could face six months to eight years in prison.

The Independent reported that other activists have been arrested during the marches but, according to Lempart, the courts have dropped many of their cases.

Watching protests from afar can make you feel helpless. However, there are things you can do to support activists on the ground in Poland.

Though it may seem like nothing, raising awareness on social media is important. Making your followers aware of what's happening helps continue the conversation and put pressure on lawmakers in Poland. It encourages the media to pay more attention and also raises the profile of organisers and groups on the ground who support these issues all year round.

Donating to organisations working on the ground to protest this issue is one of the best things you can do. If you're able, consider donating to: