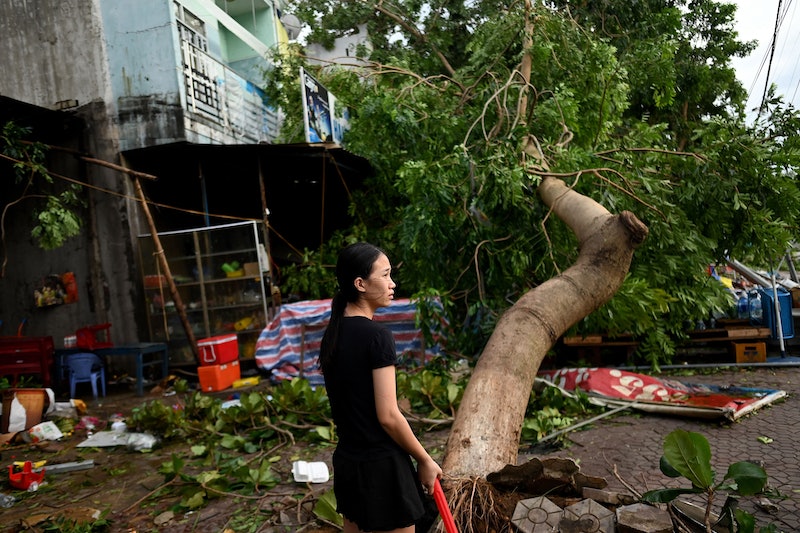 At least 15 people have been confirmed dead and many more reported missing in central Quang Nam province as Typhoon Molave made landfall on Wednesday (Oct. 28) in Vietnam. The typhoon, one of the strongest storms in the region in decades, packed sustained winds of up to 103 miles per hour and lashed the coasts of South East Asia with torrential rains causing flash floods and landslides across the Philippines, Cambodia, and now, Vietnam.

Find out more about Typhoon Molave, its impact, and what you can do to help below.

Known locally in the Philippines as Typhoon Quinta, the hit the southern island of Luzon on Sunday (Oct. 25) before heading west across the country, with 80mph winds and heavy rain causing seven landslides and flooding in 11 areas in the Philippines, according to the country’s disaster monitoring agency. Over 25,000 villagers have been evacuated from their homes and at least 13 have been reported missing since the storm.

Meanwhile, flash floods in Cambodia have claimed 43 lives and forced the evacuations of 47,580 others so far, the National Committee for Disaster Management (NCDM) said in a report on Tuesday (Oct. 27).

Molave is the fourth storm to hit Vietnam in what has been a tumultuous month, with flash floods and landslides affecting more than one million people, leaving people without electricity and damaging 56,000 houses. Rescuers have been scrambling to find those buried under landslides but efforts have been hampered by bad weather at the tail end of the storm, reports state.

Many remote villages in the region are inaccessible due to damaged roads and further landslides. Officers have been ordered to urgently bring in troops to help landslide-hit villages by any means necessary, “including by using helicopters,” Deputy Prime Minister Trinh Dinh Dung said in a statement.

“We can forecast the storm path or the amount of rain, but can’t predict when landslides happen,” Trinh Dinh Dung added. “The road is covered under deep mud and heavy rains are still lashing the area, but rescue work has to be carried out quickly.”

Earlier this week Prime Minister Nguyen Xuan Phuc urged cities and areas in the typhoon’s path to prepare for its impact. “This is a very strong typhoon that will impact a large area,” said the Prime Minister before the storm made landfall. At least 40,000 people in the coastal Quang Ngai province were evacuated to emergency shelters and authorities shut down offices, factories and schools.

The equivalent of a Category 2 Atlantic hurricane, Molave hit just south of the Vietnamese resort city Da Nang on Wednesday, inflicting further devastation on an area still reeling from a month of widespread deadly flooding.

Northeast Thailand has also been inundated with flooding since the storm hit the region. The country’s Department of Disaster Prevention and Mitigation (DDPM) reported that homes in the northeastern Nakhon Ratchasima province were inundated when the Moon River burst its banks affecting some 31 villages in the province and damaging 570 hectares of farm lands.

Although Molave has weakened to a tropical depression after making landfall, heavy rain is forecast to continue in parts of Vietnam, southern Laos, northern Cambodia and eastern Thailand, with flash flood and landslide warnings for central Vietnam, Vietnam’s weather agency said. The storm is expected to bring rain and dangerous winds as it pushes north, causing further flash floods and landslides, and is expected to reach Laos later on Thursday (Oct. 29).

The Impact of Typhoon Molave

The risk factors following any natural disaster often stretch far beyond its immediate impact. The International Federation of Red Cross and Red Crescent Societies (IFRC) estimates at least 150,000 people are at immediate risk of food shortages and hunger in Vietnam alone after flood waters ploughed through crops and killed more than two million cattle and poultry.

The potential for disease and infection is high and of course keeping the spread of COVID-19 is a concern in these circumstances.

Not only that, the financial impact of a region struggling from the economic fallout of the pandemic will surely affect the country for years to come.

“The relentless storms and flooding are taking a devastating human toll, further destroying livelihoods and isolating millions of people," Nguyen Thi Xuan Thu, president of the Vietnam Red Cross Society said on Wednesday. "All our hard work in containing the social and economic fallout of COVID-19 is being undone by these massive storms hitting us one after the other.”

What Is Being Done To Help Victims?

The Vietnamese government has allocated 500 billion VND ($21.6 million, or £16.7 million) to support the relief and recovery efforts in five affected provinces and the Filipino government has mobilised a disaster relief aid following the typhoon drawing from a national stockpile of ₱890.5 million ($18 million, or £14 million) worth of food packs and funds to those affected. The Asian Development Bank have provided more than $3 million in aid but humanitarian organisations say more international support is needed.

The IFRC has launched an urgent $4.2 million appeal to help those affected, adding that the back-to-back storms have stretched relief teams to the limit.

How You Can Help

Watching the disaster unfold from afar can make you feel seriously helpless. However, there are things you can do to support the rescue efforts on the ground in the region. Donating to organisations that are working on the ground to rescue survivors and provide food and shelter is one of the best things you can do. If you're able, consider donating to ActionAid or the IFRC Disaster Relief Fund.

More like this
Pret & Costa’s Coffee Is The Strongest On The High Street, According To Which?
By Sam Ramsden
Twitter Has *A Lot* To Say About The "Single Penalty”
By Sam Ramsden
Here’s Where The NHS Nurses’ Strike Currently Stands
By Sophie McEvoy
This Is When Netflix Is Going To Start Charging You For Sharing Passwords
By Darshita Goyal
Get The Very Best Of Bustle/UK
Sign up for Bustle UK's twice-weekly newsletter, featuring the latest must-watch TV, moving personal stories, and expert advice on the hottest viral buys.