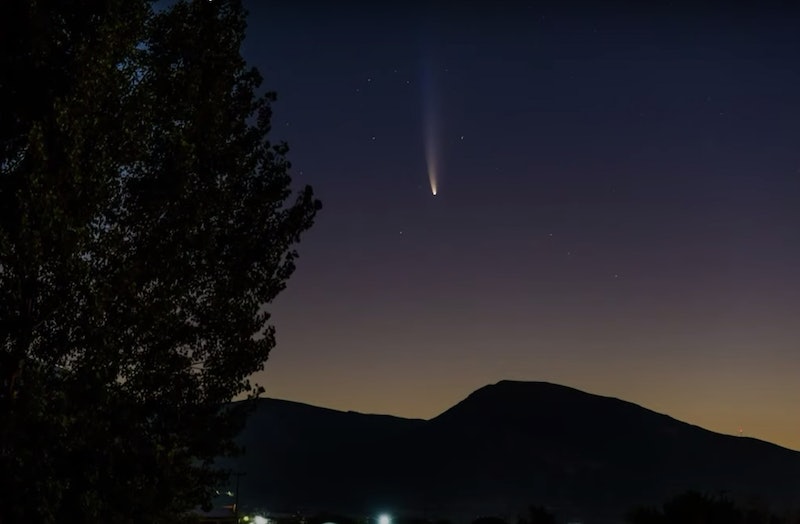 A once in a lifetime opportunity to witness the rare Comet Neowise pass through the skies is upon us. First discovered by scientists earlier in the year, the comet is visible from Earth during the month of July, and isn't expected to reappear for another 6,800 years. So, if you don't want to miss out, here's how to see the Comet Neowise in the UK.

As iNews reports, your best chance of spotting the comet is to look out for a group of stars — often referred to as a constellation — known as The Plough or The Big Dipper. Throughout mid-July, Neowise has been most visible roughly 80 minutes before sunrise at around 3.30 a.m.

The comet will be closest to Earth on July 23, below and to the right of The Plough. On July 25, Neowise will move directly under the star constellation, as it continues to move west and slightly upwards. Areas with limited light pollution will be able to see the comet on a clear night by looking eastwards towards The Plough, situated around 10 degrees above the horizon. The comet will be visible to the naked eye, although using a pair of binoculars or telescope will no doubt enhance your view.

Providing advice on how to best spot the comet, the Royal Astronomical Society explained: "To find the comet, make sure you have a clear northern horizon unobstructed by tall buildings, and ideally away from major sources of light pollution. If you have them, use a pair of binoculars to look for the bright haze of the comet, and the fainter tails."

"There are reports of people being able to see it with the naked eye under good conditions, but some optical aid will always improve the view."

Comet Neowise last entered the inner solar system about 4,500 years ago, and was discovered in late March by NASA's Near-Earth Object Wide-field Infrared Survey Explorer. The comet managed to survive a close encounter with the sun, and at its closest distance from Earth, will be roughly 64 million miles away — which equates to around 400 times further away than the moon.

Discussing the "interplanetary iceberg," a NASA spokesperson said: “A comet has suddenly become visible to the unaided eye," adding, "The interplanetary iceberg survived solar heating, so far, and is now becoming closer to the Earth as it starts its long trek back to the outer Solar System. As Comet NEOWISE became one of the few naked-eye comets of the 21st Century, word spread quickly, and the comet has already been photographed behind many famous sites and cities around the globe.”

More like this
Here’s What TikTok's "Mascara” Trend Is *Really* About
By El Hunt
Ben & Jerry’s New Sundae Flavours Are A Chocoholic’s Dream
By Sophie McEvoy
What The UK Blocking Scotland’s Gender Recognition Bill Means
By Sam Ramsden
90 Epic Truth Or Drink Questions To Play 'Say It Or Shot It' With
By Bustle UK
Get The Very Best Of Bustle/UK
Sign up for Bustle UK's twice-weekly newsletter, featuring the latest must-watch TV, moving personal stories, and expert advice on the hottest viral buys.