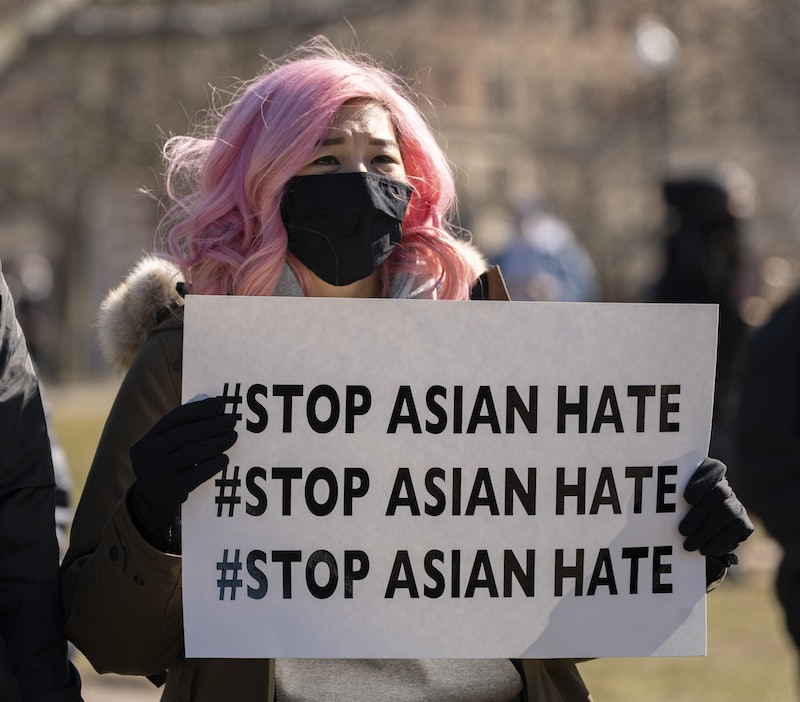 Since the beginning of 2021, #StopAsianHate has been trending on social media as celebrities, activists, and other prominent voices have shared their outrage at the rise in racist attacks towards Asian communities in the U.S., the UK, and across the globe. On March 16, the terrifying consequences of anti-Asian rhetoric were realised when a mass shooting took place in Atlanta, Georgia, with six of the eight people killed reported to be of Asian descent.

But even before this horrific event took place, violence targeted at Asian Americans had been sharply rising, the Washington Post reports, with several attacks on elderly members of the community taking place in the San Francisco Bay area during the first few months of 2021. Elsewhere in Northern California, a 30-year-old man named Angelo Quinto died while being held in police custody. Quinto, who was experiencing a mental health crisis, died after a police officer knelt on his neck for several minutes, lawyers for his family have said.

In response to this, the #StopAsianHate campaign and hashtag is drawing attention to the issue and calling on politicians and senior police officers to do more to protect the Asian community. But what else is there to know about the campaign, and what can people do to help from the UK?

What Is The #StopAsianHate Campaign?

In the summer 2020 #WeAreNotAVirus gained traction on social media as it became clear that the coronavirus pandemic was causing increased aggression towards East Asian communities in the U.S., the UK, and elsewhere across the globe.

When figures were released at the start of 2021 that highlighted a monumental rise in hate targeted at Asian communities, activists in the U.S. started to use the hashtag #StopAsianHate.

Since then, celebrities including Olivia Munn, Chrissy Teigen, and Gemma Chan have used the hashtag to share their personal stories and spread awareness. In the wake of the Atlanta shooting, Lana Condor, Elliot Page, and Dan Levy were among the celebrities who took to social media to denounce Asian Americans and Pacific Islanders (AAPI) hate. In April, the U.S. Senate voted to advance a bill which would address the rise in hate crimes against Asain Americans.

Artist Steffi Lynn was one of the first people to create an infographic based on the #StopAsianHate hashtag. It’s now been shared widely across social media in the U.S. and UK.

Lynn has previously worked with advocacy group Stop AAPI Hate and speaking to Harper's Bazaar about the traction her post got she said, "The hope is to unite our community and fight anti-Asian hate crimes and protect our elders. The racism has always existed, but the pandemic has provided new avenues to misplace anger in hateful ways against minorities and it's not okay. It is time to stop Asian hate."

#StopAsianHate In The UK

This issue is by no means exclusive to the U.S. According to 2020 police figures, hate crimes against Asian communities soared in the UK last year also.

The data shows that the rate of hate crimes against Chinese people between January and March 2020 was nearly three times that of the previous two years. At least 267 offences were reported within the first three months of the pandemic, with some of the victims reporting being spat at, assaulted, coughed on, and verbally abused.

Between January and June 2020 the Met Police recorded 457 crimes related to racism against people of East and South East Asian (ESEA) descent.

In May 2021, celebrities and public figures including Gemma Chan, Henry Golding, Benedict Wong, Zing Tsjeng, and Susie Bubble helped to launch a Stop Asian Hate Campaign here in the UK. The campaign is aiming to raise £50,000 via GoFundMe, which will be issued to grassroots organisations working with ESEA communities across England, Scotland, Wales, and Northern Ireland.

Announcing her support for the initiative on her Instagram, Chan wrote, “Like many others, I worry for family members every time they leave the house or use public transport. My mum has worked for the NHS for most of her life – she and my dad have been followed and subjected to a number of verbal assaults since the beginning of the pandemic.”

Chan went on to speak about the increase in Asian hate crimes in the UK, citing some specific examples, including the assault of Singaporean student Jonathan Mok on Oxford Street in February 2020.

“There is an urgent need for increased awareness and support so I am proud to help launch this fund,” Chan wrote.

By using #StopAsianHate, you’re raising the profile of the campaign and creating a united force of support. To find out more about this issue, how it manifests in the UK, and how you can help, check out:

If you want to offer your time, money, or support to organisations looking to end racism against Asian communities in the UK, check out: