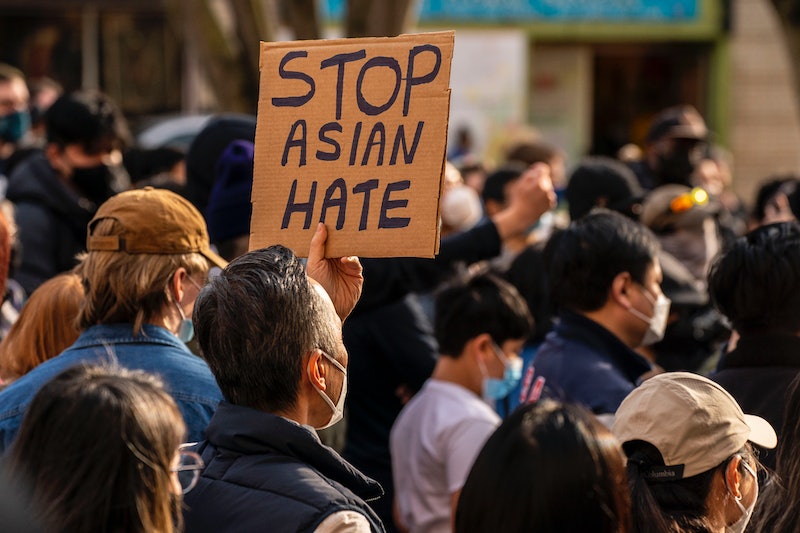 Violence against Asian-Americans has been on the rise over the past year in America, largely due to racism fueled by the pandemic. On March 16, eight people were killed in a series of Atlanta-area shootings at three massage spas, and six of the victims appeared to be Asian women, per NBC News. While 21-year-old suspect Robert Aaron Long confessed to the shootings, Cherokee County police suggested that the crimes were “not racially motivated,” but rather sparked by his “addiction to sex,” according to ABC News. But as New York Magazine journalist E. Alex Jung noted on Twitter, South Korean newspaper The Chosun Ilbo published a quote from an eyewitness who allegedly heard Long say he planned to “kill all Asians.” With nearly 3,800 instances of anti-Asian violence and harassment reported since the start of the pandemic, as noted by the Stop AAPI Hate coalition, many news organizations and the police department have drawn criticism for failing to label the mass murder a hate crime and neglecting to mention the connection between the hypersexualization of Asian women and violent crimes.

Media outlets have also received flack on social media for their lack of coverage of the March 16 attack, with author Jenny Han tweeting that CNN was discussing The Bachelor as reports about the incident were being published. One Twitter user criticized The Daily Beast for publishing a story with sympathetic quotes from Long’s former classmates about how he “wouldn’t even cuss” as a teenager and was “big into religion.” The NAACP condemned his violent actions in a tweet, writing, “A disgusting and disturbing example of how the spread of domestic terrorism has been allowed to torment communities. These acts are the visible manifestation of hateful words birthing hateful acts! An attack on one is an attack on ALL!”

On March 17, President Joe Biden spoke about the fatal Atlanta attacks and mirrored reports that stated Long’s motive is unknown. He said, “Whatever the motivation here, I know Asian Americans, they are very concerned, because as you know I have been speaking about the brutality against Asian Americans, and it's troubling.” He also shared that he discussed the killings with the attorney general and FBI director.

In response to the March 16 murders, celebrities and other prominent figures have taken to social media to spread awareness of the rampant anti-Asian violence and express their support for those affected.

Former President Barack Obama tweeted a thread of posts about the crimes. He began, “Even as we’ve battled the pandemic, we’ve continued to neglect the longer-lasting epidemic of gun violence in America. Although the shooter’s motive is not yet clear, the identity of the victims underscores an alarming rise in anti-Asian violence that must end.”

Showing his support, actor Elliot Page retweeted TEDTalks host Elise Hu, who wrote, “3,700 anti-Asian incidents have been reported to #StopAsianHate, the majority of them against AAPI women. Enough.”

Linking to an NPR article about the March 16 violence, actor Daniel Dae Kim tweeted, calling on those in power to speak up and denounce this hate.

Actor Lana Condor shared a heartfelt tweet calling on allies for support. “Wake up... your Asian friends and family are deeply scared, horrified, sick to their stomachs and wildly angry,” wrote the To All the Boys series star. She continued, “Your Asian friend needs you, even if they aren’t publicly grieving on social media.”

In addition to her tweet commenting on CNN’s coverage of the attack, Han reposted many other Twitter users’ tweets discussing how Long’s reported sexual motivation behind the murders contributes to the hypersexualization of Asian women.

Actor George Takei also commented on the horrific events, tweeting, “These women were people, with loved ones. They were struggling and marginalized.”

Director and actress Olivia Wilde posted her compassion for the communities targeted by the crimes in Atlanta and beyond. After asking what she can do to help, she added, “They’re living in fear. They’re being brutalized and murdered. I don’t want to just express my sympathy. I need an education on what I can do to be an ally.”

Filmmaker Ava DuVernay quoted a tweet from a writer named Christine Liwag Dixon that read, “The hypersexualization of Asian women plays a HUGE part in the violence we face.” Dixon also noted the racist comments men on the street have directed toward her.

In DuVernay’s comment, she suggested how everyone can help beyond tweeting. She wrote, “Some ideas. Examine stereotypes you hold about Asian people. Work to dismantle that within yourself. Raise your voice anywhere that anti-Asian sentiment is present. Normalize calling it out.”

Below, more celebrities and high-profile figures react to the March 16 murders in Atlanta and share their support for Asian-American communities.

Bustle has compiled lists of mental health and wellness resources for Asian-American communities as well as ways for allies to assist such communities by reporting instances of violence, donating, and standing up against racism.