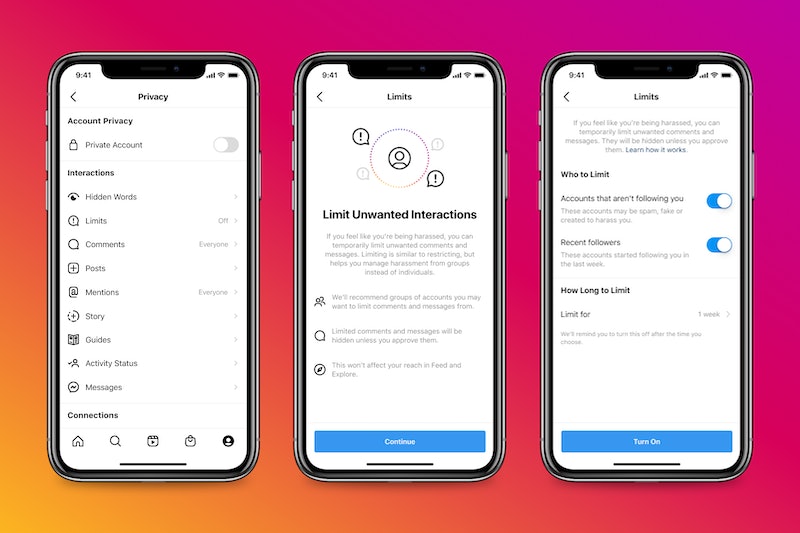 If your comments section or inbox isn’t bestie vibes only, Instagram’s newest feature, Limits, can help. Quite literally, the feature limits the messages and comments that make it to your screen — no review process necessary.

Instagram already offers some protective tools, like Block and Restrict, which are actions you can take after viewing hurtful or triggering content, and Hidden Words, which allows users to choose abusive or harmful words and emojis to be filtered out of comments or DMs. With Hidden Words, the comments or DMs get sent to a hidden request folder that you can review if you want, or ignore forever.

But Limits requires even less work on your part. You simply turn it on, and Instagram will automatically redirect interactions from certain kinds of accounts to a hidden folder. Anyone who’s a regular follower will still be able to comment or DM you as usual.

In a blog post, head of Instagram Adam Mosseri said that Limits was developed with creators and public figures in mind, as these types of accounts are more susceptible to a mass influx of hate mail, particularly from people they don’t know. That said, all users are vulnerable to unwanted messages, which is why the feature was made available to all types of accounts.

“Limits allows you to hear from your long-standing followers, while limiting contact from people who might only be coming to your account to target you,” Mosseri said.

Head to your profile, tap the Settings wheel, then Privacy. Under Interactions, you’ll see Limits, next to a chat bubble with an exclamation point. Tap Limits, and you’ll find options to block accounts that aren’t following you (which might be spam, or worse, created just to harass you) or recent followers (accounts that just started following you within the last week, AKA people you might not know). By turning on Limits, comments or DMs from accounts that meet these criteria will be hidden until you approve them.

The feature officially became available to all users on August 11. If you’re not finding it in your Privacy menu, check the App Store for an update. You might need to quit and reopen the app to refresh if Limits doesn’t load after the update. If you still don’t see the feature, hang tight — sometimes Instagram rolls out updates over the course of a few weeks.

Determine How Long You Want To Keep Limits On

Because this feature was created with people who have large followings in mind, there’s a duration setting, which allows users to set limits for certain periods of time. For example, if you’re a creator with a new product coming out and know that there will be a wave of attention on your page, you might want to set Limits for a week to make sure that you’re not subjecting yourself to negative vibes. Or, if you’re an athlete and you have a big game coming up, you might want to set limits for the weekend of the game to protect yourself from foul-mouthed non-fans. But if you’re just an average user, who occasionally gets an uncool or spammy message or comment that ruins your day, you might opt to leave Limits on for good — why leave yourself open to bad vibes when you don’t have to?

More like this
30 Clever Ways To Slide Into Your Crush's DMs
By Griffin Wynne, Carolyn Steber and Lexi Inks
Behind The Hilarity Of The "POV: You Walk Into My Room" TikTok Trend
By Lexi Inks
The Spiritual Meaning Of Angel Number 000, Explained
By Kristine Fellizar
Think Your Partner Is Cheating? These Tarot Cards May Confirm Your Suspicions
By Kristine Fellizar
Get Even More From Bustle — Sign Up For The Newsletter