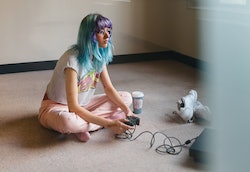 A raft of otters bobs down a river surrounded by craggy, artificial mountains. A crew of people emerge through a door in said mountains, holding a tray of fish arranged to spell out “HAPPY BIRTHDAY.” No, it’s not a fever dream you recorded in your Notes app — the people are employees of a marine mammal rescue in Vancouver, Canada, and one of the otters is celebrating their solar return.

The scene is just one of many on the rescue center’s videos on Twitch, a live-streaming platform where everyone from zoo alligators to famous gamers publicly share what they’re doing with millions. While most people on Twitch are watching streamers talk their way though League of Legends or Grand Theft Auto V, other people are watching IRL animals, beauty tutorials, or candid conversations between internet friends. Viewers like Twitch because the live element makes it feels more intimate and informal than other video platforms (like YouTube or Netflix). Only, navigating the chaotic homepage is no easy feat if you’re just learning how to use Twitch as a viewer.

Per Backlinko, a web traffic training company, the streaming platform hit 140 million monthly users in 2022 — 7.4 million of which are posting content each month. Read: there are an overwhelming number of streams to choose from. As the homepage loads, you’ll be immediately greeted with a live feed, likely of someone you don’t know playing a game you’re unfamiliar with in the middle of what seems like an inside-joke-heavy conversation with viewers. It’s not the most welcoming platform for newbies, but you’ll catch on quick.

Though gaming is the most popular content on Twitch, you don’t have to be fluent in Rocket League or a life-long Minecraft player to enjoy it. You can also find streams featuring cooking, vlogs, art, mature (meaning 18+) chats, crafting, sports, and more. Consider Twitch a more interactive way to watch and a more direct way to connect with people who like the same things.

Continue on for everything you need to know about getting into Twitch, from how to find videos you’ll like to making friends on the platform.

How To Join Twitch

Anyone can lurk on Twitch without signing up — streaming is free— but making an account and filling out your profile allows you to chat with viewers in livestreams, favorite videos you like, and set up a wallet so that you can subscribe to channels you enjoy. To sign up, tap the button on the upper right corner of the homepage and create a username, enter your birthday, and verify your account with a code sent via email or text.

To subscribe to channels, you’ll need to load up your Twitch wallet by tapping the profile icon, then Wallet, then Purchase Gift Card. Once you have some money on your account, you can subscribe to your favorite streamers’ channels to show support and gain access to ad-free viewing, private bonus subscriber streams, messaging, and badges, which show off how long you’ve been subscribed and make you stand out the in the chat. Subscriptions typically start at $4.99 per month and offers small savings when you subscribe for longer.

How To Find Your Favorites On Twitch

If there’s a game, gamer, or streamer that you’re already a fan of through other social media, simply look directly for their content in the upper search bar. If you’ve heard about various popular channels through TikTok, you can cruise the Recommended Channels bar on the left side menu. Alissa, 23, who streams digital art on Twitch, says that it’s helpful to find some of the bigger streamers on other social media platforms that you’re more comfortable navigating before finding them on Twitch. For example, if you’re really into Fortnight and comfortable on Twitter, search the app for popular posts on the subject and browse streamers and creators there, and then look them up on Twitch.

If you’re looking to find some more streamers who are playing games that are not super popular, you’ll have to do a bit more investigating. “Twitch makes recommendations by the amount of views, so I would suggest to search for the small streamers too (by search tags and scrolling past the top names) because they might just be the content you enjoy,” Alissa says.

If you’re new to Twitch, it’s easy to get overstimulated by all of the different content and pop ups, so having some sort of game plan is helpful (no pun intended). If you’re interested in a certain category of video game, like RPGs, or a specific kind of stream, like a cooking demo, search those tags and then narrow in on even more specific content later. When you find a video that you like, take a look at the tags and explore those, too. Maybe you started out watching a 24/7 street food cooking stream, and then followed the tags to find auditory ASMR videos, and then suddenly, you’re in an entirely different place than you started.

Bernadette, 32, a Final Fantasy IX player, says that another way to find what you like is to experiment with vibe-specific tags, rather than content. “Search through tags like: cozy, chatty, safe space, etc. — Twitch has really boosted discoverability in the last two years,” she says, meaning it’s extra easy to find videos you might like by leaning on tags and keywords.

So think about what you’re in the mood for — passively listening to someone chat about their day while you do chores, a make-up tutorial that you’ll actually follow along with in real time, or maybe a chill chat that you actually engage with.

How To Make Friends On Twitch

Though engaging with others on the platform is not a necessary component of participating, there’s a huge social element to Twitch thanks to old school chatroom-style comment sections. When you set up a profile, you can talk with other viewers in the streamer’s chatroom, or speak to the streamer directly. “There are so many pockets of micro-communities on the platform that eventually you start to see overlap in people who are in chats. This is something I gravitate to the most because we all know each other, which makes the environment super welcoming and cozy,” Bernadette tells Bustle.

If you’re on a mission to make friends on Twitch, Bernadette suggests seeking out smaller streams (under 150 viewers) where people are more likely to be interacting in the chat. “It's a lot more personal in those streams that are smaller.”

To seal the deal and become friends off Twitch, or support streamers you love, Alissa says to connect on other socials. “Add people on social media and search through Discord servers for your Twitch communities — they’re great places to make friends, play and talk about common interests.”