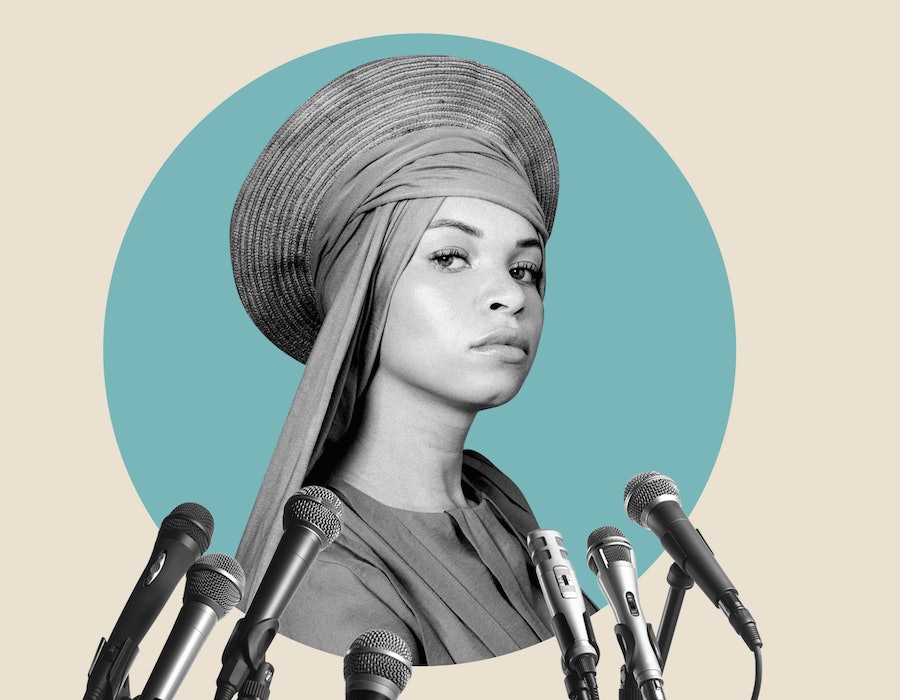 In Bustle's Quick Question, we ask leaders all about advice. Here, historian and activist Blair Imani, who focuses on women, Black communities, and the LGBTQ community, tells Bustle about educating on Instagram.

Blair Imani likes to say that Angela Davis gave her the confidence to drop out of law school. Seven weeks into her program at Howard University and on the fence about continuing, she saw Davis and Erika Totten speak at Busboys and Poets and decided to ask a question. "I grabbed the mic and asked Angela Davis about whether or not we need to create change within an institution or if individuals can do it ourselves," she tells Bustle.

She got the answer she needed and left to work in government relations and then at Planned Parenthood. With news appearances, speaking engagements, and two historical books under her belt, Imani now uses Instagram Reels to educate.

In August, Imani launched "Smarter in Seconds" — 15-second (and soon-to-be 30-second) videos based on questions she gets around everything from consent to to race. Her lessons took off, with a recent Reels on acknowledging guests without using gender amassing 3.3 million views.

But with a big reach comes challenges. There are those who think she simplifies topics too much. There are the folks who react to her videos before watching them, and then there are people who think she's oppressing them by educating. Now, Imani limits comments to followers-only so she can hear from people who are invested — and keep her sanity.

Below, Imani shares career advice, her pump-up song, and what she'd tell her younger self.

What was a hurdle you experienced early on in your career?

Definitely a lot of imposter syndrome. I think that's something that many people experience, especially if you don't fit into these roles society gives to successful people — if you're not a man, white, abled, all different things. I say "imposter syndrome," but it's not just something that we invent in our own mind — it's from societal and internal pressures that make us feel these things.

Do you have a trick to beat imposter syndrome?

Know where it comes from, and don't feel like it's a personal failure that you don't believe in yourself. I had a feeling once that a job just hired me because they didn't have a Muslim on staff. At the same time, people at that workspace were making me feel that way, too. There are going to be those who want you to feel insecure, even though you're supposed to be on the same team, so understand that you're there for a reason and be empowered that they chose you for a reason, and you can make an impact.

How do you pump yourself up?

Sometimes I'll get comments that are like, "You just seem too confident, and that makes me uncomfortable." I'll put on Elton John's "The B*tch Is Back," which goes "I'm a b*tch, I'm a b*tch. Yes, the b*tch is back" — because yeah, sometimes you are, and that's OK. It's also not dictated by who you are but by how they perceive women in power. So I listen to songs that have up-tempo beats, exciting messages, just to feel like I'm in my body and also to remember that I'm providing other people a window into my insights and it's not always going to be loved by everybody.

My mentor, Feminista Jones, says, "Just because you're new to me doesn't mean I'm new to this." Nobody — even if they've seen your resume — is aware of everything you know and don't know. Sometimes in workspaces, people will decide, "Oh, Julie can't do that. She doesn't know how to code." Uh, Julie went to coding summer camp for eight years. You just never know somebody's experiences. Remembering that makes you deal with people in a much more compassionate way that's not informed by biases, expectations, or stereotypes.

Telling somebody to hide parts of themselves to make others comfortable. I started wearing a hijab in spring 2016 when I was working in government relations, but I was so nervous about it. Some say, "Don't give people something to judge you about." It's one thing to prepare somebody for bullying at school and another to say, "Hey, if a kid is mean to you, just go with it."

I think that the best thing we can do to equip historically marginalized people to be in spaces that are overwhelmingly held by people with privilege is to give them the tools to raise concerns — because concerns will rise. In a capitalistic society, the tools are capital, money, or compensation. It's also other things, like is HR the only mechanism for accountability? If the one Latina in the office is asked to translate materials is she being paid accordingly or tokenized? If an institution honestly wants to be more inclusive, then enrichment opportunities, growth opportunities, and fortifying hiring pipelines must be part of the equation.

What advice would you give your younger self?

I was trying to fit this vision of advocacy that I had. Due to societal and internal pressures, I thought I could only do one thing. So I would encourage myself to look at the talents I have and enjoy and realize that I don't have to pick just one — because I'm doing many right now. Today, I get to wear wacky outfits, which I've always loved doing, educate people, and have a big platform.

More like this
24 History-Making Black Women You Probably Didn't Learn About In School
By Ayana Lage and JR Thorpe
19 Instagram Captions For Celebrating Black History Month
By Ayana Lage
These Artists Are Reimagining Black History Month To Create A Better Future
By Katie Mitchell
Ashamed Of Your Screen Time Stats? Here's How To Change That
By Alexis Morillo
Get Even More From Bustle — Sign Up For The Newsletter
From hair trends to relationship advice, our daily newsletter has everything you need to sound like a person who’s on TikTok, even if you aren’t.