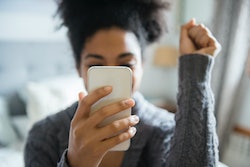 When a photo of plus-sized model Nyome Nicholas-Williams were repeatedly deleted and blocked on Instagram earlier this year, it prompted a very necessary conversation about beauty standards and racial bias on the platform. The #IWantToSeeNyome campaign was born and quickly gained support, forcing Instagram to listen. On Oct. 25, The Observer revealed that the social platform and its parent company Facebook will finally change their nudity policy to be more inclusive.

Alongside campaigner Gina Martin, who worked tirelessly to criminalise upskirting in 2018, and photographer Alexandra Cameron, Nicholas-Williams has made Instagram and Facebook listen. The social media outlets have said they will look into their nudity policy "more closely," having acknowledged that Nicholas-Williams' posts were intended to "demonstrate self-love and self-acceptance," and not pornography.

"As we looked into this more closely, we realised it was an instance where our policy on breast squeezing wasn’t being correctly applied," an Instagram spokesperson said to the Guardian. "Hearing Nyome’s feedback helped us understand where this policy was falling short, and how we could refine it.”

“This is a huge step and I am glad a dialogue has now been opened,” said Nicholas-Williams about Instagram's U-turn. “I want to ensure that I am respected and allowed to use spaces like Instagram, as many other creators do, without the worry of being censored and silenced.”

Back in August, the photo-sharing platform was accused of censoring Nicholas-Williams after a portrait – shot by Alexandra Cameron, featuring the model topless, with her eyes closed, and wrapping an arm around her breasts – was repeatedly taken down. “Millions of pictures of very naked, skinny white women can be found on Instagram every day,” Nicholas-Williams told the Guardian at the time, “but a fat Black woman celebrating her body is banned? It was shocking to me. I feel like I’m being silenced.”

The controversy that followed caused fans and fellow content creators – including blogger and author Stephanie Yeboah – to protest and post pictures of the model en masse. At the time, Instagram denied Nicholas-Williams had been racially discriminated against, citing its former policy on “boob squeezing” as the reason behind the image's removal.

The new policy on nudity will apply across Instagram and Facebook and come into effect from Oct. 28. According to ABC, it will mean "mean pictures where people are hugging, cupping or holding their breasts will be allowed, and if there are issues raised, Instagram will allow the content to stay up while it is being reviewed."

"There's still a lot of work to be done," wrote Nicholas-Williams on a celebratory post. "There is of course a huge racial imbalance in the algorithm that still exists as white bodies are promoted and don't have to worry about censorship of their posts but Black bodies still have to justify presence on the platform...But when we put our minds to it, we can achieve literally anything!"