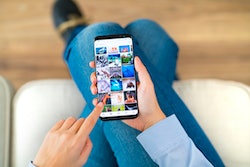 Prepare for your screen time to peak because Instagram just rolled out suggested posts. The latest feature from the social media platform will show you content Instagram thinks you’ll like from accounts you don’t follow when you reach the “end” of your usual feed. (Don’t pretend you haven’t ever gotten the “You’re All Caught Up” message after hours of late-night scrolling.)

For now, only photos and video posted to an account’s grid will show up in your suggested posts. You won’t see IGTV videos or content from the recently released Reels. However, you will see ads similar to the sponsored content that already pops up in your feed.

You’ll still see the “You’re all caught up” message when you reach the end of content from the accounts you follow. However, now you’ll have the option to keep scrolling forever just as the social media gods intended.

Suggested content is likely nothing new to your social feeds. Twitter will show you suggested tweets based on who you follow and the content they engage with. TikTok’s For You page is essentially an endless scroll of suggested content. Instagram’s suggested posts will be similar to its existing Explore page. However, your suggests posts will be directly related to content you follow whereas the Explore page will be relatedly more broadly to the content you engage with.

Of course, not everyone is happy with the new feature. If you are among the people asking how to disable suggested posts, I have some disappointing news: you can’t.

If a suggested post pops up in your feed, you have the option to tap the three dots (...) above the post. Then, you can select “not interested.” That response will influence Instagram’s future suggestions on your feed. However, you cannot hide the suggested posts altogether.

It’s unclear whether that will remain true given the amount of immediate backlash. Platforms like Twitter now allow users to turn off suggestions after similar criticism. Regardless, Instagram hopes you'll keep scrolling.

More like this
How To Change Your Instagram Bio
By Emma Carey
What Is A “Softboy?” The TikTok Term & Aesthetic, Explained
By Courtney Young
Why Are TikTokers Slapping Each Other With Tortillas?
By Courtney Young
Here’s Why Everyone On TikTok Is Getting “Krissed”
By Courtney Young
Get Even More From Bustle — Sign Up For The Newsletter