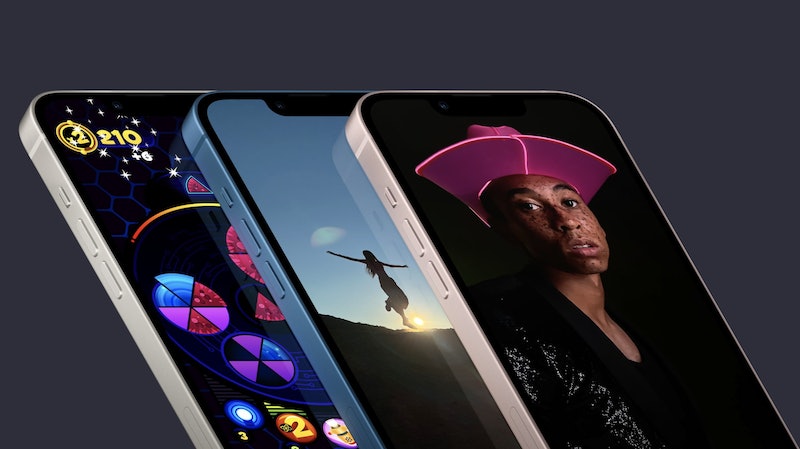 On Sept. 14, Apple’s virtual Keynote officially introduced the new iPhone 13 series, in an event that probably made a lot of people wonder if they’ll ever use an old-fashioned camera ever again. Featuring a variety of portraits and video shorts shot on iPhone 13, Apple showed off very professional-looking camera capabilities that will likely inspire a lot of upgrades. But apart from the camera update, how does the iPhone 13 compare to the iPhone 12? While most of the differences between the iPhone 13 and the iPhone 12 are subtle, there are some major changes that you’ll want to know about, especially if you’re on the fence about whether or not to invest in a new phone right now.

Depending on the ways in which you rely on your phone, you might be stoked or unfazed by some of the changes. For example, if you’re not much of a picture-taker, gamer, or social media maven, the improved processor and graphics might mot be enough to sway you into upgrade territory. But if your phone is your BFF, co-worker, compass, camera, and creative outlet, read on to be won over by the snazzy specs.

The new iPhone colors are so pretty, they might be reason alone to upgrade. The iPhone 13 and iPhone 13 Mini come in red, starlight (white), midnight (black), blue, and a very pretty, dusty, millennial pink. The iPhone 13 Pro and iPhone 13 Pro Max come in graphite, gold, silver and Sierra blue, which gives off major Blue Steel vibes. While all of the colors are neat, pink and Sierra blue are the only truly new colors to come with the update. iPhone 12s are available in purple, midnight blue, green, red, white, and black; the iPhone 12 Pros offered the same colors, except Pacific blue, which preceded Sierra.

The iPhone 13 Pro and Pro Max have a 6.1 and 6.7-inch display, respectively, which is the same as the iPhone 12 and iPhone 12 Pro Max. The only noticeable difference is a 20% smaller front-facing camera notch, which means more display area than the iPhone 12, and a 28% brighter, more vivid screen.

The new A15 Bionic chip is so efficient at doing a million things at the same time, it puts a lot less strain on the battery than the A14 predecessor. It also helps that the battery itself got a boost in size so you won’t have to stress about always being near a charger.

Aside from the rearranged diagonal camera lenses on the iPhone 13 and iPhone 13 Mini, the full iPhone 13 series has two major new features that make it appealing for photographers both aspiring and professional. Cinematic mode, which is like Portrait mode but for video, offers automatic focus on subjects in the frame and uber high-res picture quality. There’s also macrophotography capabilities on the iPhone 13 Pro and Pro Max, offering three times the zoom power over previous models. This means you can get super close to a subject without worrying about blurring or losing details — think: NatGeo-level picture-taking.

The two non-Pro 13 series models come with 128GB, 256GB, and 512GB storage options, because Apple realized no one is willing to delete enough apps or photos to fit their data into a 64GB phone. There’s also a 1T storage option for the Pro and Pro Max iPhones, which is the biggest storage offering ever, making this area one of the most substantial ways in which the 12 and 13 series differ.

Like many upgrades, most of the differences between iPhone 12 and iPhone 13 lie in user experience. Apple says that the A15 processing chip is faster than any competitor processor by 50%, so this means that you can do more, more efficiently. You can run various apps at the same time without lagging or loading, play video games with a more sensitive touch, and spend less time with your phone on the charger. Changes to the resolution, camera lens, and processor will make graphics look cleaner, brighter, and more brilliant.