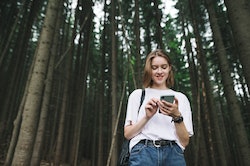 If all you have are quarantine boredom and a smartphone, everything looks like an adventure. Such is the theory behind Randonautica, an app that generates random coordinates near your current location and sends you on your adventuring way. The app picked up steam in late June after TikTok user @ughhenry posted a video in which Randonauting lead them to find a dead body. (Yes, they found an actual corpse. No, it’s not a hoax.) This may lead you to the inevitable question, “Is Randonauting safe?” In short, Randonauting is as safe as you make it.

The Randonautica app, which the site states is still in its beta version, asks you to share your location, set an “intention,” and gives you directions to a randomly generated endpoint. What will you find at your destination? Theoretically, something related to your set intention.

Like any app that has you venturing in the real world (i.e. PokemonGo), you are responsible for being mindful of your own surroundings. Just as you wouldn’t knock on a strangers door saying you’re trying to catch a Jigglypuff, you shouldn’t go Randonauting anywhere you otherwise wouldn’t feel comfortable. Randonautica’s site gives 10 tips to being a responsible Randonaut, including:

“Negative intentions are HIGHLY discouraged,” the site also states. In other words, the app isn’t encouraging you to creep into the insidious corners of your neighborhood. Randonauting abides by a “good vibes only” mindset.

If you’re concerned about your own privacy, Randonautica states that they don’t collect user data: “The only data that is stored on the server [are] user reports and data about the generated points." This does not include your starting point. They don’t require you to link to any existing social media accounts or input any personal information. So, your data remains completely anonymous.