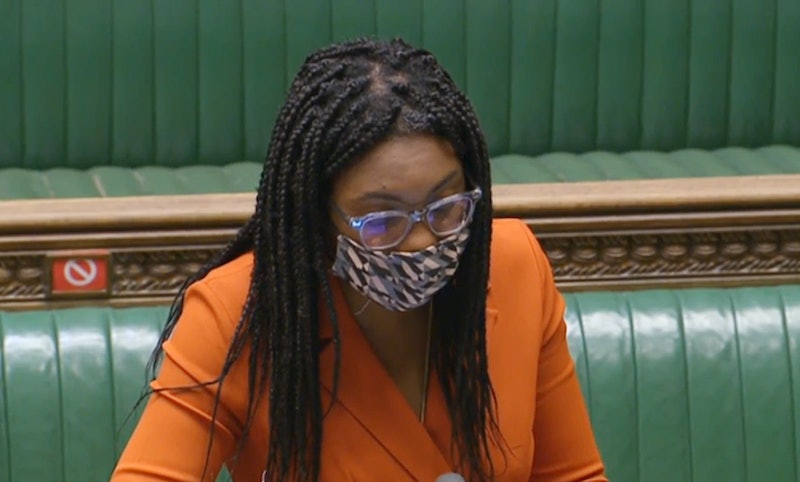 Speaking in Parliament on Monday, March 8, Badenoch stated that conversion therapy — which aims to change a person’s sexual orientation or gender identity — had “no place in a civilised society,” but, in response to demands for tougher regulations, she said that “robust” laws were already in place to combat extreme examples of the controversial practice.

Per the BBC, Badenoch went on to add the government had no plans to stop anyone who might be seeking “spiritual counselling as they explore their sexual orientation.”

As PinkNews reports, the comments sparked “deep concern” among LGBTQ+ organisations and campaigners including Stonewall, the LGBT Foundation, and Trans Media Watch. On Tuesday, March 9, the organisations penned an open letter to Badenoch and Minister for Women and Equalities Liz Truss arguing that these comments imply Badenoch has “been meeting with perpetrators of conversion therapy, and those who want the practice to continue.”

Per the Guardian, government advisor Jayne Ozanne resigned from the Conservative’s LGBT Advisory Panel on Wednesday, March 10, criticising what she deemed to be an “ignorant” attitude from Badenoch and Truss on key issues. “I do not believe this Tory government, sadly, have the best wishes of the LGBT community at heart,” Ozanne told ITV News following her resignation.

Hours later, two other LGBT advisors, James Morton and Ellen Murray, also stepped down from the government panel. In a scathing resignation letter to the secretary of state, Priti Patel, Morton criticised the government’s “mishandling of the potential Gender Recognition Act reform,” adding that he had “no confidence that the UK government wishes to protect the existing quality of life and human rights of gay, lesbian, bisexual and transgender people,” PinkNews reports.

Prime Minister Boris Johnson pledged to out-law what he described as the “abhorrent” practice of conversion therapy in England and Wales last summer. However, the government are yet to publish any findings of a 2018 consultation on the issue.

More like this
Prince William Condemns “Unacceptable” Comments Made To A Black Guest At Buckingham Palace
By Shahed Ezaydi
The David Beckham Qatar Controversy, Explained
By Sophie McEvoy
MOBO Awards Found Kanya King On The Woman Whose Grit & Determination Spur Her On
By Kanya King
Fans Are Calling For Kim Woodburn To “Return Her Gay Icon Card”
By Sam Ramsden
Get The Very Best Of Bustle/UK