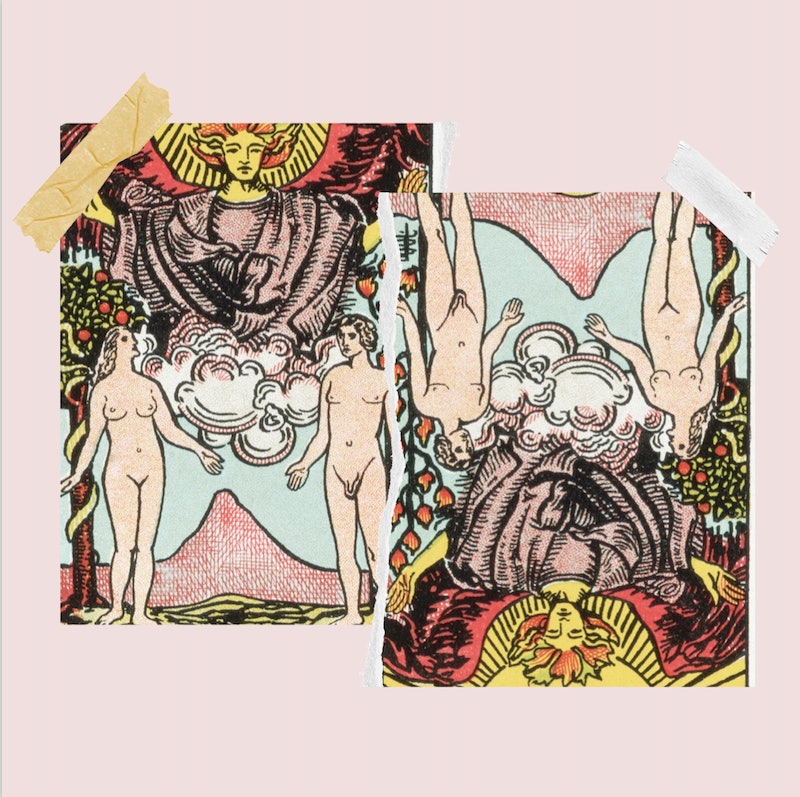 If you’ve dipped your toes in the world of mysticism, you may have crossed paths with the intuitive traditions of tarot. Maybe you’ve stumbled across tarot TikTok or have seen your favorite astrologers offer collective readings. Those who practice tarot use it for guidance in different areas of life like love, career, money, and more. If the Lovers card has shown up in your reading, you might be eager to get to the bottom of its layered meanings.

Before we jump into the Lovers card’s meaning, let’s get into a bit of context. Each tarot deck consists of 78 cards that are broken up into two subsets: the minor and major arcana, the Lovers card being part of the latter bunch. The major arcana cards signify archetypes and major life lessons you should pay close attention to. The Lovers card represents deep thinker Gemini, and if it has appeared for you, you may have a lot to think over, along with important decisions to make.

Has the Lovers card shown up in your tarot reading? If so, it’s time to double down on your needs and desires. Tumblr tarot reader Mónica Laura explains the energy of this card. Continue reading to find out what the Lovers tarot card can mean for you.

What Does The Lovers Tarot Card Mean?

Understanding the symbolism of each tarot card is only part of the practice. Certain factors work in concert to make a reading resonate, including the spread (the arrangement of each card pulled), your question, the manner in which the card was pulled (whether it was pulled upright or in reverse), and your intuition. When you’ve picked up the meanings of each tarot card, you can effectively move forward with your interpretations.

“Traditionally known as ‘a choice,’ the Lovers depict a moment in which you stop to ponder between two paths, options, or people, and acknowledge the communication or connection between the two,” Laura tells Bustle.

Simply put, the Lovers card means business. When the Lovers card makes an appearance, it’s likely you’re at a crossroads or have some sort of conflict, typically surrounding your relationships — whether that’s platonic, romantic, or professional. And depending on whether this card was pulled upright or in reverse, it can also signify union or tension within your relationships.

What Does The Lovers Card Mean When It’s Upright?

If you’ve pulled the Lovers card upright, it’s probably got some good tidings for you. In this orientation, the Lovers symbolizes balance and unions.

“When upright, the Lovers are the merging of opposites and the formation of a union or marriage,” explains Laura. “Acknowledging a meaningful bond can be as simple as sympathizing with another. You'll be swept off your feet by the sheer intensity of feeling, teamwork, active passion, sexuality, physical love, personal beliefs, and relationship values.”

The Lovers card doesn’t always mean a soulmate is headed in your direction or signal wedding bells. Like all cards, its meanings can fit in different kinds of questions. If the Lovers card comes up during questions about career or finances, it could represent financial balance, passion or balance in the workplace, or a union between you and an entirely new career. This card is generally an auspicious card, but like all tarot cards, there’s a flipside.

What Does The Lovers Card Reversed Mean?

As you get more use out of your tarot deck, you’ll eventually pull a card upside down, or in reverse. Pulling a card in reverse can have different meanings. For one, it can represent the shadow side of the card, otherwise known as its adverse meaning, which is typically the opposite of its upright meaning. The Lovers card in reverse can also symbolize its upright meaning, but applied to your inner self. Typically, its reverse symbolism can represent conflict or overwhelming choices.

Laura offers a darker meaning. “The Lovers in reverse, however, can signify sexual interest disguised as love. It's seduction purely for selfish reasons and knowing deep down that the object of your affection is not good for you. Familiar feelings for those who have the card pulled in reverse include indecision, loss of trust, and deception,” says Laura.

Like any card pulled in reverse, the Lovers card means it’s time to center your focus and take heed of sinister intentions surrounding you. If you’ve asked a question about romance or relationships, you could be dealing with illusions or a deceitful presence, but that deceit could also be your own convictions or ideas of relationship.

Don’t freak out if the Lovers card has shown up in reverse — it’s not always a nefarious thing. It’s really here to wake you up and take action. It can seem like your deck is telling you things you don’t want to hear, but often that’s when we need to hear it the most. Take each reading’s advice (both uplifting and blunt) as you would from a trusted friend who has your best interest at heart.