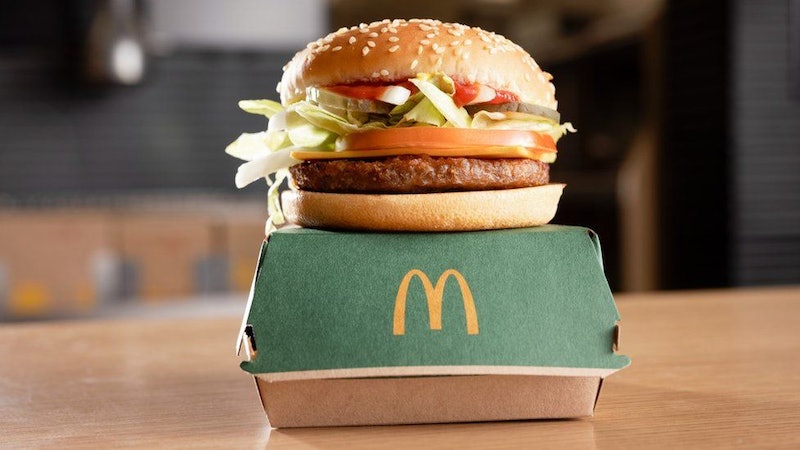 A new vegan burger will be landing in UK McDonald’s stores after “years of research” to perfect it, the fast food chain announced today.

The McPlant burger will be trialled in 10 McDonald’s restaurants in Coventry from September 29 before being expanded to a further 250 restaurants across the UK from 13 October. The list of restaurants can be found on the McDonald’s website here. The new menu item will cost £3.49 and has been modelled on McDonald’s Quarter Pounder Deluxe burger.

As mentioned, the chain has been working on this burger for some time now. In fact, they reportedly tried “hundreds” of options to ensure their plant-based offering was the very best it could be and contained quality ingredients.

The McDonald’s team finally settled on a vegan cheese made from pea protein with the help of their dairy supplier Kerry Foods in Ireland. The burger will also contain a “bespoke” vegan patty made by Beyond Meat, with plant-based sandwich sauce, ketchup, mustard, lettuce, onions, tomatoes, and pickles. The burger is cooked in an oven rather than a grill, making it a little different from other McDonald’s burgers, and is certified by the Vegan Society.

“We wanted to create the perfect build, with the same flavours, textures, tenderness and succulence of a traditional meat-based burger,” a spokesperson for McDonald’s said. “It took us longer [than other brands] because we needed to get the consistency right. Customers expect a certain taste when they visit McDonald’s.”

If you’re wanting to get your hands on one, you won’t have to wait too long. The McPlant burger is launching later this month in September in a handful of stores across Coventry, and then nationwide in October. It will be fully available at all McDonald’s branches in January 2022. The full list of store availability can be found online.

Across Twitter, reactions have been mixed to the news of a vegan burger. Many sound excited, with one user writing: “About time. BK one is really nice! Can't wait to try this one.” Others, however, are keen to see McDonald’s take further steps for people with dietary restrictions.

“But still no Gluten-free bun?? come on @McDonaldsUK it’s 2021. If you can do vegan you can surely do a gluten free bun,” said one.