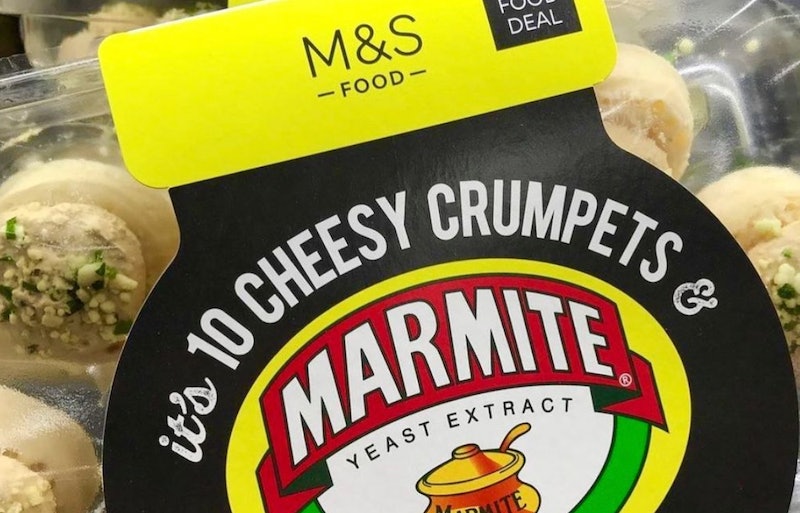 Right on cue for the festive season, Marks and Spencer's has unveiled its latest Marmite creation to divide opinion and cause a few family rifts. Following on from Marmite cream cheese, Marmite hummus, Marmite cheese twists and Marmite peanut butter are M&S's new cheesy Marmite crumpets. While I personally have never been a Marmite fan, I think these mini bites could make me a convert. We'll see.

Ready for the party season, the mini crumpets come in a pack of ten (£7), and, according to the description are "topped with gooey mature Cheddar cheese rarebit and melted Marmite topped with parsley." They recommend oven cooking for 12 minutes and serving to your Marmite-loving friends and family.

M&S announced their "bad boy" Marmite creation on Instagram and promised that the cheesy crumpets are "NEXT LEVEL." "We Mar-mite have gone and done it again, with our NEW EPIC Cheesy Marmite Crumpets! these bad boys are in store now and ready to WOW!," they wrote.

Whether you love them or hate them, the Marmite and M&S collaborations certainly get people talking and M&S fans had a lot to say. "Heaven in a crumpet!!," wrote one hardcore Marmite lover. "What no way!!! I neeed these in my life," said another in the comments. These mini-crumpets are already a big win.

Oh, go on then — I'm convinced. Since I've never been one to turn down a crumpet, I'm tempted to try these Marmite-topped mini bites.

If you also want to let curiosity get the better of you, you can find the crumpets in M&S stores this week. Whilst you're stocking up, you may also fancy M&S Marmite cream cheese and Marmite butter that were released earlier this year.

Head to the M&S marmite page for seriously unique recipes too. "Why not top a rump steak with a generous portion of the butter for added meatiness?" teases M&S. Hmm, sounds risky, but I like it. It also suggests "melting Marmite® butter on your potatoes, corn on the cob or roasted parsnips for extra depth and saltiness."

As always, M&S really knows how to sell it.