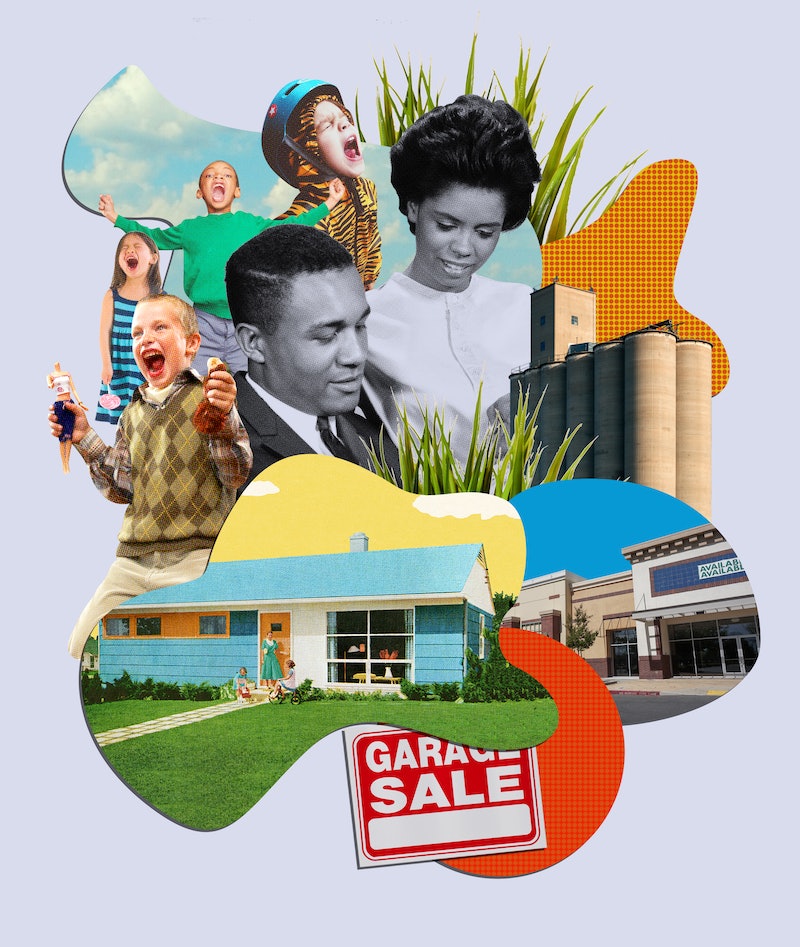 One of the most striking things about the suburbs, when you actually go there, is how they simultaneously do and don’t resemble The Suburbs as portrayed in, well, most of American post-war pop culture. Yes, the lawns can look like Donna Reed herself manicured them, and the holiday decorations may be… imposing, but if you take a stroll through Chesterbrook or Potomac or Sugar Land, you’ll see things that Nick at Nite and The CW never indicated you could hope for in the supposed pale, big-box blandness of life just outside a city: Apartment buildings. People who aren’t white. Electric cars. The tweens whizzing by on skateboards have never even been to a mall, and some people don’t even have kids. There are bars.

“The reality is, the [suburbs] were never entirely white, affluent, middle class. There have always been Black suburbs, they’ve always been the manufacturing and industrial suburbs,” says Ellen Dunham-Jones, director of Georgia Tech’s Urban Design Program and author of Retrofitting Suburbia: Urban Design Solutions for Redesigning Suburbs. So, before you let visions of Ice Storm ennui permanently shut down any possibility that you’d ever in a million years become a suburbanite, join us in investigating whether it’s really a Stepford world after all.

Make no mistake: America’s history of residential segregation is long and ongoing; a recent report out of the University of California at Berkeley found that America’s neighborhoods were more segregated in 2019 than they were in 1990. But the suburbs, at least, are showing progress. “It was happening even pre-pandemic that suburbs were increasing diversity faster than cities, even as the entire U.S. is becoming majority minority,” says Susan Wachter, Sussman Professor and professor of real estate and finance at The Wharton School and co-director of the Penn Institute for Urban Research, both at the University of Pennsylvania.

According to Dunham-Jones, Black Americans have lived in suburbs in substantial numbers since the ’70s, which finally saw a decline in redlining, a policy by which the Home Owners’ Loan Corporation quantified the riskiness of issuing a mortgage based on an area’s racial composition. Areas with a high proportion of minorities were marked red — translation: “high risk.” The shift didn’t start until a decade after the Fair Housing Act rendered redlining illegal, but there are now majority-Black suburbs where the cheapest home costs over $1 million.

In the last 30 years, the suburbs have also become more international. “The majority of new immigrants to the U.S. are landing in the suburbs, not in the central cities,” Dunham-Jones says. Starting in the 1990s, as the suburban housing built in the ’60s aged, the affluent began moving further out or back into newly revived inner cities, leaving a middle belt of suburban housing that immigrants could afford.

This happened even in areas you might think of as heavily segregated. Georgia’s Gwinnett County, right outside of Atlanta, was predominantly white as recently as the early 2000s. “It was an old boy, white power network,” Dunham-Jones recalls. Like many demographically similar areas across the United States, it had consistently voted down public transit in an effort to make it harder for anyone low-income to get there.

Today the community looks and behaves very differently. “They’ve got two districts that are struggling with 20 or 30 languages of kids,” she says. In a referendum last year, Gwinnett County came within 1,013 votes of adding public transit, and a diverse, newly-elected county leadership is already planning the next referendum.

Suburban Myth #2: Everyone Is The Same

Since the suburbs were developed, two ideas about them have prevailed. First, thanks to aggressive Cold War-era propaganda, homeownership in a cookie-cutter suburb (and the white, single-earner nuclear family barbecuing in the yard) became the American Dream. Then in the late ’60s and early ’70s, the suburbs, along with the dream, came to be seen as stifling and conformist in a way that no one with a brain — or a soul, for that matter — could tolerate.

Now experts argue that, in addition to diversifying in other ways, suburbs are becoming less sequestered ideologically, and as a result, more appealing to creative, independent thinkers. “There was a whole literature — John Cheever, whatever — about the ails of the suburbs, how deadening it is, right?” Wachter says. But now that the suburbs aren’t defined by a singular race, income level, or family structure, she argues, that is changing. “The suburbs is no longer a separate way of life. They’re not metaphorically distant, either in who lives there [or] in what people do who live there. People who live in these newly vibrant suburbs are ... absolutely part of the global workforce, and not only necessarily tied into global corporate networks but also creative. That was part of the knock on suburbs, that the creatives could really prosper only where the[re were] other creatives, which w[as] just cities. But I think that, too, is likely to become dispersed as we develop communities online. It’s very liberating.”

Suburban Myth #3: They Are Only For People With Kids

While the suburbs still attract plenty of young families, “it’s not the majority who are young families anymore at all,” Dunham-Jones says. To put stats to it, “30% of suburban dwellers have children, and 26% of city dwellers have children,” says Ann Owens, associate professor of sociology at the University of Southern California, citing data from the U.S. Census 2012-2016 American Community Survey. “I find that residential segregation between households with and without children is pretty low — most neighborhoods consist of both types of households. Segregation by household type (those with or without children) between cities and suburbs has declined since 1990. The city-suburban divide has become less important in shaping where households with kids live.”

Thanks to many employers’ post-pandemic tolerance for remote work, childless people no longer feel tied to expensive cities by their careers, which means you can expect to see more and more young, single professionals moving to the ’burbs.

During the pandemic, “the initial thought among urban economists was that the agglomeration economies of the big cities, it was still going to hold, and that young people will want to be seen. They want to go back to cities, get into the office. They will want to socialize in these large cities,” Wachter says. “Surprisingly, what we’re seeing in the data is, that’s not completely so — that young people are also redesigning their future... [they don’t] always need to be at the large centers of activity and seen by the boss.”

Instead, they might now lay down roots in the town where they grew up, or just a place with trees where they can actually afford to buy a home.

Suburban Myth #4: Every Lawn Is An Island

Adults without kids may not require as much space as the suburban home traditionally offers, and they may not want to live alone, either. The type of residential development we’re most likely to see in suburbs going forward is a low-rise, multiunit apartment complex that will appeal to residents in a wider array of family and financial circumstances. In just the second quarter of 2021, construction of multifamily buildings in suburbs increased by more than 10%. If implemented, President Biden’s proposed infrastructure plan will encourage that trend by limiting the amount of land zoned for single-family homes, and thus inaccessible to lower-income people, and increasing the amount zoned for multiunit structures.

Dunham-Jones says the suburbs now reflect a generational shift in how Americans define prosperity. “In most of the world, the history of civilization is a history of the pursuit of privacy. As you get more wealth, you get more privacy.” In the United States, 85% of land in major metro areas is currently zoned exclusively for single-family dwellings. “The suburbs up until now have mostly been: ‘I have my house, I put a fence around it, I have everything I need more or less, inside the house, nobody can tell me what to do, and I don’t want to share it with anybody else.’”

She argues that this success-as-sequestration model hasn’t made us happy (see: the loneliness epidemic, white despair) and says that a more communal model is emerging. In those low-rise suburban apartment buildings, burdens that individual families currently bear alone — like finding child care — could be shared.

Yes, you may get more square footage for the same money, but out in the ’burbs, the name of the game is maintenance. If you rented in the city but now own on the outskirts, you’ve got property taxes and homeowners insurance you didn’t have before, and that’s before you kick in upkeep and repairs. Then there’s everything you’re going to need if you do have your own lawn to tend, or the $250 per month, give or take, that you would have to pay someone to do your mowing and aerating for you.

Even if you don’t own or have a yard, you’ll have the cost of owning a car, which the design of most suburbs still makes necessary. According to AAA, the average American car owner spends between $7,000 and $11,000 annually on auto insurance, gas, and car loan payments combined.

Suburban Myth #6: There’s Nothing To Do

Suburban social life has traditionally centered around K-12 school, but suburbanites without kids, especially those who once enjoyed city life, want something different. What that is already starting to look like is “walkable, mixed-use town centers,” Dunham-Jones says. In addition to a rich and under-appreciated food scene and the respectable bar culture that already existed in many suburbs, these new developments mean residents can now expect and enjoy “little programmed parks, the yoga classes, the farmers market, the festivals, the concerts, activities that can help bring people out of the house.” Ironically, they’re increasingly springing up in redeveloped malls, big-box stores, and other husks of suburbia past. “Both the supply of defunct suburban commercial property and the market demand for walkable/bikeable urbanism remain very strong.”

These “Zoom-lets,” as Wachter calls them, don’t feel exactly like a city, of course. “It’s not authentic. It’s Instant Urbanism,” Dunham-Jones says, and she warns that not every suburb will suddenly become a millennial wellness dream. Developers and zoning boards typically green-light these projects in areas that have already seen a successful and well-received downtown revitalization project.

Still, the new suburban work-from-home class is likely to accelerate it. If you can climb the corporate ladder from the farmers market, why wouldn’t you?

More like this
24 History-Making Black Women You Probably Didn't Learn About In School
By Ayana Lage and JR Thorpe
25 Inspiring Quotes From Black Women To Celebrate Black History Month
By Kyli Rodriguez-Cayro and JR Thorpe
Amazon's Selling A Ton Of These Cheap Things That Make Your Home 10x Cozier
By BDG Commerce
The 5 Best Blankets For Puppies
By Jenny White
Get Even More From Bustle — Sign Up For The Newsletter
From hair trends to relationship advice, our daily newsletter has everything you need to sound like a person who’s on TikTok, even if you aren’t.