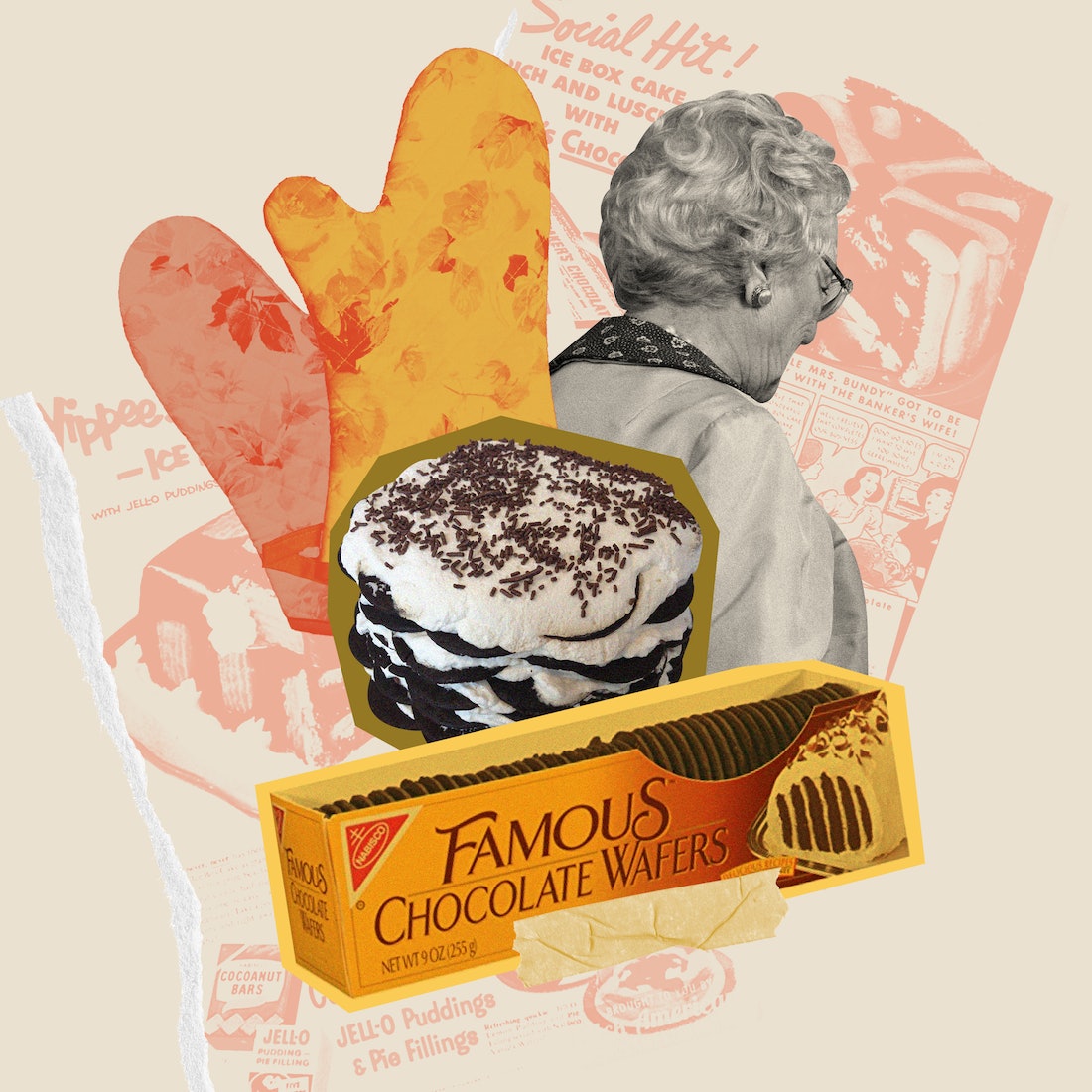 They are also not a whole food. They are not organic. They are not local, unless you live near a National Biscuit Company factory where they are produced. Like so many packaged, low-cost American snack foods, they are full of food-adjacent substances that, when consumed in large quantities over the duration of a lifetime, have been linked to the development of Type II diabetes, dental cavities, and other maladies. Nabisco Famous Chocolate Wafers are unnecessary to any nutritional plan and exemplify the worst of the Standard American Diet. And I love them very much, and I am going to tell you why.

My grandmother, Jean, always made a holiday icebox cake for us out of these wafers, as well as sugar and heavy cream. Befitting the name, it required only a refrigerator and did not involve the use of the Chambers stove she had for 40 years in her kitchen, in a house my grandfather designed and helped build. Sometime in the late ‘90s, the Chambers stove was carted away and a new stove was carted in. She missed the old stove desperately and said the new one never worked as well. She died in August of 2018, and Thanksgiving and Christmas of that year would mark our first holidays without her. My brother, Steve, who had taken over icebox cake making duties a few years prior, planned to make them in her honor.

Even if you are raised by your grandmother, you get one version of her, maybe two or three over the years when your lives overlap. There’s no way you get the whole person.

But there was trouble in the grocery aisles that year, The Year of the Great Nabisco Chocolate Wafers Shortage. The product mysteriously vanished from store shelves. According to Amy, the helpful headmistress of the Nabisco Famous Chocolate Wafers Fan Club on Facebook, someone on the digital team at Nabisco told her, also via Facebook, that the company was “temporarily removing the impacted product at stores and warehouses out of an abundance of caution because it does not meet our high quality standards. We are carrying out a full and thorough investigation into what has caused this quality issue.”

This investigation threw the fan club into a panic and, when I relayed the news, threw my family into an equal or greater panic.

In a 2004 article for The Washington Post, writer Candy Sagon enlightened the uninitiated on the history of this treat: “The cookies have been around since 1924, according to Nabisco's archives. Uneeda Bakers, a long-ago division of the National Biscuit Company (now just known as Nabisco), originally offered the simple chocolate wafers as well as ginger and sugar ones. Those two flavors eventually were discontinued, but the chocolate ones have endured.”

My grandmother had been around since 1925, making her one year younger than the substance that would form the infrastructure of one of her most reliable hit desserts.

Even if you are raised by your grandmother, you get one version of her, maybe two or three over the years when your lives overlap. There’s no way you get the whole person. This is true of parents as well, of course. You do not know their every whim, their every memory, their every scuttled desire and unrealized dream. You don’t hold them as a baby or speak to them in their toddler gibberish when they start to vocalize that strange mix of personality and biology and cognition and cultural detritus we call consciousness. You know of your elders what they let you see. Sometimes that’s a lot. Sometimes it isn’t much at all.

Jean did some of the childcare when I was growing up, as my parents took turns going to night school for their graduate degrees. This was no sweat for her. She had been a stay-at-home mother of four, before they got older and she went to work as a secretary at Mack Trucks.

Now that she was retired, she cooked for us, and far better than the Irish-American stereotype would have you think. She made roasts and potatoes and onions and various other things — simple, hearty, tasty things she served to us on her yellow Formica kitchen table. The food wasn’t particularly spicy or complex, perhaps, but it was filling, and it was good.

I was an adult before I heard what happened in our family in the ‘60s, when it was easier for a desperate husband to commit his deeply ill wife to an institution.

For dessert, Jean’s repertoire extended far beyond icebox cake, of course. She also made “candy cake,” an oatmeal spice cake with a layer of sweetened shredded coconut and chopped walnuts baked on top; dark chocolate pudding with the skin on top; a fine angel food cake; a dark green Jell-O ring with some kind of fruit I can’t recall; and plenty of other things that combined the popular foods of her pre-War youth — people in the ‘30s apparently ate a lot of Jell-O — with their multitudinous post-war descendants.

Writing in the Post, Sagon dates the appearance of the icebox cake recipe to a 1929 Nabisco advertisement; it is still printed on every box. I won’t reproduce the recipe here because I am not sure when, if ever, proprietary recipes hit the public domain. I certainly do not wish to incur the wrath of Mondelez International, the conglomerate that purchased Nabisco from Kraft in 2012.

But an icebox cake recipe rather than a Famous Nabisco Chocolate Wafers Icebox Cake ™ recipe is quite simple: whip some heavy cream with sugar, pile chocolate wafers of any corporate brand origin or perhaps a homemade version into stacks with hearty daubs of the dairy concoction, nestle said stacks beside one another in a glass dish, paint over the top of the whole thing with more whipped cream, pop on a glass top or stretch plastic wrap over it, and chill for six to twenty-four hours.

Sagon’s mother made it lengthwise, in log form, and dusted cocoa powder or chocolate gratings over the icing; this seems like a brilliant idea, albeit somewhat blasphemous, as it’s not how my grandmother did it.

Jean was sweetness and light to me, so I didn’t know until my twenties how greatly she suffered from depression and alcoholism. I was an adult before I heard what happened in our family in the ‘60s, when it was easier for a desperate husband to commit his deeply ill wife to an institution for a course of treatment. I do not think my grandfather did this in order to be cruel, and I can only imagine how hard it was to raise four children with a partner who dealt with bouts of mental instability, especially before modern conversations about mental illness and the pernicious power of addiction. She once threw a phonebook at him when he insisted on videotaping her in the kitchen, her kitchen, with his brand new Camcorder. This is not a rumor — when I was a kid, we used to watch the tape. Back then I thought it was kind of funny, except for the unfamiliar anger in her eyes.

I will assume alcohol played a role in her decision to throw the phonebook, but quite frankly she could’ve done it stone cold sober. In addition to a will of steel, she had a good arm. She loved chocolate, fair and equal pay for women, civil rights, church when the priest did a good job (she was an Irish Catholic Democrat of the progressive sort), “Murphy Brown,” and “The Young And The Restless.” She did not like cameras, gossip, or intrusion.

By the time I remember her, she was sober. We didn’t talk about her fearsome bouts with mental illness, except when I started to struggle with panic attacks and suicidal depression. She was enormously encouraging and thoughtful. She always said, “Remember, this too shall pass. It really does get better.” She prayed on her knees every day, and she believed in a loving God.

I thought the chocolate was a charming quirk of hers until I got sober myself and learned that sometimes alcoholics desire sugar more than the “normies” of the world.

She was a wonderful grandmother who had been an imperfect parent, and who am I to say how she might have done it differently? I did not have my first kid when I was barely out of adolescence. In fact, I don’t have any kids at all. I did not turn down a scholarship to college in order to raise four of them, and I didn’t get my driver’s license in my thirties to go to the job I got to help send those children to college. You know what I waited until my thirties to learn? Cooking. Baking. Basic self-care. Boundaries.

My grandmother outlived my grandfather by five years, during which she ate a few more icebox cakes and consumed chocolate like a vacuum, without consequence. I thought the chocolate was a charming quirk of hers until I got sober myself and learned that sometimes alcoholics desire sugar more than the “normies” of the world and that candy, in small doses, can sometimes really help somebody who is trying to stay off the sauce.

The week my grandmother passed away, she asked for chocolate at least twice and got it, too. I brought her ice cream at the hospital where my brother and mother and I were born, and where a lot of people in our family die. She enjoyed the ice cream and talked to me about how pissed she was at the then-president. Her newest great-grandchild, my brother’s son, crawled around her bed like nothing was wrong. I suppose, in a way, nothing was. She had a long life and, a few days later, a comfortable end, surrounded by love. Four months after she died, Steve made the icebox cake for Christmas. The chocolate wafers had come back after all.

My grandmother was born after the last global pandemic, and she died before the one we all just endured. It’s been the sort of year that makes you reconsider things. I moved back East. I bought a home. I am learning to cook, finally, and I’m going to make icebox cakes this year, in my own kitchen.

I generally avoid refined sugar because I am attempting to lead a reasonably long and healthy life, at least until I find out how the arc of Viola Davis’s entire career plays out. But I am going to order the chocolate wafers off the internet, and I will do the things my grandmother did to make them extra delicious.

It’s a cautious time, and not everybody is up for socializing, but maybe the cakes would make a good gift. I’ll make my icebox cakes in the first home I’ve ever owned, and I will feed them to my new neighbors (if I ever meet them) and my new friends (if I ever make them), and I will tell them stories about my grandmother, if they’ll let me. I hope they will let me.