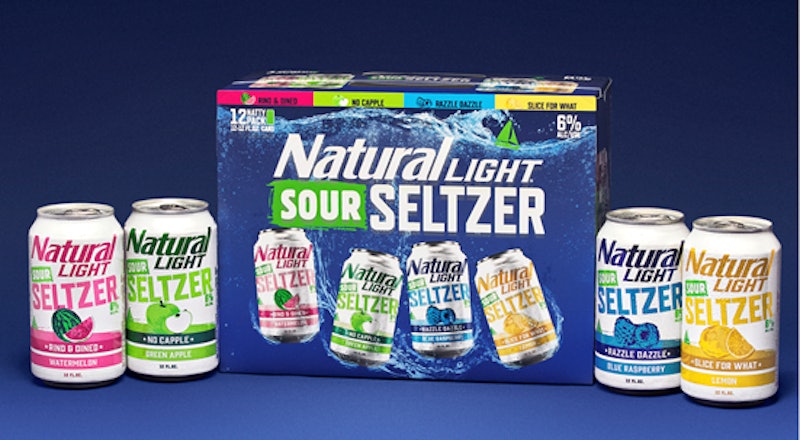 Summer is just around the corner, and there’s no better way to celebrate warm weather and fewer layers than a boozy night. Hard seltzers are super popular right now and this summer will be no exception. The spiked bubblies are here to guarantee a good time and an even better buzz. Natty Light has shown up yet again, and has introduced Natural Light Sour Seltzer for a limited time only.

This year, the company continues to expand its flavor portfolio with the addition of the Natty Light Sour Seltzers, and the seltzer’s names, dare I say, may be the most exciting part? The variety pack includes four deliciously refreshing seltzers — Rind & Dined Watermelon, Razzle Dazzle Blue Raspberry, No Capple Green Apple, and Slice For What Lemon.

Natty’s Sour Seltzers have 6% ABV and are offered in 12-ounce cans in a variety pack of 12. However, Rind & Dined Watermelon is also available as a 25-ounce singular can.

In addition to the sour seltzers, Natty Light has recently announced the release of its new boozy Naturdays Lemonade Popsicles, and the hype has been real. User @SheilaA97266727 tweeted, “This would be amazing on a hot summer day!” Another user @imancurtiss tweeted, “I want the natty light sour seltzer’s so bad I had a dream about following the natural light truck to total wine.”

The boozy icicles available in strawberry lemonade and pineapple lemonade flavors and have an 8% ABV. Similar to the sour seltzers, the pops are available nationwide for a limited time, so snag them while you can.

Starting in June, Natty Light will travel nationwide with a lemonade shack to promote its newest summertime refreshments, and fingers crossed, that includes the Natty Light Sour Seltzers. Stay up-to-date on the companies’ whereabouts through its social media outlets.

Natty Light’s new sour seltzers are exactly what your taste buds needed this summer. Run to the store, and pop open those coolers, because the sour seltzers won’t be around forever.