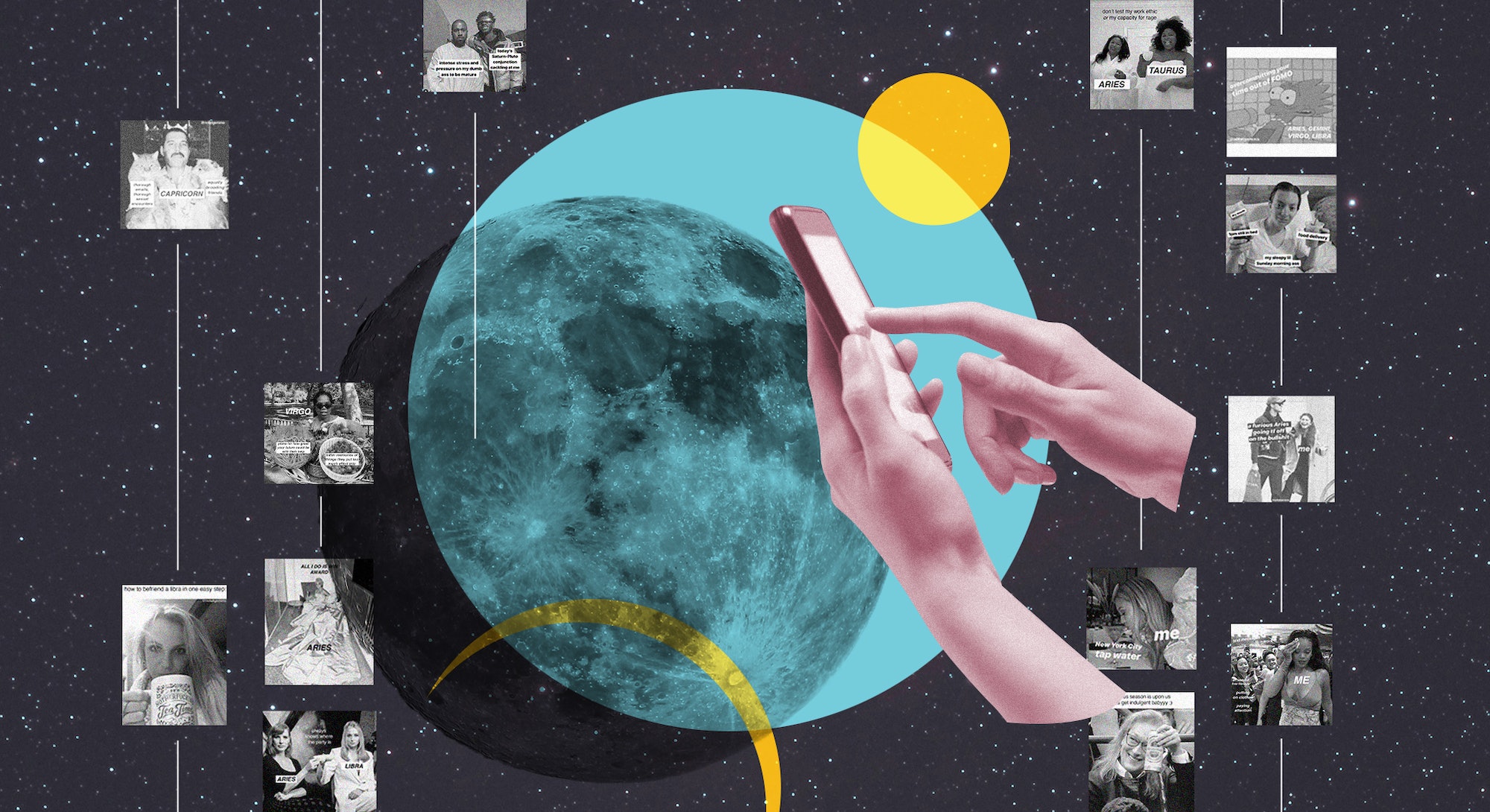 Getty/@NotAllGeminis/Margaret Flatley
By Laura Beck
May 21, 2020

Courtney Perkins answers FaceTime with a bewildered expression on her face and a bowl full of mac and cheese in her hands. Turns out she’s completely forgotten about our interview and was just about to dive into the queen of comfort foods — and you know what? It’s easy to forgive her. Not only because we’re living in unprecedented times and it’s hard as hell to remember anything, but also because she’s a Gemini, and this is such a Gemini thing to do.

Perkins isn’t famous, but her work is. She’s the astro-meme-creating machine behind the popular @NotAllGeminis Instagram account, whose memes — like this perfect encapsulation of Geminis and this even more perfect encapsulation of girls with blue eyes — have hit a nerve with people who deeply identify with their sign’s characteristics. Turns out, that’s a lot of people: As of publication, @NotAllGeminis has nearly 600,000 followers.

The 24-year-old Austin, Texas, native studied dramatic writing at NYU’s Tisch School of the Arts before moving to Los Angeles two and a half years ago. Shortly after, she started @NotAllGeminis, born from her obsession with knowing everything about a person using their zodiac sign as a guide. “I have a horrific database of the sign of every person I've ever interacted with,” Perkins says. “And my computer broke in December and I paid like $200 for data extraction just to get that one folder. I couldn’t lose all that information — it's too important!”

Perkins says she got into astrology in elementary school. “I just started reading this website that used to exist called Zodiac Girlz. It has since been taken down, but I loved it,” she says. “I even got a little Gemini T-shirt for my fifth grade birthday. And then in middle school, it was like, ‘OK, what's my crush’s sign?’”

In high school, she dove into memes and then in college learned Photoshop while working at a comedy magazine. Later, Perkins started @NotAllGeminis just as a fun thing for her friends when she was stuck in a particularly unfulfilling and unstable production assistant job in Los Angeles.

“I was just slamming my head against the wall, trying to think of what to do with all the down time, and so I started making astrology memes,” she says. “It was meant for my 30 dearest friends but it quickly became something bigger. It took off pretty fast, organically. I've never bought followers or anything. I was really lucky in the fact that I had just moved from New York and I'd been living in L.A. for a few months — and since I’m from Austin, I've got a ton of friends there… and they all would just share it to their friends.”

One of the reasons for Perkins’ popularity could be that largely nonreligious millennials are interested in something spiritual that’s not so intense — although sure, there’s the occasional battle in the comments. But largely? “We’re not having crusades over astrology,” she says.

She adds that a key component to many major religions is that God is viewed as “above” the followers. “Astrology feels like an equalizer,” she says. “Everyone in the world has a birthday.”

Perkins says that although people turn to astrology in times like these to look for answers — “I think when our fears are large and looming, [astrology] adds order to make sense of the chaos” — her account actually hasn’t experienced a major uptick in followers. “It’s being countered by the amount of people trying to reduce screen time or use this time as a break who are deleting Instagram for the sake of their own mental health,” she says. There’s also a new platform competing for eyeballs: “TikTok!”

That said, there’s a lot going on, astrologically speaking. “Saturn and Pluto are closer than they have been in years, and every time that happens, some sh*t goes down,” she says. “The same things are going on in the sky right now that were going on during the 1918 influenza, the Black Plague, and I think the Great Depression.”

Although Perkins cautions that she’s more of a commentator on astrology than an astrologer (although she’s done plenty of reading on the subject), she believes that we can break down what’s happening right now, planet by planet. “Mercury was retrograde in Pisces during February and March — a phenomenon that affects communication and travel for the worse,” she says. “Pisces is already a sign associated with confusion, as its ruling planet, Neptune presides over magic, but also illusion.” She says that’s when the spread of the virus began taking off around the world — during a time characterized by misinformation.

Perkins adds that many astrologers are currently looking at the outer planets, saying that in January, Pluto (planet of transformations) and Saturn (planet of rigid structure) met for the first time in almost 40 years. She also says Pluto and Jupiter will be traveling within a few degrees of each other over the next year, and that Jupiter, as the planet of expansion, amplifies whatever it comes across. In this case, that would be Pluto, the planet of transformations — and viruses. “The same phenomenon took place during the 1918 influenza,” she says.

Astrology has always been a salve in Perkins’ life, and that’s true now more than ever. “It’s a gateway to the conversations people really want to [have],” she says. “It’s a bonding experience to talk to someone about their birth chart and see what kinds of questions they ask because it indicates what they really care about. I take comfort in growing closer to people through astrology.”

And, just like her bowl of mac and cheese, there’s a lot of comfort in that right now.