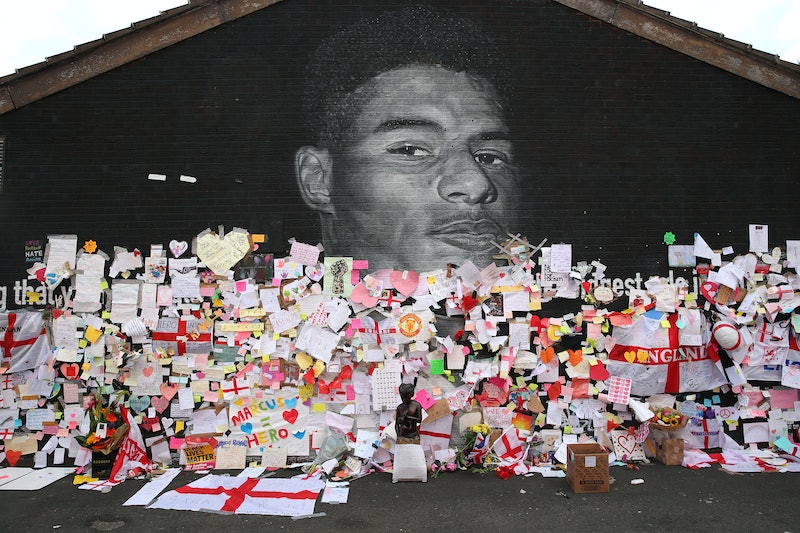 Thousands of notes left on Marcus Rashford’s Manchester mural are to be moved on Friday (July 23) ahead of heavy rain forecast for this weekend. The heartfelt messages, left by fans on the mural in Withington in a show of solidarity with the football star, will be removed for safekeeping amid plans to preserve the notes permanently.

The international striker’s mural, painted in November 2020 by street artist Akse in tribute to Rashford’s work on child food poverty, was defaced on July 11 following England's Euro 2020 defeat. It came amid a spate of racist abuse targeted at Marcus and his fellow players Jadon Sancho and Bukayo Saka.

After the mural was vandalised, hundreds of fans within the community and across the country travelled to leave their own messages of support and to cover the graffiti. Now Manchester City Council have approached Rashford to ask how he would like the notes to be preserved in the long term in order to create “a lasting legacy of tolerance, love, and solidarity for future generations to learn from.”

“We think it's important [that] this shared moment of solidarity is remembered and preserved for future generations,” said city council deputy leader Luthfur Rahman. According to the Guardian, one suggestion from Rashford's team is digitising the notes so they have a greater lifespan and can be accessed from around the world.

On Friday, a team of archivists and conservators from Manchester Art Gallery and Central Library Archives will carefully remove the tributes and take them to Manchester Central Library, where staff will separate, record, and photograph each message amid fears that the coming change in weather this weekend could lead to the notes disintegrating. Due to the sheer volume of notes, whole sections will have to be lifted and then separated at another site, per the Guardian.

It hasn’t yet been decided exactly how the messages will be preserved and displayed in the long-term, with the priority at the moment to protect them from the weather. However, teams from the Withington Wall’s community project, who first commissioned the mural along with the Manchester Art Gallery and the Central Library’s Archives department are in discussion about how best to display the collection. Experts from the People’s History Museum, the National Football Museum, and the University of Manchester are also involved in the project.

A spokesperson for Withington Wall’s said that the outpouring of support for Rashford following the torrent of online abuse hopefully represented a “fork in the road” in terms of progress and equality, and said their team welcomed this moment of “social and cultural history” being recorded for future generations.